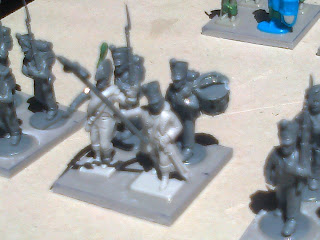 Mixing and matching the three* main napoleonic 28mm plastic brands is  almost a hobby inside the hobby for me. The possibilities are endless. In the above pic the two Victrix front bodies have Perry parts. To be honest I just forgot some figures at my parents basement, so I had to improvise for the night as petrol is more and more expensive.

In the rear rank a Perry fusilier had his musket carved off and replaced by a drum that he carries at his back. 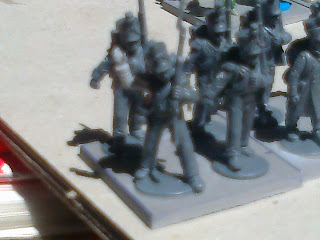 The figure waving is a Perry skirmisher with the left arm bent by the heat of a lighter and the right one replaced by a Victrix arm. 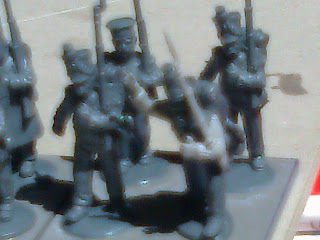 Same trick to the other bending Perry skirmisher again with Victrix arms. The epaulettes are still missing and will be done in ... Evergreen! Good guess ! Congratulations! 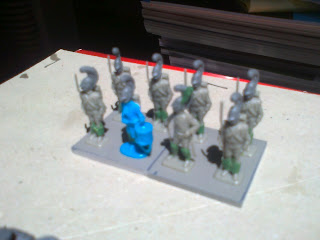 More to do here: Hat French Voltigeurs with their heads carved off and replaced by Perry Carabiniers ones and Greenstuff trousers (Really?). Hat got things a little mixed up here as Voltigeurs, which were in reality small guys, are bigger than their Fusiliers (see the fusilier drummer for comparison). But I knew one day I would find a place for them. Now they turned into  Génie de La Garde Imperiale. There was only one company of these with Napoleon at Waterloo, two stands are an exaggeration but they look nice this way.They are all standing as they remained pretty quiet all battle. 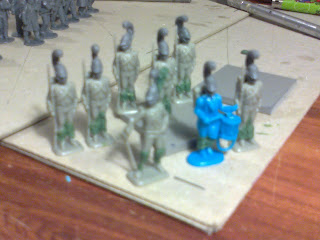 * Don´t want to be unfair to Warlord. Their figures are fantastic but they still have only a handful of excellent plastic boxes. But as one piece marching figures, they tend to be less convertible, which is by no means a fault, on the contrary. Their next French Infantry 1808-12 is awesome, as are the previous Prussian Landwehr and Russian infantry. See it at their website!

Posted by João Pedro Peixoto at 06:18