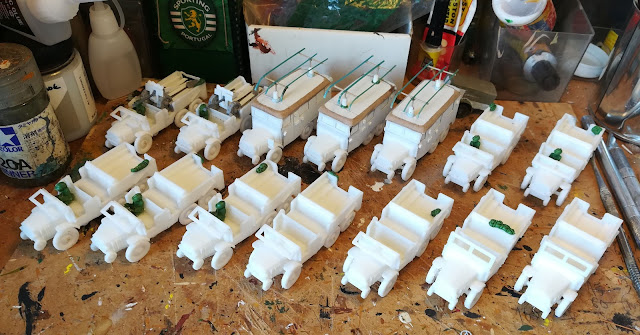 According to Masters Richard and Colin we need 18 Laffly S20 of different types for the three battalions Dragons Portés in a DLM. Four are already built and painted, three from SHQ and another from MiniGeneral.
This post is about the last 14 of them, all MiniGeneral, and two new models made out from their basic and very nice Laffly S20TL. 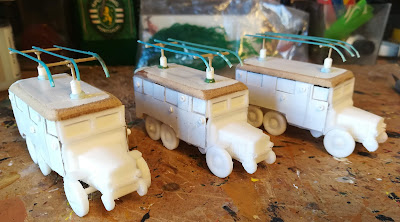 I wanted something different for the HQ company. The Blitzkrieg supplement mentions a standard S20 TL for it due to the need of transport, I think, of the 60mm mortar. But a few dozens of the Laffly S20TL PC were built for radio and command of the DLM's. They are a good alternative as they are quite distinctive, good looking and give some radio capability to our French miniatures. I don't know anyone who produces the PC version so I decided to convert a few of them. I also think that anyone who has the EWM, SHQ or MadBob standard versions can also use the next photos as a guide for their own conversions. 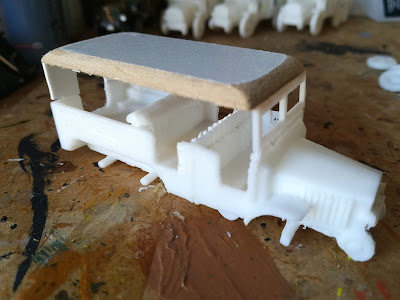 The PC version started with a careful measurement of the new roof made in wood which has to be carefully bevelled to this aproximate shape. 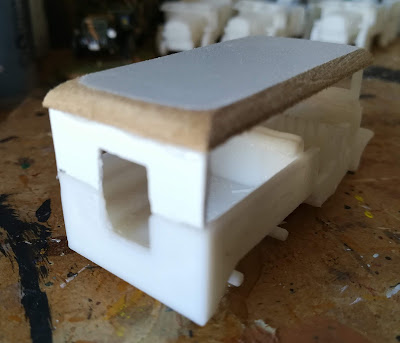 Using the front widscreen as a guide the back support of the roof is made out from plastic card. 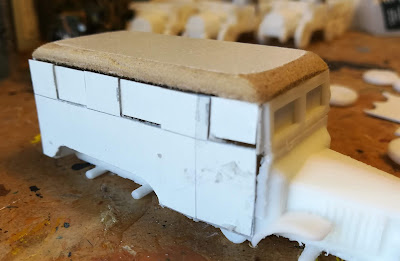 Then comes the trickiest part. You need new sides for the truck. I built two in plastic card, one right and another left side, and used them as matrix for the other trucks. A long strip of plastic card for the windows are previously glued to the inside and you are almost done with the main body. 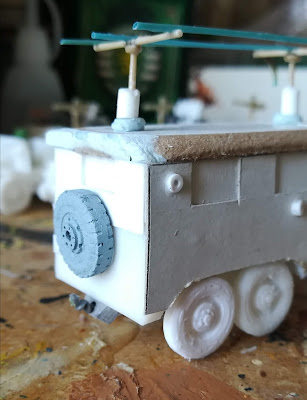 An extra Wheel is glued to the back. Around this point I noticed I bevelled the rear part of the roof and two component paste was used to remedy the situation. 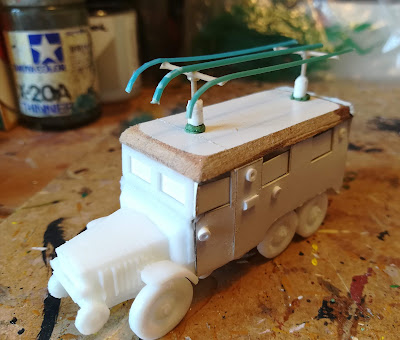 Lastly the antenna set. Some lines are carved into small pieces of EverGreen tubing to look like the copper bases of French vehicle radios. These pieces sat into blobs of GreenStuff and a T part is made of thinner tubing. The more striking part is the triple the antenna parts which are made of bended broom bristles. I looked for my old surplus Matchbox Sdkfz 231 antennae  and I couldn't find them. If you have  them in stock use them as they are a good alternative after a few cuts. 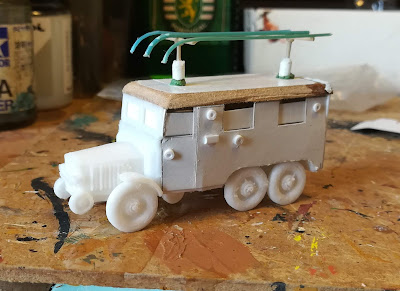 To complete the PC version I glued some sliced tubing to represent handlers and exterior radio parts. 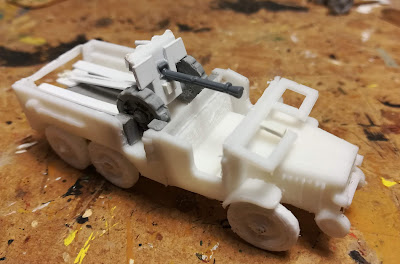 Two other conversions are the 25mm portee version. First you need rebuild to shape a new windshield with a space for the gun to pop out. Then you have to break the middle divisor in the troop compartment for the gun to seat. Then comes a full scratch built Hotchkiss 25mm AT gun as the ones I have in stock simply don't fit. Mine were made from Plastic card and the gun tube from extra 20mm Minairons PzI's. The wheels are MiniGeneral 3d prints. There also some ammo boxes under and to the sides of the gun. 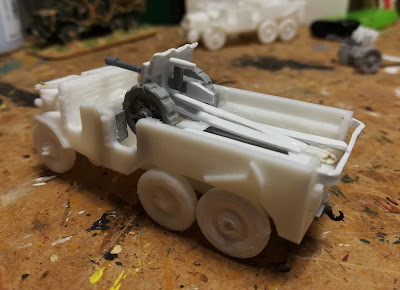 You also need a tow and some ramps. Frankly I already had a nice SHQ model of the Laffly 25mm portee and I copied most of the parts.

Next: this lot already painted and with a few additions.
Posted by João Pedro Peixoto at 06:40