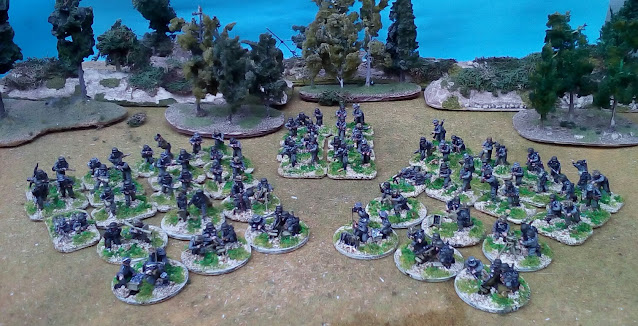 The personnel of the two battalions of the 901st Panzergrenadier regiment, plus two companies of the Aufklärungs battalion of the Panzer Lehr, gathers at the Forêt de Jean-Pierre Papin (don`t remember if I said this one or not...) to be briefed by Generalleutnant Fritz- Bayerlein himself.

In my Mortain series I placed FJ soldiers together with the Panzer Lehr vehicles. This was true as Panzer Lehr was under II FJ corps control by August 1944 but the true reason for no grenadiers with Pz Lehr was simply because I was out of Grenadier battalions  having spent all my 12 1944 German infantry battalions, both Heer and SS, with other divisons (even so not the 16 necessary to play Op. Luttich from the German side).

Panzer Lehr Division is a very visually distinctive unit in Normandy: all four Panzergrenadier battalions rode in Sdkfz 251 half-tracks and the number of tanks was also very high and even included three Tiger I and five Tiger II in the Funklenk unit (even if the Kingtigers were of the first design and left behind at Chateudun, close to Orleans due to malfunction). Another point of interest of Panzer Lehr was the uniform of the Panzergrenadiers which sported the same jacket as the Assault Gun battalion crews and this is the main reason for this post. 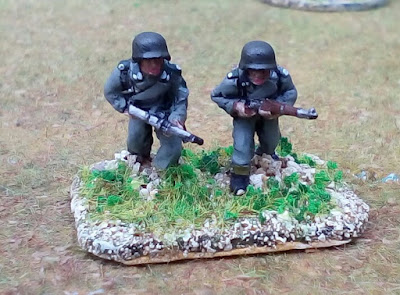 The figures are all Simon Soldiers and really beautiful they are. The detail is first class and you have a lot of different poses to man all sort of weapons in a Lehr Panzergrenadier unit. At first I looked to the Valiant Normandy Germans but only 2/3 poses can really be Lehr Grenadiers so I turned to Simon´s Soldiers from Australia. 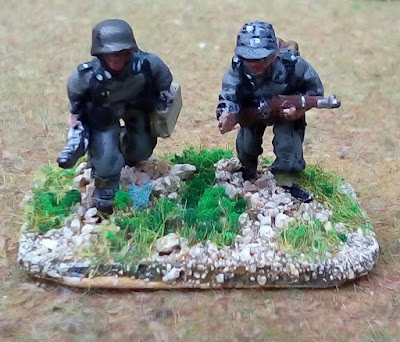 The detail encouraged me to paint even the smaller details of the uniform. But that is an easy task as the detail is crisp and easy on the brush. 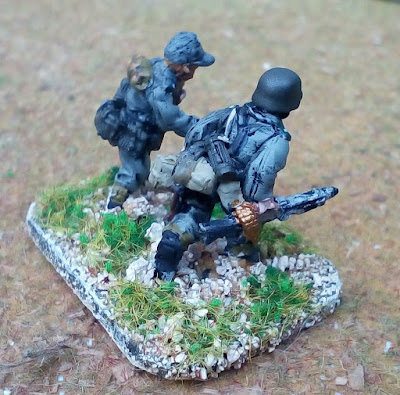 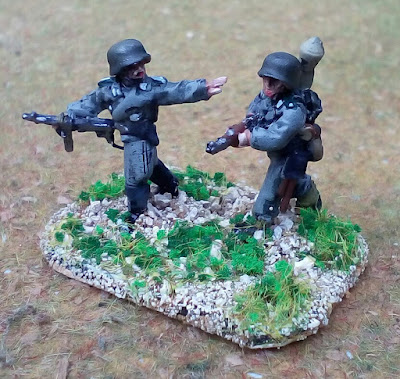 Two figures from the Aufklärungs Abt. with an elegant officer and a figure with a PSC Panzerfaust on its back. 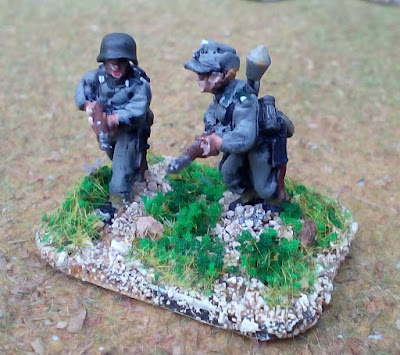 More figures for the Aufklärungs Abt. with the same solution for extra Panzerfaust. 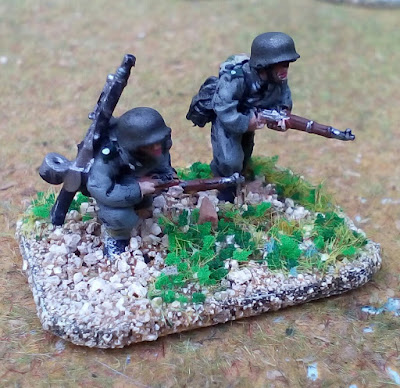 Due to some bad maths I ordered too many figures with rifles (hence the Aufklärungs figures) and too little with LMG´s and Panzerfausts so some also got a MG42 from the PSC stowage set. This one was placed on the back of  two of them in Rambo style. 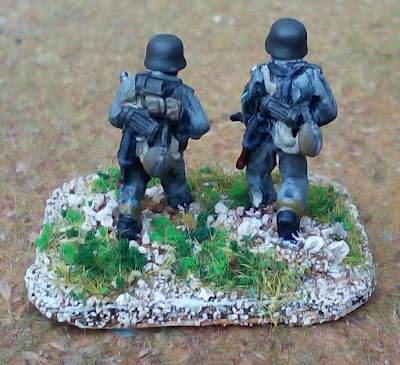 The individual stowage of each figure is nicely and realistic built. 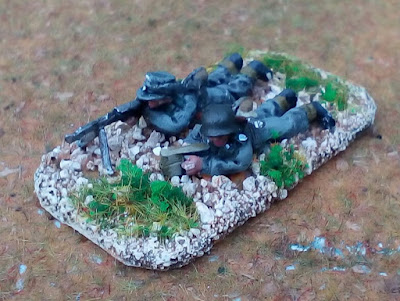 Another pose provided for the MG42. 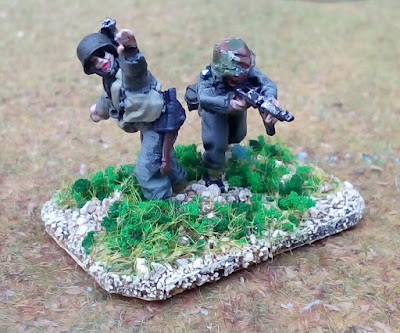 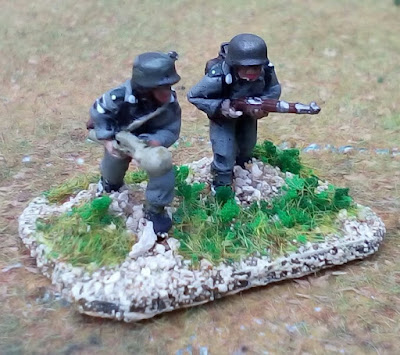 One of the two types of Panzerfaust figures. 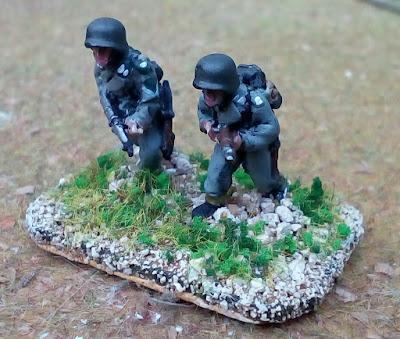 This time I even placed the chevrons of the Unteroffizier is the figures with the MP40. 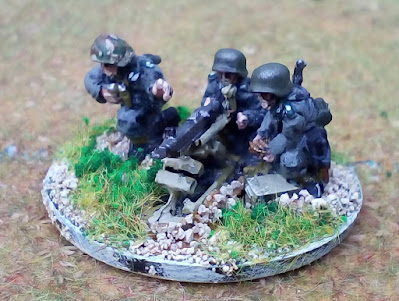 The MMG group. Four of them are necessary for the two RF! battalions... 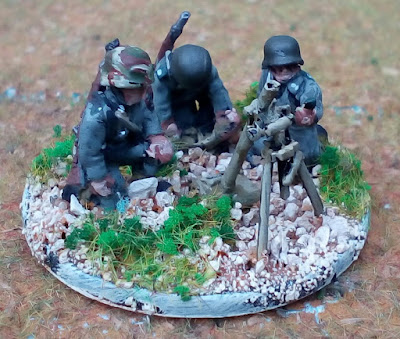 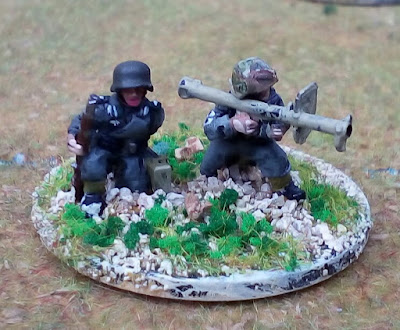 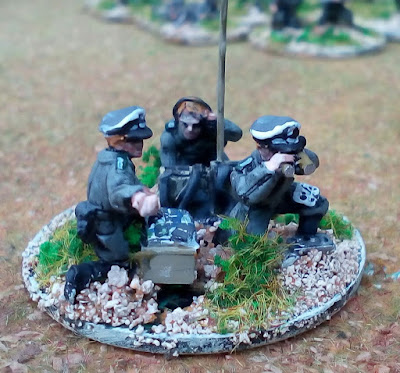 Battalion HQ stand. Plenty of action and details in a small 4cm diameter base. Here the plastic antennas were drilled into the metal of the radios. 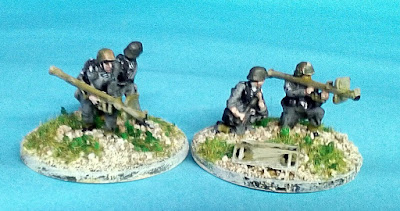 While looking for information on the Panzer Lehr I read that each of the Sdkfz 251 carried a Panzerschreck. With the order to Australia already on and Simon Ford speadily sending the parcel it was too late to order two extra Pzschreck and so I converted these four figures from PSC by cutting the M42 jacket in the waist area and adding some lapels with GreenStuff in two of the figures. Like this there are two of these stands in each battalion instead of one as Masters Colin and Richard say in the Normandy Battlegroups. Not sure if my option is correct but if the story of one Pzschreck per Half-track is true, even two will not be enough. In fact many places indicate an unusual  high number of AT portable weapons provided to the Lehr grenadiers.
Next: more Germans for OMG or the Tigers for Panzer Lehr.
Posted by João Pedro Peixoto at 13:19