With this post I'll start to show you my 1944 US Armored Division. In fact the idea is to have enough units to represent any of the big types of US units in the Western front, the Light Tank Division, the Heavy Tank Division and even the Infantry Division from the Normandy landings up to Germany 1945. Then I also wanted to be able to compose several of the usual Regimental Combat Teams (around infantry units) or the Armored Combat Command (around tank units). So no specific unit in mind when building US units but the aim is to gather enough units to be able to represent any of them. 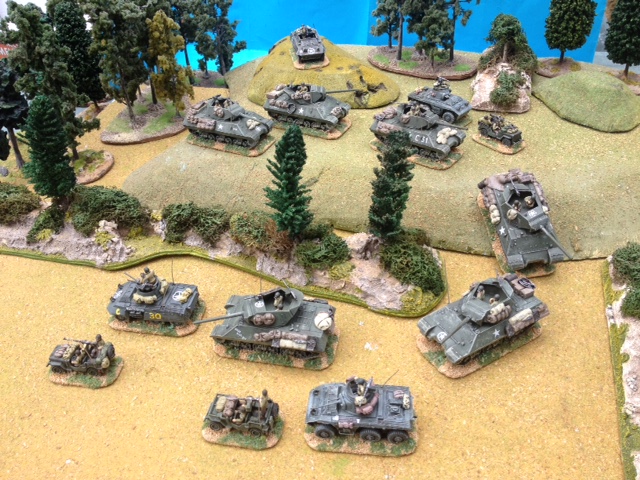 Somewhere in Normandy a M10 Wolverine Tank Destroyer Battalion leaves the protection of the woods and advances to meet the enemy.


I made the battalion with three companies each of two M10 and one M8 Greyhound and one MG armed Jeep. The command of the battalion only has an M20. This organization presents problems as the total number of M10 was 36 per battalion (12 per company) so the number of models in the battalion should be 7-8 instead of 6. The problem is obviously to divide 7-8 by three companies...to cope with this and to compensate the lack of punch I placed one M8 Greyhound with its 'Tiger destroyer' puny 37mm gun in each company when in reality there were only two per company. 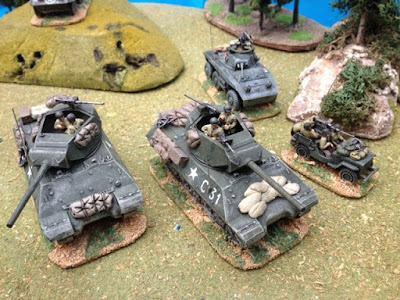 The models are Armourfast for the M10, Italeri for the M8 and Hasegawa and Airfix for the Jeeps. 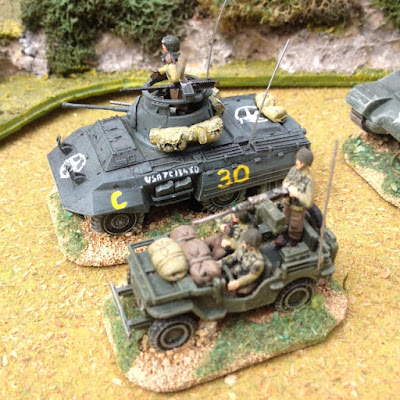 The crews of the M10 are Irregular Miniatures; the M8 have Skytrex and Hasegawa crew and the Jeep's crew are also Hasegawa with Airfix drivers. 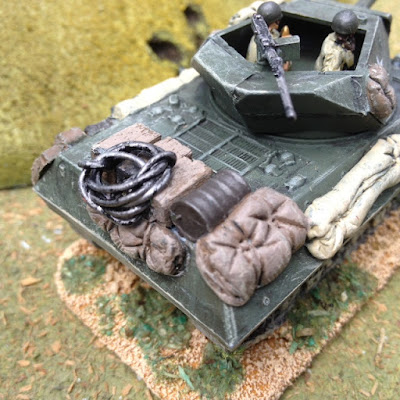 The M10 of Armourfast is an accurate but simple model. So place plenty of stowage, antennae, crew and don't forget the ammo box for the 12,7mm 50 cal Browning MG. Eventualy I fitted some of them with a smaller 7,62mm 30 cal Browning. Lastly the command M20 Scout Car from Altaya with IM crew.
Next: the first Armored Battalion.
Posted by João Pedro Peixoto at 07:06