Anglo-Zulu War 1879 in 20mm - The British army at Isandlwana

When you field in a 1/20  ratio the British at Isandlwana you understand why they didn't have much of a chance against the Zulu army. Using the 1/20 ratio the British have around 90 figures against close to 1000. But then the old question of how could a force of 170 men against 4.000 being victorious at Rorke's Drift and another force of 1.800, with some artillery,  against 15.000 (a better ratio for the defenders) could not win Isandlwana. Of course the answer is somewhere around the poor defensive plans of Column No 3 under Chelmsford's supervision and the orders he gave to Pullaine to follow him which apparently originated an organised but relaxed defence based on a dispersed camp ignoring the need for a Laager. The contempt regarding Zulu military qualities that Chelmsford showed, based on his experience fighting the much weaker Matabeles, would cost the British dearly. 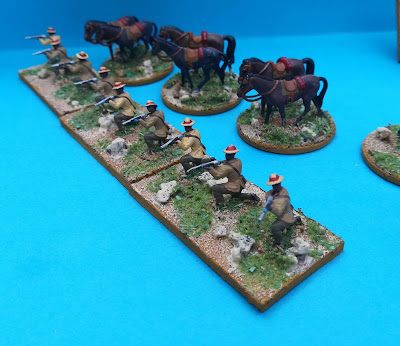 The Natal Native Horse (NNH) under Durnford's didn't belong to Pullaine's column but ended up in Isandlwana being one of the few units who managed to retrieve many of its soldiers and even save several soldiers of the British army.
The figures are Union Esci soldiers with Confederates hats and shortened rifles. As I only used one pose I painted the coats in different shades of brown for the sake of diversity. 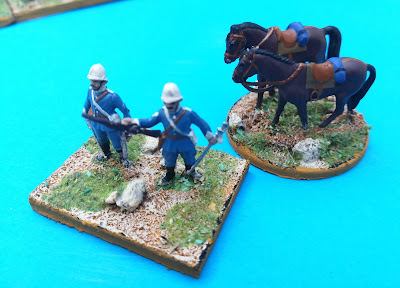 The Natal Carabineers stand for the several units of Natal volunteers present at Isandlwana. I chose them because of their striking blue uniforms.
The figures are ESCI British Colonial just painted differently with added rifles.

The Native Natal Contingent (NNC) were British auxiliaries drafted from the Basuto and Mponso  armed much like their Zulu foes with a few rifles distributed among them.
With one rifle for each ten they naturally wavered under the Zulu onslaught and that is why I chose some figures from the North American Indians set of Revell with a nervous attitude. They suffered plenty of alterations including plastic card shields. The NCO's are again Esci ACW figures with a few changes. Only 2/3 in each base have a rifle. 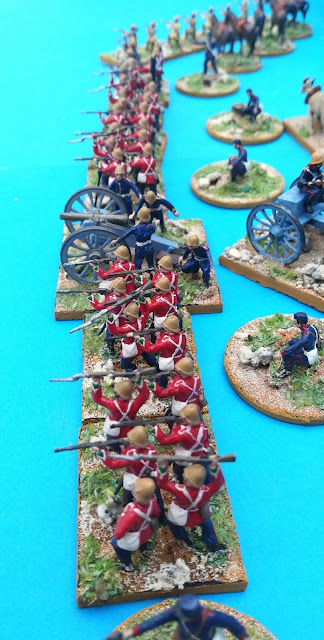 The six companies of the 24th Regiment of Foot. All are Esci figures with no conversions. 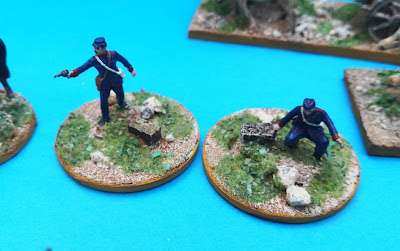 The Quartermasters are hurriedly distributing ammunition or defending themselves.  Also Esci figures some from the French Foreign Legion set (left) and others from the normal Esci British Colonial set. I glued a bit of sawdust on the top of the ammo boxes to simulate bullets and aplied brass paint on them.

The 7 pdr mountain gun. The gun is a Esci model from the British artillery set with a new barrel and a few cuts here and there. The figures are various plastics  with colonial helmets. The limber is built in Evergreen plastic card. The horses come from several origins and in some the extra towing harness was made in two component paste. 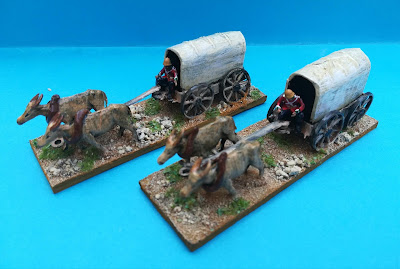 The civilian carts are some old chinese copies of I don't know what  and they came along some indian and cowboys sets. The animals are some wild game in metal from Skytrex. The drivers are the Esci Quartermasters with new heads and repositioned legs. 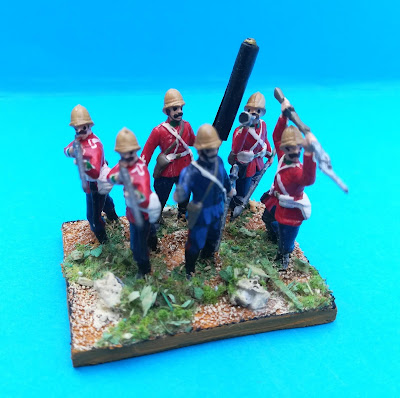 The flag of the 24th was encased more or less like this one and may not have been unfurled as many paintings of the battle show. 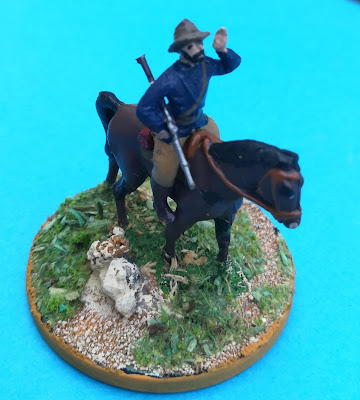 This Boer figure symbolises the several individuals or small units that acompanied the British army in this campaign. It was made from the relatively useless hard plastic figure that comes along the Hasegawa M-3 Honey light tank with an Australian head from Airfix and rifle.
Next: no promises has I have a new model at home with six days that will keep me busy for the next few years. Of course all will depend on the colours aplied on the diaper.
Posted by João Pedro Peixoto at 11:36