In my first years of Modern wargaming I was around the Lebanon Campaign of 1982. For that I built a Syrian and an Israeli armies in 15/18mm, the scales on those days were you could find almost  everything you needed. Then in the 90's I started my Iraqi and Coalition armies in 20mm as the models for this period were already more abundant. Recently with my 'Russian Contemporary Wars' I explored the Chechen and Georgian conflicts again in 20mm as there is already a big flood of models for them. Even more recently I found Fb groups like Red Storm Rising Wargaming,  Iraqi Armed Forces research group and Tanks at Work, just to name a few,  were their main contributors place very nice articles on armoured warfare around the World.

Then the huge numbers of Altaya and Fabbri diecast models available- tanks, planes and helicopters -  made me think about creating European armies that on an hypothetical basis could wargame with my existing Russian, Iraqi, Saudi and US 20mm armies.

These already built Altaya and Fabbri models allows you to build a French army (all sort of planes and helicopters are available, as well as the AMX-30 and Leclerc tanks, GCT 155mm and VAB APC); an Italian army (with a big obvious collection of planes and helicopters, don't forget that Fabbri is Italian and Altaya also has some of its roots there, Centauro and C1 Ariete MBT), a Swedish army (Saab aircraft and S-tanks ) and also almost everything you need for a modern German army. For all these armies the missing models or figures will be made out of plastic brands and 3D prints. Due to already having plenty of models built around the 2008 Georgian conflict I will concentrate around this year for all these projects. The cherry on top of the cake will be obviously the mighty Portuguese army!

It looks like a too ambitious  project but as you will see most of the models are already built and many will not be even repainted but only some details added.

While the world is watching the Olympics of Beijing the Georgian army invades South Ossetia and Abkhazia bringing  Russia to the conflict. The Georgian invasion is smashed by  the swift Russian intervention of its 58th army already blooded in the two previous conflicts in Chechnya. Until now everything is true, from now on everything comes out of my devious mind. Fearful that Russian could go too deep inside Georgia, NATO moves its forces deeper into Poland while the US forces are mainly still engaged in Iraq and Afghanistan. Russia moves its forces closer to its own borders, spy aircraft are shot down from both sides and war(gaming) begins. 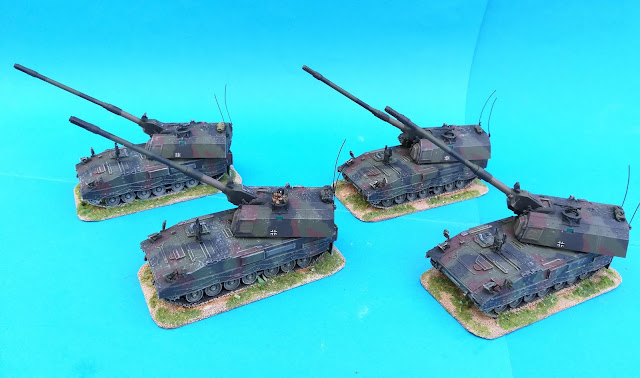 Number two in the Portuguese Altaya collection was this PzHaubitze 2000. Still very cheap at around 3€, before number three starts to 'hurt' I bought these four models really not thinking about using them for much. They were just big and cute. I even bought once the Revell model and then I gave it to someone. Now I wish I had bought a few more...

I only placed a pair of antennae, some stowage and crew. I also apllied a careful drybrush of sand colour all over and the usual basing. 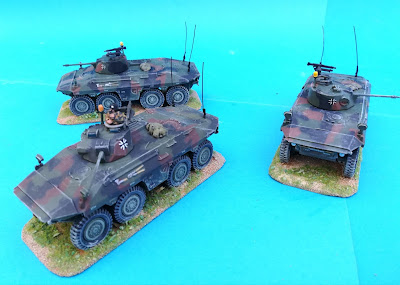 The Luchs are a mix of Altaya and Fabbri, the Fabbri version generally being a little less careful in the painting (as well as in the boxing). Same details like the ones on  the SPG's were added. The crew member is a PSC British from their A9 tank set. 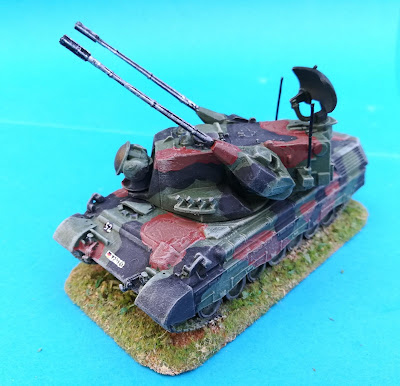 The Gepard is the Altaya version and was repainted to the CARC camouflage of NATO.

Next: Probably more Germans.
Posted by João Pedro Peixoto at 06:39