The Matchbox Sherman Firefly is a fine old kit which, with a little work, can be turned into a 75mm gun Sherman V. The main characteristic of this model was the alongated hull which also made a wider space between sprockets.

This is a particularly important version of the Sherman as it was mostly delivered to the British and a usual sight in Normandy 44. 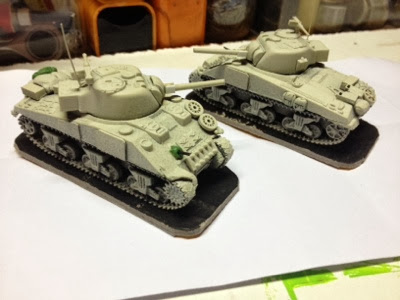 The changes are:
- cut the 17 pdr barrel (25mm at the final);
- place two small Evergreen barrel support/protections at the beginning and sides of the barrel;
- cut the two sides of the gun mantlet and keep only the central one; 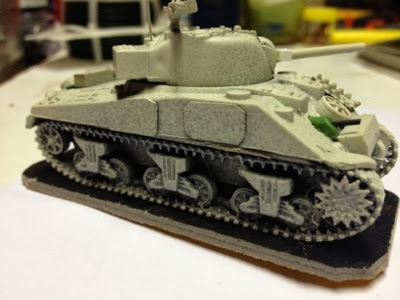 - cut the side hull protections. This part is quite tricky: pass the X-acto blade between the main hull and all along the side protection several times until you can withdraw the side protection with your fingers. Do this as many times as possible. Don't do it with a pair of scissors as you will probably break more plastic than you want;
- apply three ammo plate protections to the sides of the main hull - two on the right and one on the left side. I used my trusty Evergreen for the plates and for many other details ( in fact the only styrene available in Coimbra...).
- make a mantlet out of GreenStuff for the hull MG;
- place a 12,5mm Browning MG on the turret;
- scatter as many stowage as you can all over the back and side areas. Change the barrel cleaning kit to the  front hull on some of your Sherman as the real ones used to. 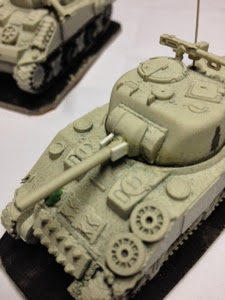 The final result makes a very different model comparing with the original kit.

This is also a cheap and enjoying way for you to have the longer Sherman V in plastic.

Posted by João Pedro Peixoto at 11:24