One of the  first sources of figures for this Mohács project is a huge stash of Esci Muzlims I found some 10 years ago in a supermarket (???) in Covilhã, a city close to the Spanish border.

There were 15 such boxes, all the same, and at an irresistible 1€ each as I told in the previous post. So I bought them all with that typical eagerness of the pre-crisis era, thinking as usual that one day they could be useful for Alcácer Quibir or to fight the French Foreign Legion or ... whatever.

Well, we just don't need too many coherent reasons to justify our hobby, do we? 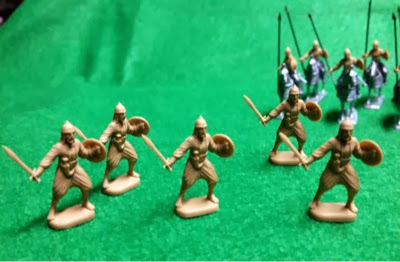 So here it goes he first use of the Esci Muzlim box. After comparing the figures to the ones I could use for Mohács 1526 there is only one figure (better, its torso) and some heads that can be used. What  could I expect if the box was designed for XIX century North Africa?

Worse: there are only 3 such figures per box. But at 15 boxes it makes 45 figures, plus some 21 more from some 7 other boxes previously bought.

So here you can see what use I gave them:  they turned into armoured mounted Sipahis. 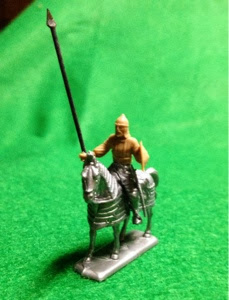 These figures were cut by the waist as well as some Italeri Mongols and Saracens who provided legs and horses.

The bond was achieved with cyanocrilate for soft plastics.

The scimitar was cut off and replaced with a lance made from the bristle of a plastic broom.

The arms of some were heated with a lighter and placed in different positions for the sake of variety. 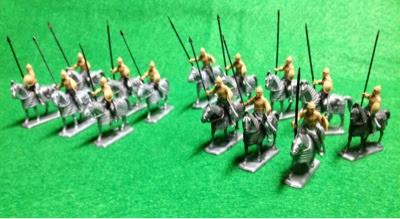 Ottoman army is gathering around his sancak (flag- for you not versed in Turkish, he he ...).

Posted by João Pedro Peixoto at 11:33