Finally I found a way to paint the Revell Prussian Grenadiers of the 7YW!

I bought some 50 boxes for this period some 20 years ago in a very strange Hindu shop that once emerged  in Coimbra's downtown close to the train station. I remember entering that place hoping to find just some resin cheap houses of those days but right in the middle of the big shop was a stand of hundreds of Revell 1/72nd plastic soldiers. Up until now no big deal if it wasn't for the fact that each box was less then 1 Euro in those days currency, while in normal toy shops their cost was by then three or four  times more. In the next few days I piled up in my basement - without a clear knowledge of the rest of the family, of course -  many dozen boxes from all periods Revell was producing by then.

Then that Hindu shop I was hoping to get old with closed down and a damn supermarket or something like that took over. Well, if the prices they applyed to Revell were the same for the rest of the stock it's not surprising!

With Brandywine OB definitly in my mind, I started my first Hessians. I still remember George Washington mini series of the 80ies and a very well portrayed Hessian attack on the patriot redoubts. If you also miss it here you have the full series: 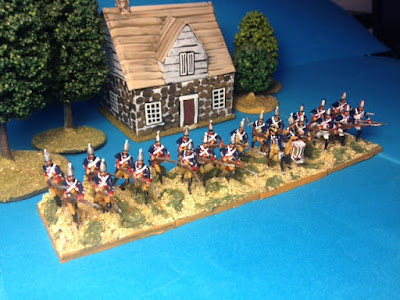 This is the Linsing Grenadier battalion made out of four detached grenadier companies in that very British and questionable tradition. 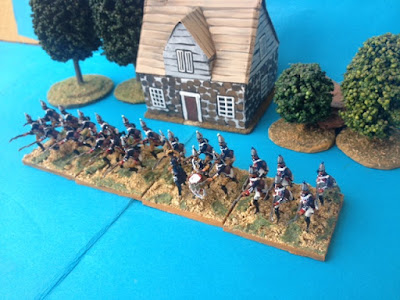 This battalion carried no flags but with those stylish Mitre caps who needs them? 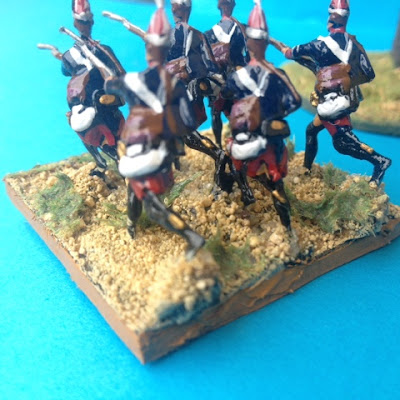 As all three poses Revell offers with Grenadiers are in charging, most of them are grabbed to the base only by one foot. To solve that I used electric glue between the foot in the air and the stand before priming. Then, sand and static grass hides the mole hole that results from this. 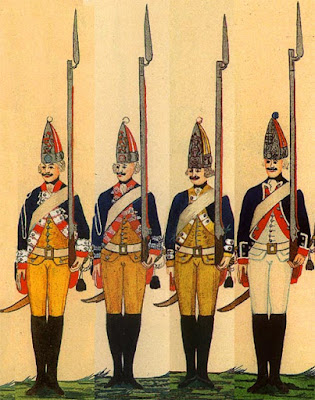 This is a very good source for all those who want to paint proper Hessians. Go to

and you will find a wealth of information with this kind of plates made mostly on the Hessians return to Hesse-Cassel in 1783.

Posted by João Pedro Peixoto at 12:54