In the last few weeks I've been secretly building my SCW armies, a little bit like the Nationalists prepared their coup against the Republic (as a Republican by hart these last ones are my favourits). The problem of a new period is the amount of reading you need and your own misconceptions you have to rebuild regarding  that period.

The reading issue was, as usual, solved by my friend JMM who sent me the usual pile of books inside a Pendrive. The misconceptions issue is still being solved -  with the help of the books of course: until then I was thinking the SCW was a struggle between Republican militia and professional Nationalists; that there was no big battles at corps level, uniforms were, well, not mandatory and many other silly ideas of mine.

In SCW wargaming and modelling you can find a never ending number of very interesting units from Carlists to International brigades; Italians and Republican regulars; Moors and Guardia Civil. The Spanish literature on uniforms, aircraft and vehicles is very good and lately the magazine Desperta Ferro has dedicated entire volumes to the Spanish Civil War. Of course Osprey and many other editors in english language also have very good reading material.

Frankly, the SCW craze is not new for me. A few years ago I already built a few airplanes in plastic that I will show you soon. Recently I kept making some new planes and also ordered some Minairons, Pegasus and Panzer Garage vehicles for the SCW while making the Blitzkrieg models. With the arrival of  two of those big packs of Irregular Miniatures infantry each with 100 models things got more serious and now I can say, NO PASARAN! 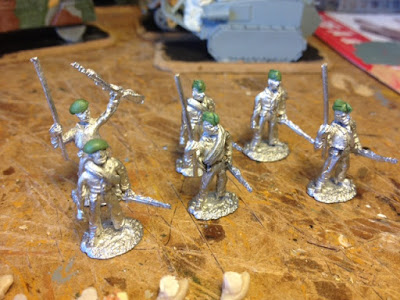 Some of the Republicans of Irregular Miniatures are intended for Militia and have no headdress so I made Isabelino caps and berets for them out of GreenStuff so they can join the Exercito Popular Español. The arms were also placed in a more casual position just by twisting the nice metal in which IM figures is made of. 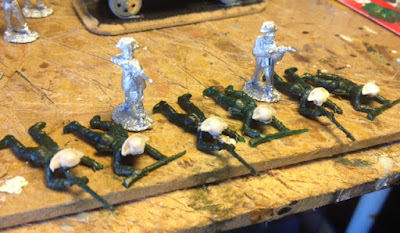 The Irregular Miniatures  Guardia Civiles have no support weapons and I think they are right as I've never seen any picture or  description saying they had them, excepuating a sole HMG per Battalion.
But, just in case and to make the Guardia Civil more autonomous, I added to the German ESCI Mg's the head of laying down George Washington's Airfix heads. Now these unfortunately famous security force can have some support. 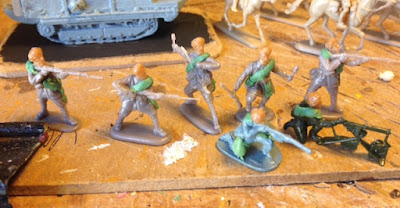 I'm also converting Moors as the Nationalist pack of IM brings only a dozen of these fearful warriors. For that I needed the baggiest trousers possible with a torso from the decade of 10 or 20. The Revell WWI Germans were the chosen ones with heads from the ESCI Muzlims. The backpack was taken out and replaced with a blanket and a sash. 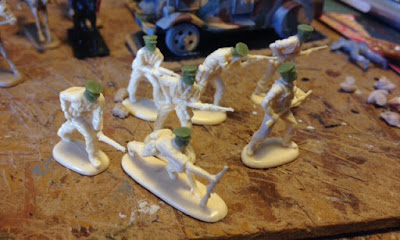 Also only two dozen Guardia de Asalto in the Republican pack of IM. So a few more were built from the body of Revell US Marines and heads from the Airfix WWI British set. 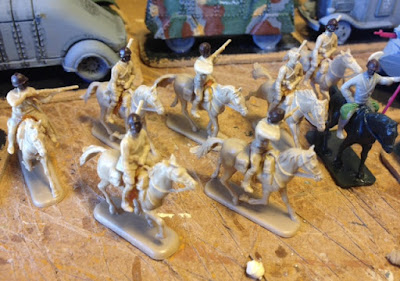 This Republican Cavalry squadron is made out of the bodies of Revell Soviet Cossacks with ESCI WWII French heads. The Hasegawa cavalryman that goes along with the M-3 Stuart gave a nice guidon bearer. 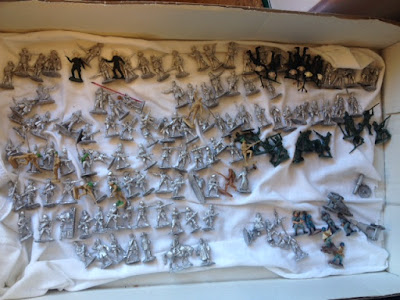 The Nationalist IM pack along some conversions and also BUM Legionarios. 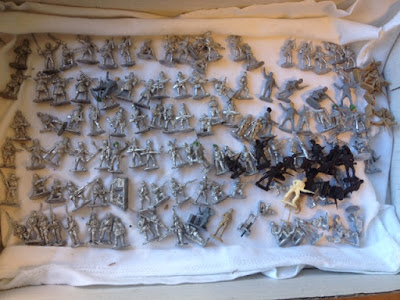 The Republicans were also joined by some conversions and packless WWII French and Russians  from ESCI.

Next: planes and tanks.

Posted by João Pedro Peixoto at 08:13