On the way to Bagdad a US Abrams tank battalion awaits for refuelling in the banks of the Euphrates.

The Abrams MBT showed up  again in the Gulf in its newer M1A2 version during operation Iraqi Freedom, the invasion of Iraq in 2003. The 120mm gun was now standard and a number of panels were trying to avoid the deadly friendly fire which caused most of the casualties in 1990-91. Also an improved  fire control system and the System Enhancement Package (SEP) could be seen.

Another striking characteristic of US armoured units we could see from the TV was the mixture of different camouflage schemes, from the full desert tan to the european schemes. In fact the fight was now much up north in Iraqi cities and lakes and its greener surroundings so the mixture worked quite well. 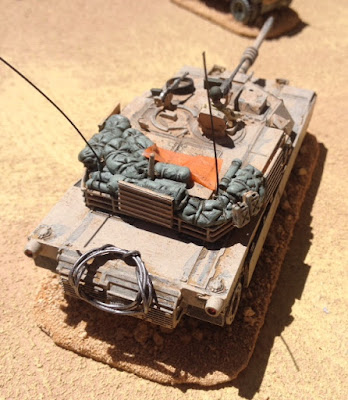 In spite of being a formidable weapon that had no match in Saddam's tank fleet the Abrams showed its weeknesses in the Iraqi campaign, some particular to all tanks: its vulnerability to rear RPG attacks, the lack of a rear telephone for infantry to communicate with the tank's crew and the impossibility of infantry to be transported on its top or even walking in its rear due to the heat from the gas turbine. This last characteristic is even making the designers to think about a petrol engine in order to prolong the Abrams life. In spite of being one of the best tanks in the world, the Abrams entered the US army in 1980 and thus is almost a middle age guy with 40 years old, and you know that at 40 you cant expect to do the same stuff when you were 20... right?

Another problem of the Abrams is that helped to create the chaos of that region, with never ending civil war, Islamic State,  refugees, and so on.

But that can't be Abram's tanks fault but that fault is more on the US petrol thirsty politicians. 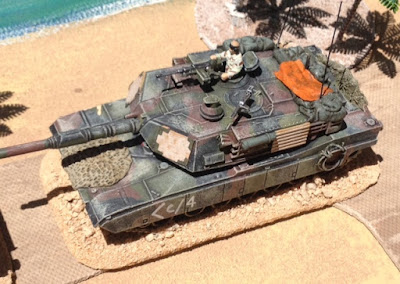 This M1A2 model is from Hasegawa. It already carries the CITV sight assembly (in front of the 7,62mm Mg). I only placed the thermal identification panels in front, back and sides (these ones called 'Venetian Blind' type), cammo net and the usual stowage in plenty. The camouflage is the NATO type of green, brown and black. 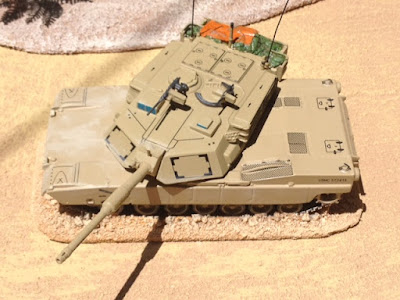 This Abrams is the Altaya Die-cast model. Only a little light sand drybrush, antennae and stowage and its done. 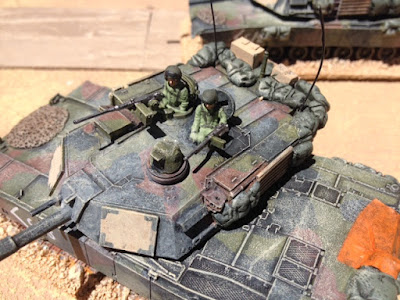 The Esci Abrams is the older M1 version so plenty of work had to be done: crew converted from fighter pilots jets, panels, CITV, stowage and such all had to be scratch built. This happened to almost half of the thirteen tanks of this battalion. Some even have the thinner 105mm gun barrel which I hope no one notices in the middle of the other details. Politics, my friends... 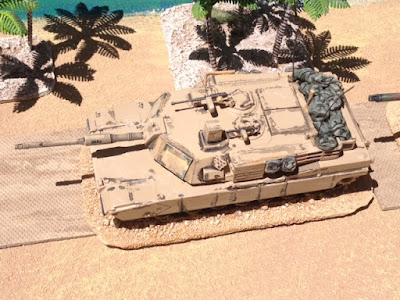 The Die-cast  Eaglemoss Abrams, distributed in Portugal by Fabbri, also had the CITV, panels and stowage added. The weathering was rougher on this one making it look more veteran. 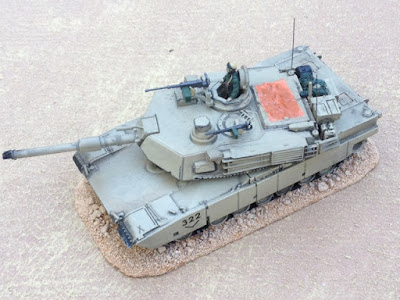 The Forces Of Valor Abrams has everything necessary for the 2003 campaign. I only drybrushed some light sand to go along the basing and added the orange panel. 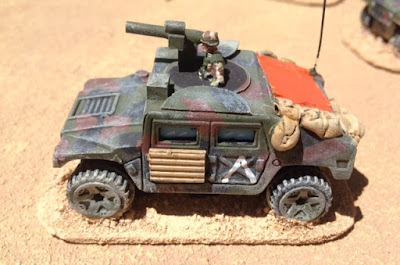 The TOW-1 Humvee are Chinese Die-cast. The TOW, top doors and the Fire Control System (the box in the front left) is scratchbuilt in Evergreen and the soldier is an ESCI torso. On the back, you can see the usual stowage, orange aerial panel and antennae. 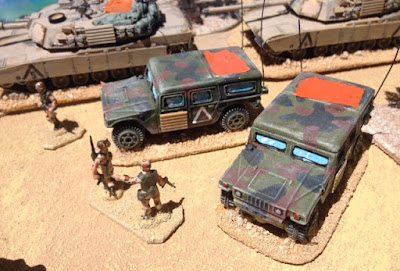 Other Chinese Die-cast for command and liaison again in NATO colours. 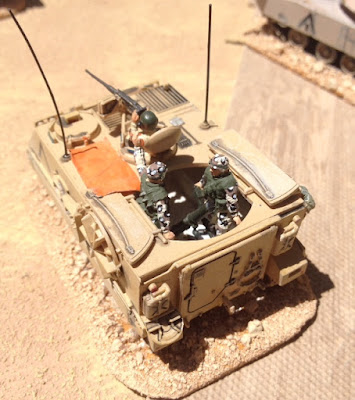 The M-113's with the M 106 mortar is here until I find the newer M1064 model. Meanwhile it can be used in Operation Desert Storm. The crew is Preiser and Revell.

Saddam's airforce dream... may be if he had not buried many of its aircraft under tons of sand.

Posted by João Pedro Peixoto at 15:33