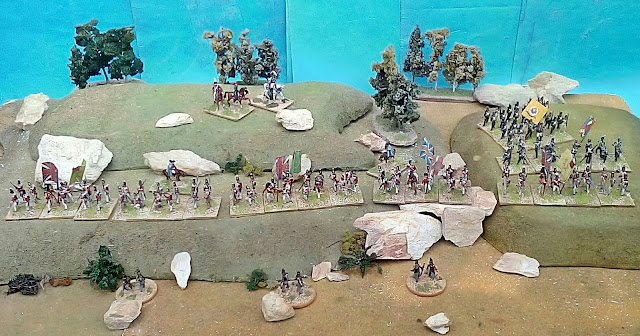 Picton's Division awaits the French assault coming from Pendurada. The environment is the area of the "ledge of rocks" in Chandler's book. In this place some of the most dramatic events of the battle occured and the Portuguese infantry  finally earned Wellesley respect with one of the most famous charges downhill of the entire Peninsular campaign. 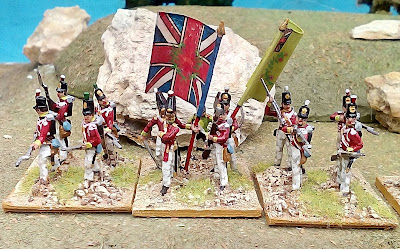 Starting with Lightburne's Brigade and left to right you have the the 5th foot. The figures are mostly Revell Esci minis with Stovepipe shakoes and Hat Belgians painted as British Peninsular as they nicely suit them. 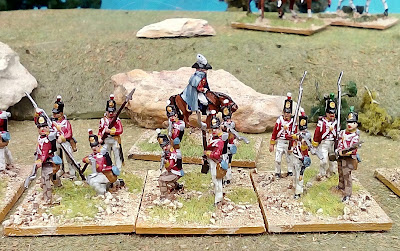 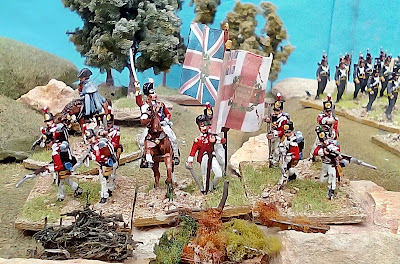 Mackinnon's Brigade starts with the 74th foot. This was an Highland Regiment but only the officers dressed typical Highland uniforms. The figures are mostly Hat British with an Italeri standard bearer and a Waterloo1815 officer on horse.

The 45th foot with a mix of brands and some Revell and Esci figures with Stovepipes made out of EverGreen tubing. This can be easily done with 2,4 mm tubing and a tuft from GreenStuff.

The famous 88th foot with the brands above indicated and more EverGreen tubing for some of the shakoes. 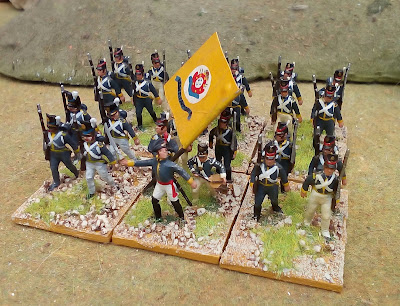 Campalimaud's Portuguese Brigade starts with the Infantaria 9. The figures are Esci and Italeri French bodies with British Belgian shakoes. The 1812 French uniform particularly suits the Portuguese because of the tight boots both armies used. In the long gone days of this making there was still no internet and this flag is hand painted. 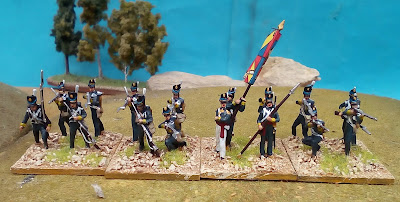 The other Regiment of Champalimaud's Brigade is the Infantaria 21 composed of Hat Belgian infantry and Revell's. 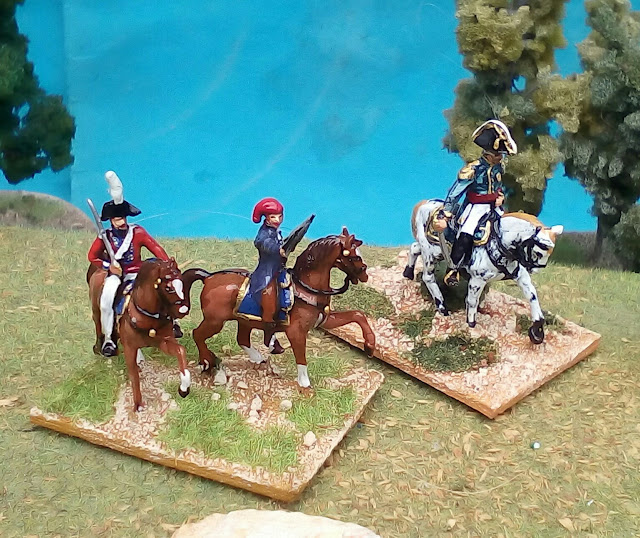 General Picton is the Waterloo1815 figure without the tall hat and with a blob of GreenStuff instead to simulate the red nightcap he apparently used during the battle. On the same stand I opted for a trooper of the 4th Dragoons as its bodyguard (figure is a Waterloo1815 with a Hat bicorne). In the other stand is Brigadier José Joaquim Champalimaud, a figure from the box of the Italeri Austrian/Russian Staff.

Next: more Blitzkrieg or more Bussaco depending on Santa's whishes.
Posted by João Pedro Peixoto at 07:22