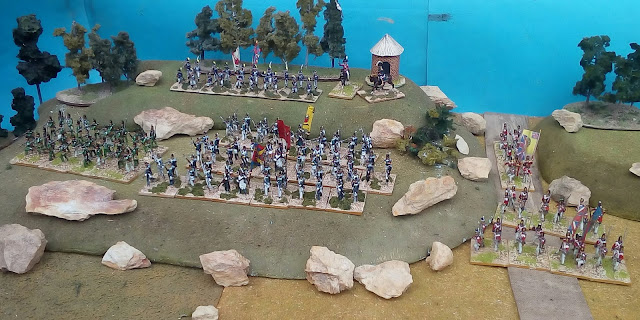 Leith's Division approaches its area around the Santo António pass. To the right the Loyal Lusitanian Legion (LLL) starts its move to the far end of the line close to river Mondego and Penacova, in the center stands Spry's Portuguese Brigade and finally Lt.-Col. Barne's Brigade. The Division was engaged in driving back Reynier's II Corps. Barne's Brigade is made of the 1st, 38th and 9th foot Regiments. The figures are some of the usual Belgian Hat and Revell and Esci conversions with Stovepipes made of EverGreen plastic tubing. 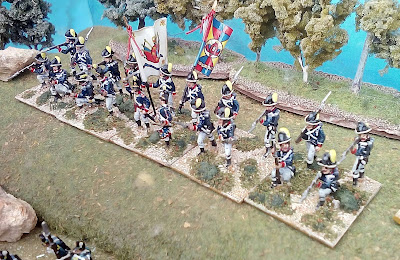 Here is the infamous Tomar Militia Regiment the only allied unit to have fled the battlefield with the first shots. This Militia regiment was attached to Spry's Brigade.

The bodies of the figures are Italeri Austrians (1st box), the ideal uniform for the Portuguese as our 1806 uniform was based on the Austrian 1798 uniform. The heads are completely different: I used ACW Confederate hats and a crest made of GreenStuff.

Like this they became quite close to the original you can see in this drawing by Bob Marrion in Charles Grant book 'Wellington in Defence 1810'. 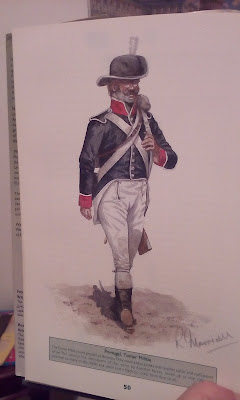 Here Charles Grant clearly mentions that the crest was also used by the Militia (in fact it was an official part of the uniform) and I opted by using it. 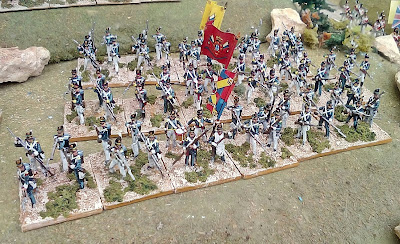 This is the rest of Spry's Brigade with 3rd, 8th and 15th Portuguese Line Regiments. The
models are Revell, Esci and Hat. 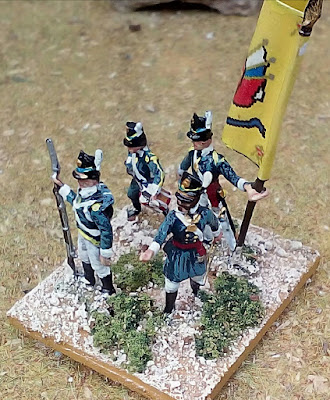 Once again some Italeri Austrians were used as Portuguese with heads from surplus Hat 'Red' boxes of British Peninsular infantry. On the back the old but trusty Esci figures. 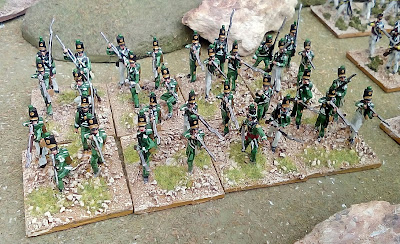 Now for the LLL. This large unit was made of Portuguese immigrants in England. The figures are Esci and Hat Belgians. The officer is a Revell figure from the riflemen box as this unit was in a fact Light Infantry.

Next: transport for the Schützen of the 7th PD in France 1940.
Posted by João Pedro Peixoto at 15:31