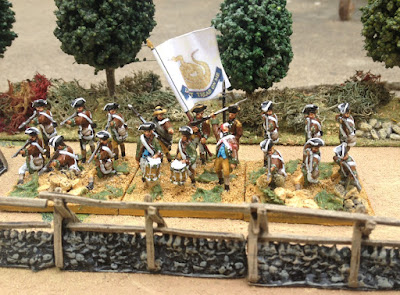 One more American Regiment for Brandywine. This time it's the 2nd Pennsylvania. The figures are the leftovers of the Italeri box I used for the 2nd Maryland. This box offers four different firing figures, two standing and two kneeling. The figure standing to the left had the hat flying from the head as if being shot or blown away by the wind. The hat was taken out, the head severed by the middle and the head cover glued in its proper place.

One of the kneeling figures has a big stone protecting the firer. I disguised that stone with many other around otherwise they would look a bit silly standing alone. 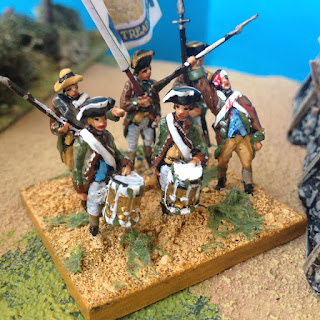 The figure to the right is probably a survivor of the 9/11 with a very nasty wound in the arm and another in the head. Probably it was designed with Yorktown in mind with rejubilant Americans knowing about Cornwallys surrender.

Once again Tarleton Quarter blog gave most of the information for painting these figures.

Posted by João Pedro Peixoto at 07:21