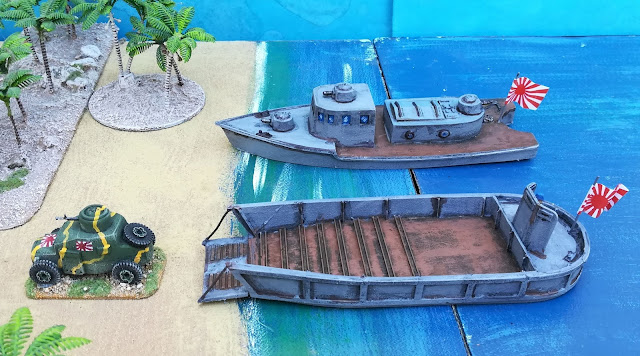 Before getting back to France 1940 you can see here a group of freshly built and painted Japanese landing craft arriving at a lost small island in the middle of the Pacific Ocean in search of boots... oh,no, sorry that is Gettysburg... in search of water. Just in case, they land a reconnaissance vehicle to see if there are any hostiles.
The landing craft are Hovels. The armed one is an Armored Boat AB-Tei / Type C Landing Craft and the other one is the more common Daihatsu Type A landing craft. The reconnaissance vehicle is a Sekigahara 1941 model from BUM with many changes. 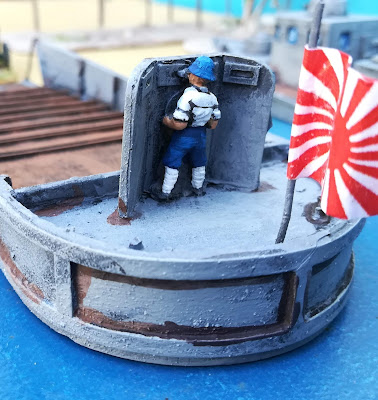 I painted the landing craft driver in navy colours even if he has puttees and probably should have been painted in army colours.
The flags are internet prints. 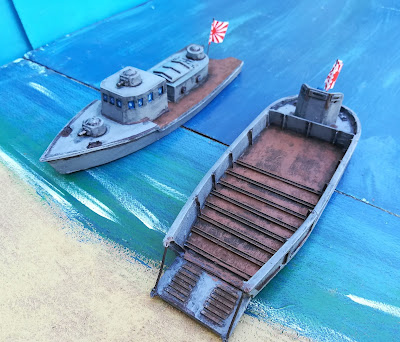 Both ship's decks were painted wood colour. Not sure about the extent of the wood (if any) on the armoured boat but it becomes more lively like this.
My idea for the future is to build several of my own Type A landing craft in wood and card board and I needed this one for measurements. 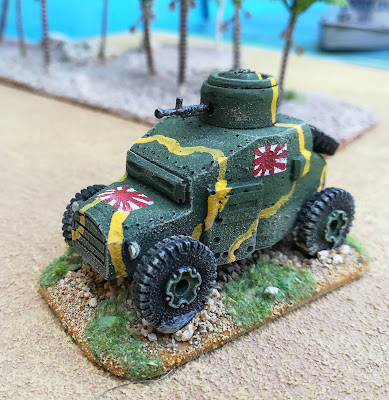 The vehicle is a Sekigahara 1941 model and an experimental vehicle built in very small numbers. Well, in fact its numbers were so small that only one was built and in 20mm thanks to my devious mind. So, sorry, this thing never existed.
This resin model came along a box of SCW figures in an old BUM box. Probably BUM was trying to pass the model as a Tiznao or a home-made armoured car of any sort. So I had to find a way for this model to survive. In fact this is a pity as BUM is a Spanish brand with very nice SCW figures but with these kind of very lousy vehicle models, specially their older ones. They should be more careful about presenting stuff from their own history. Besides this, the wheels that came with the model were more of the bycicle size and there was a nail offered for the gun!
I used some decent wheels and a DSKH Soviet Mg from the Matchbox T-34 instead, painted the inevitable yellow disruptive camouflage stripes and the navy flags and managed to have another Japanese vehicle... sort of.

Next: a return to France 1940, particularly the terrible month of June.

Posted by João Pedro Peixoto at 06:30