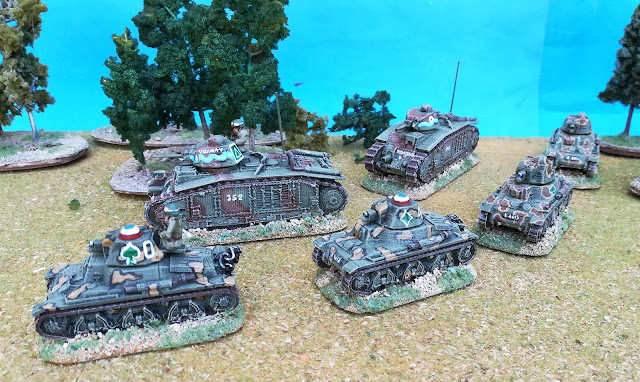 3e DCR and 3e DLM tanks meet at the top of Point de Rencontre hill in order to prepare for another counter attack against the invading Germans.
This is also an emotional post as in one stroke I finished the last two Char B1bis I needed from a total of 13 and also the four H-35 necessary for the two reconnaissance squadrons of the Dragoon regiment. I started the Char B1bis group many years ago with the Matchbox model and continued with the Altaya and Lancer models. These last two from MiniGeneral are the last ones I need for a RF! French DCR.
So no more of these in the future.Take a good  look at them dear follower as they are the last of its kind and you will never see them in your life time!... Well you can always go back on the pages of this fantastic blog and review this and other Char B1bis posts again!! 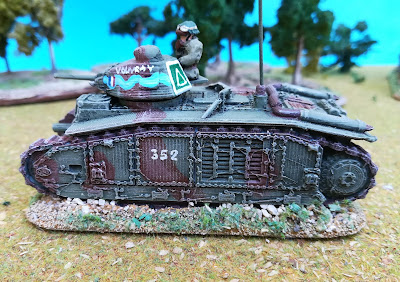 The MiniGeneral Char B1bis includes a variant with an open hatch for the commander, in this case the usual Skytrex figure. GBM magazine provided all information for the painting of the 41e and 49e heavy tank battalions camouflage and markings on its 127 and 128 recent  issues.
The only change in the MiniGeneral model was the gun tube that is too thick. Not bad on its own but too thick side by side with the other brands so I replaced them with surplus barrels from the PSC A9 tank. 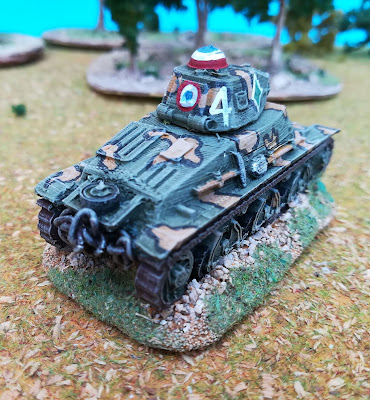 The Hotchkiss H-35 are also Minigeneral and the only adding is the typical towing chain on the back. The painting and markings of these tanks came from the GBM HS1 issue on the  mechanized cavalry.

The parade of the 14 Juillet. Printing lines in MiniGeneral, and other 3d printing brands actually, are getting less and less noticeable and the sceptics should start to consider them as a viable way to enlarge their collections.
Next: most probably more Brits for France 1940.
Posted by João Pedro Peixoto at 02:46