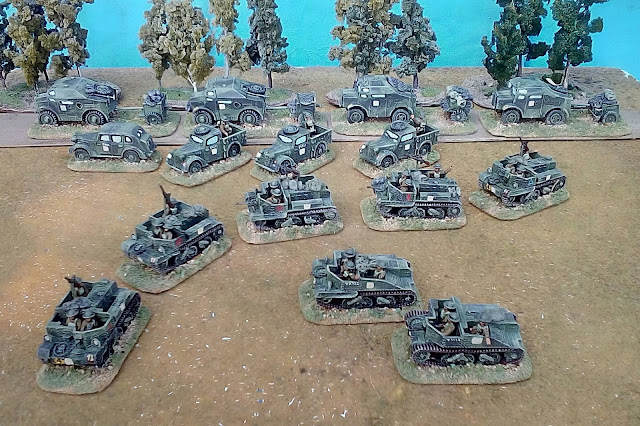 Elements of the Motor Battalions of the British 1st Armoured Division depart from Route Longue (not far from Bois Perdu and other stupid names I made up) in order to join the tank brigades for another push against the Germans. 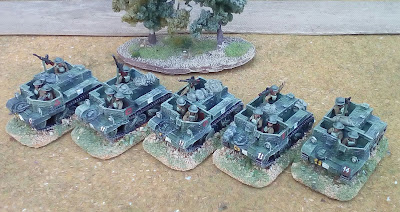 The first four Scout Carriers are from 2nd KRRC Motor Battalion while the one to the right is the missing Carrier of the 1st Rifles Motor Battalion. Here a big thank you to John Pews and Andre Foulkes for sorting out the correct markings for these units.
The Carriers are MiniGeneral 3d models with Hat torsos from the WWI US Artillery. I think these figures go very well for the BEF as they have clean helmets and the gas mask bag properly sculpted in the figure besides giving you 8 different poses. I burned the figure's legs and stucked them in place using a bit of two paste component for details.
The Scout Carriers are detailed minis, a bit difficult to clean but with patience you get a nice result. Only a small mast was added to place the Bren LMG. The Boys ATR is also provided. 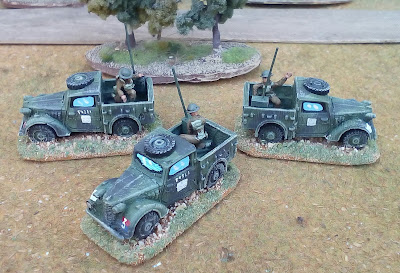 More MiniGeneral models this time a trio of Austin Tilly radio vans for the artillery batteries. The figures are torsos of Hat WWI US artillery again with Esci legs from the kneeling Enfield firer. The radios are Evergreen bits. 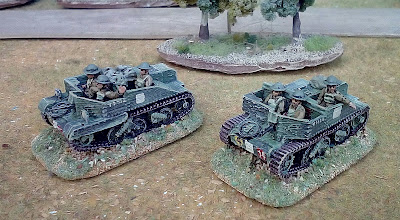 Two more Bren Carriers for the regular infantry Division again MiniGeneral with the same kind of conversions as crew. 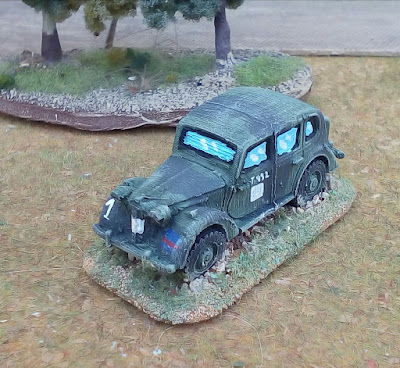 One last MiniGeneral model with this Austin 10 staff car.

Finally four Airfix Morris Quad to tow the 4.5'' Howitzers from Hat I built months ago. The two to the right are very old 1964  soft plastic models with bigger resin wheels and scratchbuilt trailers as they dont exist in the original. The trick of the wheels makes them the same size as the hard plastic brothers and very acceptable models. The holes of the windshields and all glasses were all covered with hot glue.

Next: Ottoman/Levantine infantry for Impetus and the battle of Mohacs 1526.
Posted by João Pedro Peixoto at 09:56