This is the Israeli army I managed to put together up to now. One of the Merkava was painted just a few days ago but most of this collection has already many years.

The same is happening to my Syrian army were I also use both 1/87th and 1/100th scales. If I had started these armies recently I would have stuck only to one of these scales.

But in the late 80's and 90's the variety we have nowadays didn't exist and I was mixing all 'small scale' (these two I'm referring) and keeping the 'big scales' (1/76th and 1/72nd ) together for other modern conflicts like Vietnam, Angola or the Gulf. 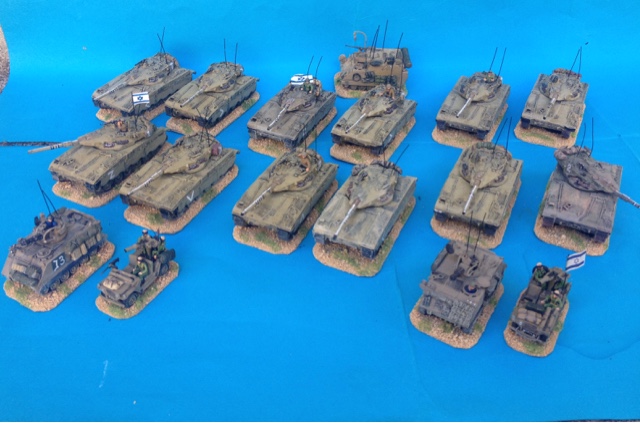 Starting with some heavy stuff I managed to build up to two battalions of Merkava I. They are all collectable Salvat 1/87th scale from a nice collection we had in Portugal over 15 years ago. This collection was made by the Italian Andrea Miniatures company. I run to all paper shops I could find even in other towns.

When the Salvat Merkava came out the collection was maybe in its middle and these guys were already hard to find opposite to the number 1 which normally floods the market.

The M577 command vehicles and the M152 jeeps are Roco Minitanks. 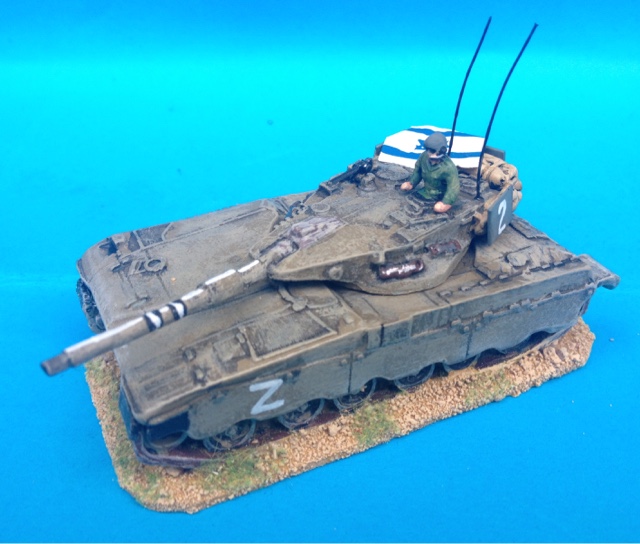 The Salvat/Andrea Miniatures were very nice models made in both metal and resin. The original painting was not very good but it was a useful primer and detail is good enough for washes and dry brush. 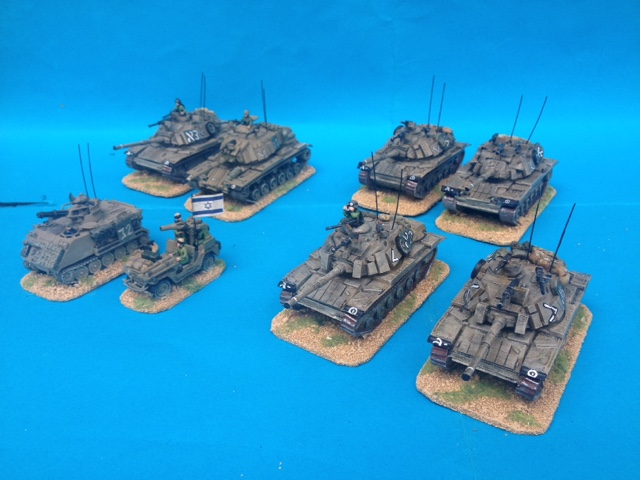 Only the second M60 Magach to the left is Roco, all others are Chinese copies I found don't remember where. As the Magach was covered with Blazer armour most of the inacuracies are hidden with plasticard pieces. The top right M60 is the only Salvat model I could place my hands on with added plasticard grading it to Magach. 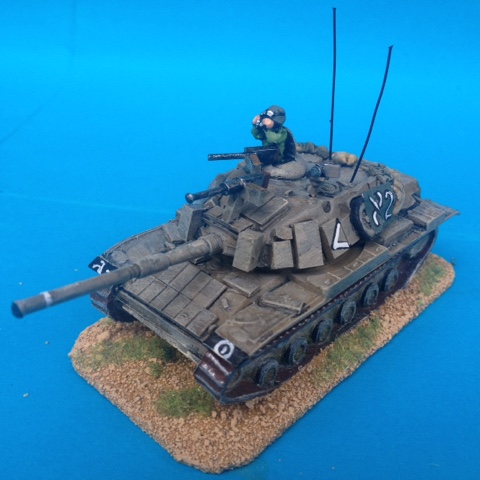 This is the final result of the Chinese copies.  The commander is a resin copy from the set of US vehicle commanders. 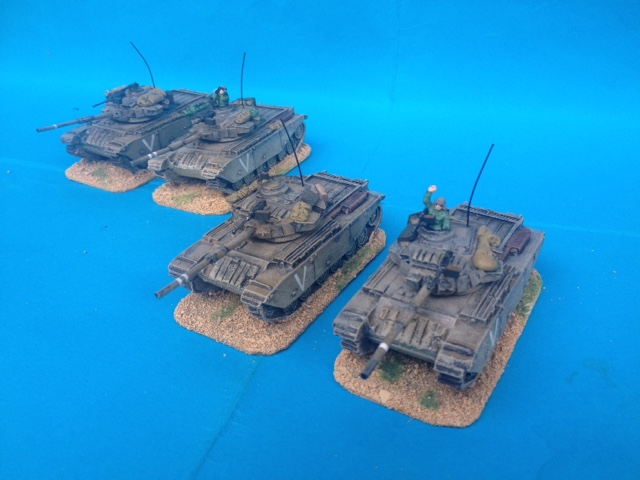 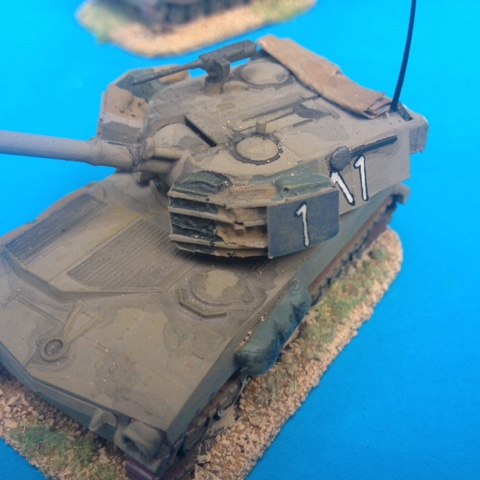 I built a set of two frontal stowage equipment for the M109 and cast a few copies in resin enough for an artillery battalion. 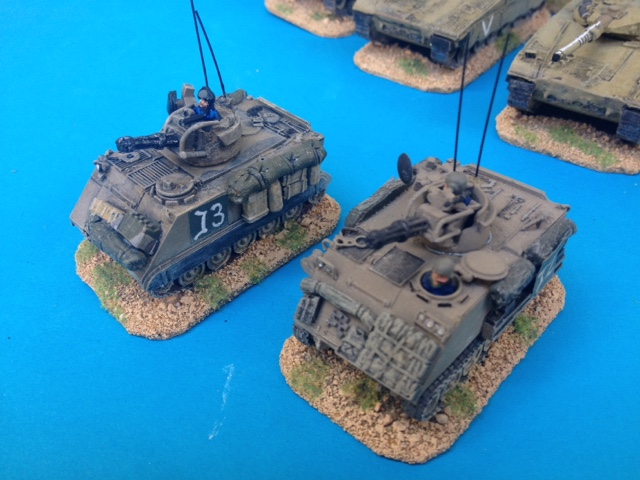 The Vulcan to the right is a CMSC model. Years later CMSC was closed and I scratchbuilt the one to the left on a Roco M113. The figure is a soft plastic Atlantic 1/87 taken from their small naval and  landing craft box. 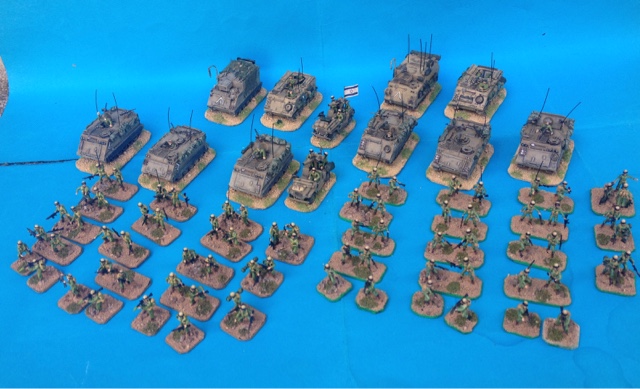 The Israeli mechanised infantry is made from 1/87th Atlantic infantry with loads of conversions as charged arms and added backpacks, antennae, Dragon missiles and RPG's from Esci ( yes, different scale but only you know). The M113 are Roco and the M125 mortar versions are Eko. 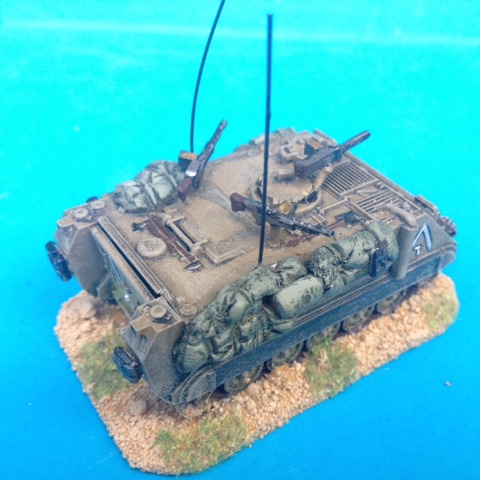 The Roco M113 have added extensive stowage all over, rear fuel drums, MG's and an Evergreen exhaust pipe to the right side. 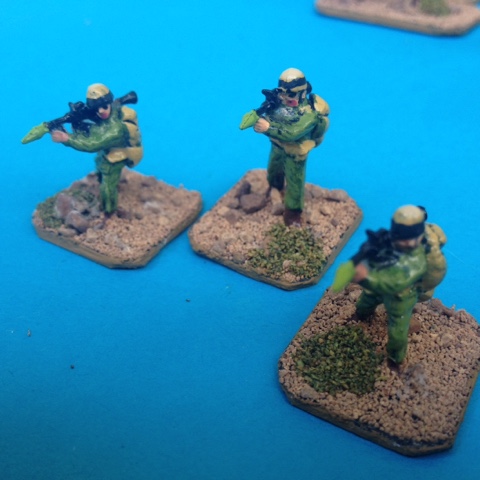 The RPG's conversions. Parts from Atlantic and Esci and arms from GreenStuff. 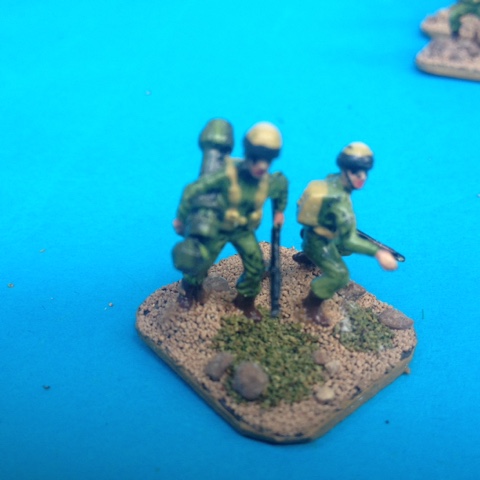 And the Dragon conversions (Roco Dragons and Atlantic bodies). 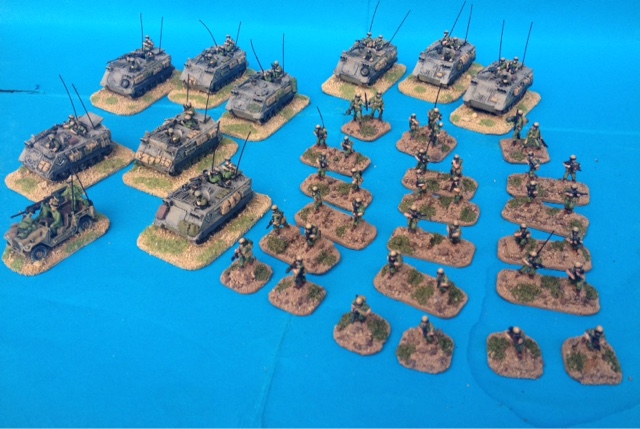 This other mechanised infantry group is all 1/100th scale metal mostly Peter Pig which makes some very nice Israeli infantry and vehicles. I base the 1/00th scale vehicles in the same base as the 1/87th if, as it is the case of M113, I use both scales to the same vehicle. 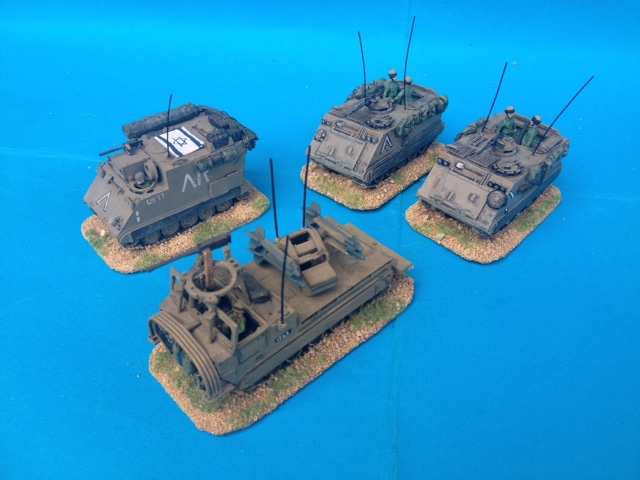 The Chaparral is Roco as well as the other M113. This group is the beginning of a divisional command and/or other divisional assets.

Let's begin the work and may the Force be with me. If the Force isn't, I'll return to the AWI...

Posted by João Pedro Peixoto at 14:11