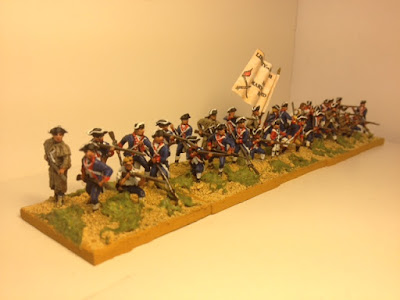 Managed to finish another American brigade. Fortunately they were quite small around 1777, with regiments from 60 to 400 men. So these 5 stands represent the entire 1st Maryland Brigade of Sullivan's Division. 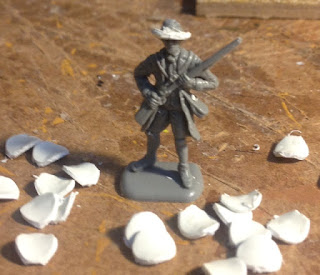 With my big numbers of tricorne infantry from the beginning of this project reduced to a few dozens I had to use the Revell American boxes more efectively. The problem is that the headgear of these miniatures is composed of some very specific ones that can only be used in some units and not representative of the vast majority of the Continental army.
This was my oportunity to use round hats, the most common headgear along the tricorne in the AWI... that don't exist in plastic other than for ACW and mine are all at usage. So I had to come with a way to produce round hats:
-I used a hole punch on a plastic sheet so the figures kept on being 100% plastic.
- Then I pierced the center of that circle with an X-Acto knife. Looks tricky but then you get used to it.
- Finally I trimmed the head of the victim a little bit if necessary so the roundel can fit.
- Glued it and that's all. 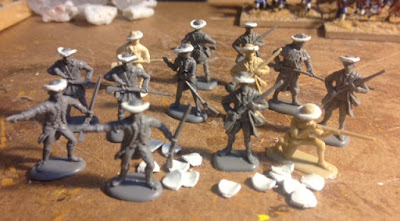 Then I got excited (in modellistic terms, that is) and made the same to many figures. Specially I used heads which are bold, or with hoods or without any headgear. 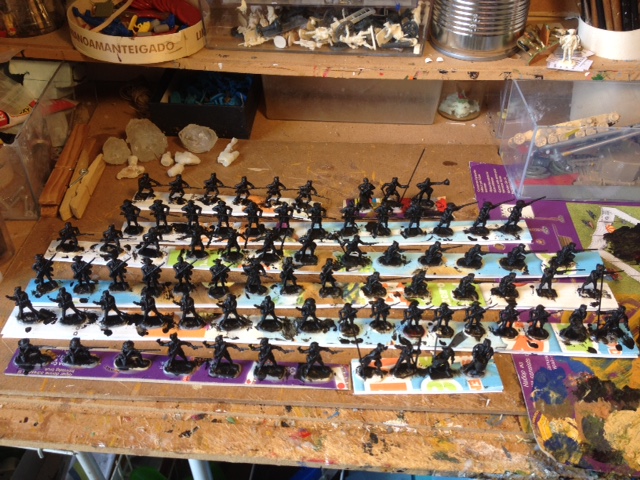 So a new division is about to show and that will be "Lord" Stirling's division with a total of 13 stands. 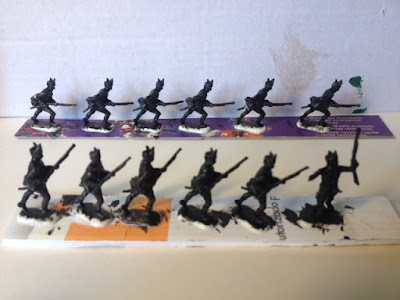 And now a bit of a challenge with the usual prize (that is the pleasure of guessing and writing it to this fantastic blog that rocks the wargaming and modelling world each few days).
Any guesses to which famous unit from the AWI is this one...
...made out of Revell Austrian Grenadiers?
... cutdown jackets... rifles...
No?...
Ok, it fought on the British side.
Sorry, that's all the help you will get.
So run to your source books and web and risk yourselves to the prize described above.
Good Luck!!!
Posted by João Pedro Peixoto at 13:04