Rapid Fire! Blitzkrieg in 20mm - Smialy(ish) Polish armoured train (or 'A walk into the Chinese shop')

Years ago I saw a scratch built model of the famous Polish armoured train Smialy in a wargames magazine that wet my apetite for trying something of the sort. Recently Adrian White showed a fantastic scratch built Smialy in a conversation on the Rapid Fire WW2 Wargames Rules FB page. Honestly I tryed to copy it but soon I noticed that in order to have something similar it would take a month's work. Just too much for me as there are plenty of stuff in the pipe line. Another option was to buy Fow's Smialy but being a 15mm model and at 150 Euro I decided to look in another direction.
In my local Chinese shop they had some 20mm-ish toy trains that I used for this conversion. Each set has a locomotive, a coal wagon and a coach. You need five of these sets in order to have Smialy but at 5 Euro each you are still far from Fow's price. And, as with all conversions, it will be my preeeeciousss.... 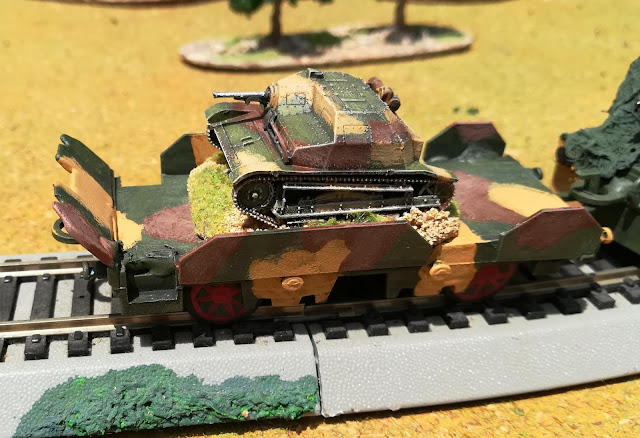 The front and back Flat Railcars usually carried a small Tankette (FTFmodel) and they were transformed from two of the coaches.

The Artillery Wagons are made gluing two locomotives back to back. With four locomotives being used this way and another for the Armoured Engine all five locomotives of the five sets were used. 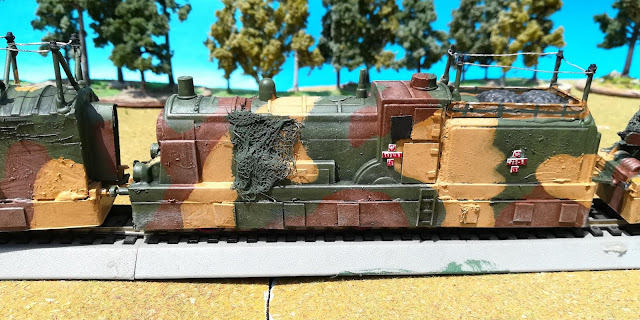 The Armoured Engine is made from a locomotive and the coal wagon glued to each other. 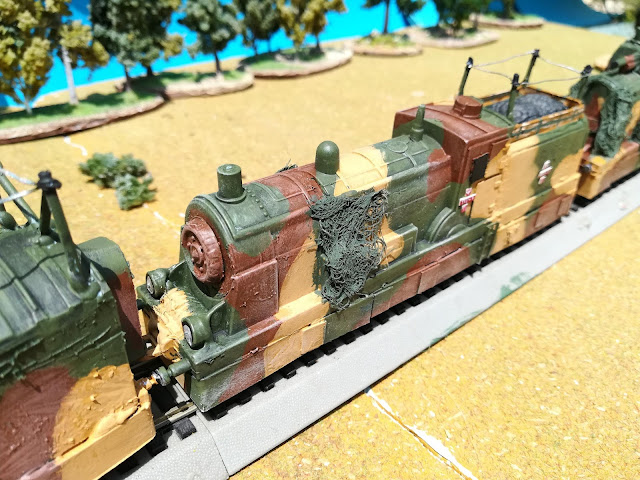 Plenty of camouflage nets were used to disguise the numerous flaws of the original models that are just originally intended as cheap toys. 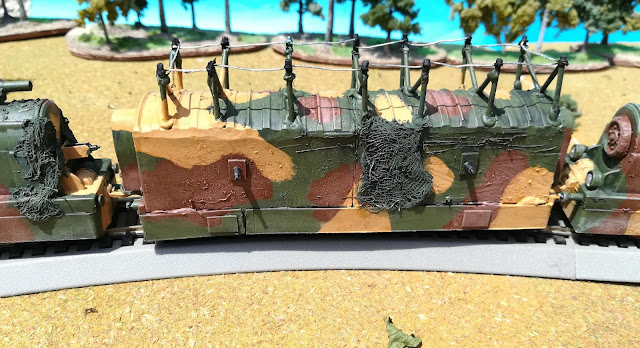 The Assault Wagon is made from the junction of two coaches. 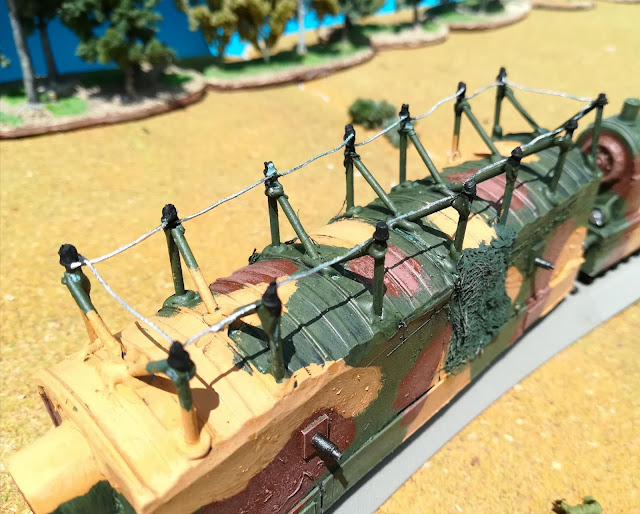 The aerials are metal pieces glued on the roof after drilling holes in that nasty plastic of these kind of toys. Here you have to call all your available patience. 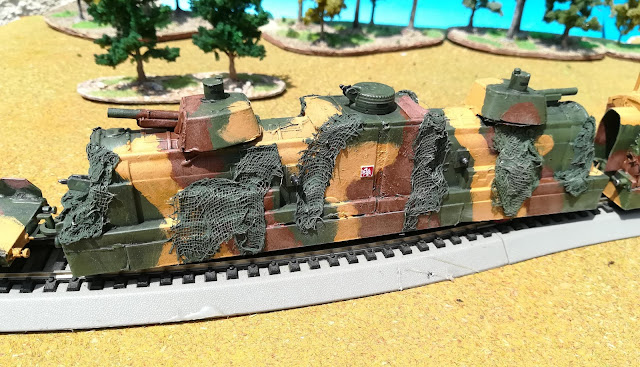 The Artillery wagon has some old soft plastic Atlantic T-34 turrets carved out to look slightly as the original 100mm and 75mm gun turrets. 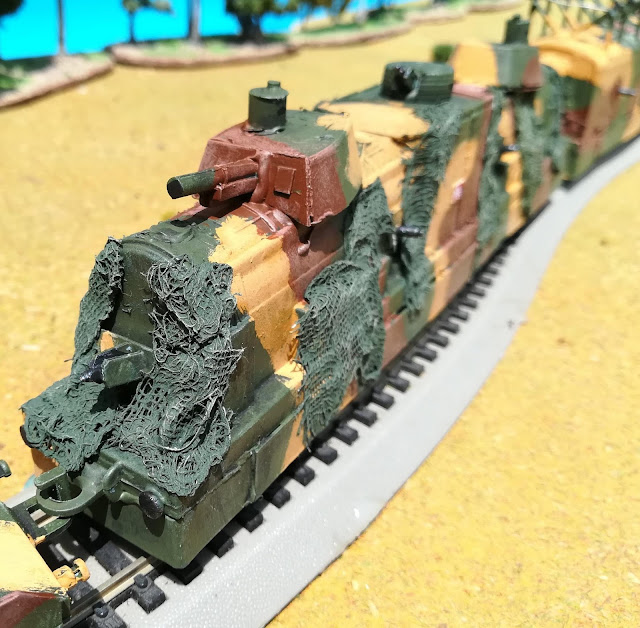 The gun tubes are from some old chinese models I had around suitably carved to shape. 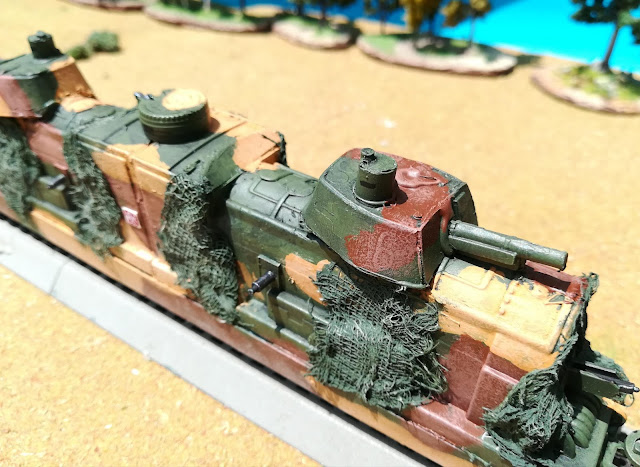 The central turret is made from a 1/43rd rallye car wheel.

The full set measures almost one meter and now I'm ready to push back 4th Panzer Division at Mokra!! 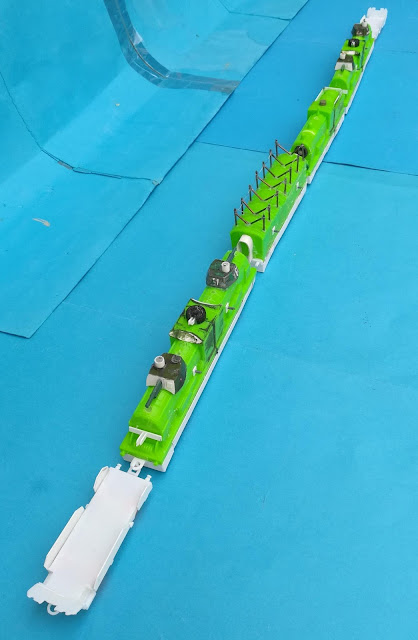 Here you can see the two main components of the set: the Chinese models and Evergreen Plastic card. 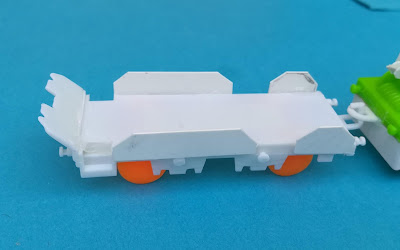 For the Flat Railcar you need to change the place of the wheels and glue some small walls to the sides besides bending the front ramp.

You can see here the seam of Liquid GreenStuff placed to disguise the junction of the two locomotives on each of the Artillery Wagons.

In all lower parts of the wagons a strip of 1 cm of plastic card was used as the protection of the wheel set.

More Liquid GreenStuff was used for the joint of the locomotive and coal wagon. 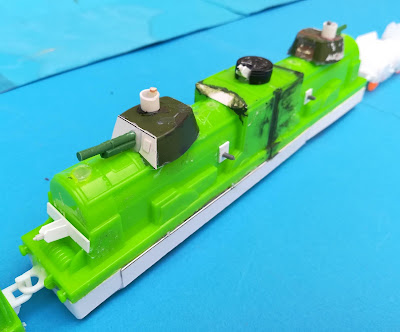 The ending parts of each of  the Artillery Wagons were true nightmares to convert to the proper shape and so I left them as they were and covered those parts with gauze. 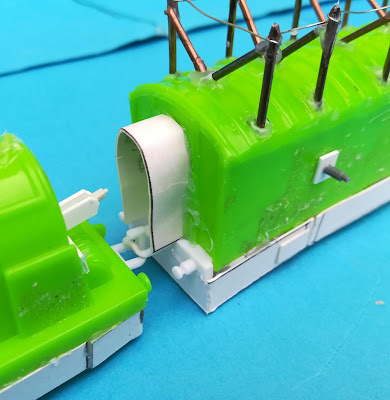 Mg's were made from surplus Besa Mg's from the PSC A9 Cruiser tanks.  The metal aerials were drilled into the plastic and strenghtened with hot glue and super glue. 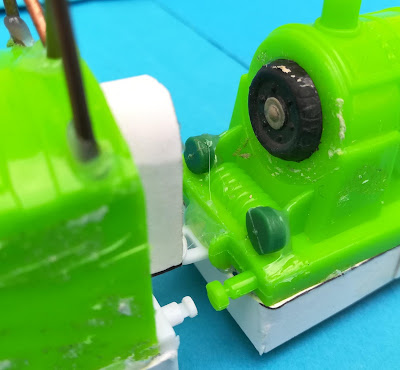 An old half tyre was used as the nose of the locomotive. 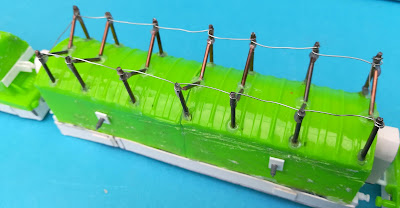 The wire for the aerials is true wire wrapped around each pole. 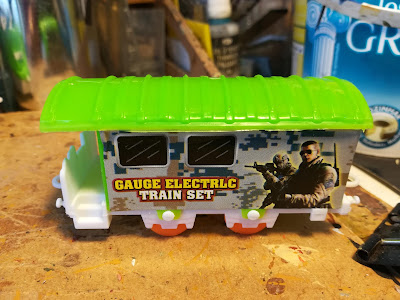 The original wagons are like this and a lot of work is necessary only to take the adhesive paper out. 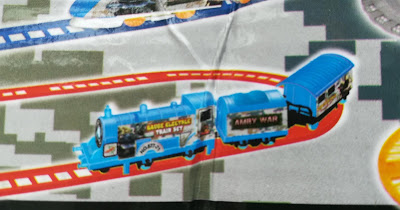 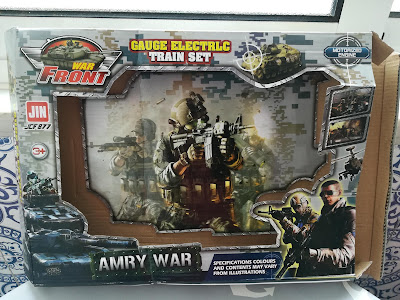 And the box interestingly called 'Amry War'. I also think this is a good basis for conversions of ACW, Old West, African, or any other WWI or WW2 trains. You just need to be patient with this kind of plastic and use your imagination.
Next: More Polish stuff, of course!
Posted by João Pedro Peixoto at 07:49