When I was a kid I read in a comic book the actions around Mortain in Normandy, 7-12 of August 1944. Uau, Germans leaving their foxholes and attacking American positions! And there was no snow! What a difference! Along the years while reading more on the subject I learned that if I could make all German Panzer Divisions present for Operation Lüttich I could have the German forces for any operation ın Normandy and virtually any scenario in the Western or even Eastern front in 1944/45.
With a few extras, the Arnhem, Ardennes or Bagration campaigns could also be made from the German side. With this idea in mind I started to build my German army for 1944/45 around the Mortain Counter attack. Even my American miniatures for the period are built around the 2nd and 3rd Armored Divisions and the 117th Infantry Regiment,  the main opponents of Operation Lüttich.
The six main German divisions - 2nd and 116th PzDiv, 1st and 2nd SS PzDiv and 17th SS Pz Grenadier Div (also Pz Lehr in supporting role) - were all quite depleted and could only amass  250 to 300 Panzers. But those Panzers were supported by many SPG's, Stug's and Half Tracks, etc in a total of around 1500 vehicles. In Rapid Fire! terms this represents around 50/60 Panzers in a total of 300 AFV's. These lasts two numbers are my aim for German 1944/45 forces.
Unfortunately no Tiger battalions or the French conversions of the 21st PzDiv were on this battle but at least as I wanted to have on the table the full German army I could use some material from the 21st PzDiv namely the PzIV's and the Sdkfz 251's.
Most of this stuff I'll show you in the next few weeks was made before Armourfast, PSC and alike emerged with their 2/3 models in a box and much more complicated models had to be built by then. Fortunately as this collection took many years to build, and is still not finished, I was able to include many Die-casts from DeAgostini and such.
The first Pz Division I'll show you is the 2nd PzDiv. It still had around 60 Panzers and a good amount of mechanized infantry with two SPW battalions. The trident was the divisional symbol in Normandy with the inverted Y being recently replaced. I placed the divisional symbol in all vehicles so I can recognize easily each unit in the shelves. This division was built mostly around 1/76th models for the sake of uniformity.

The 2nd Panzer Division was still  Kampfwert (combat value) I  in spite of the loss of over 50% of its tanks. The infantry and artillery was still in good shape. 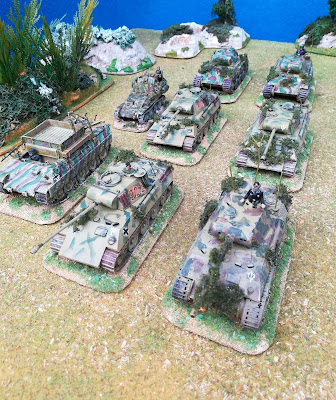 According to some sources only 5/6 Panthers (other source mentions 13) remained in Pz Reg. 3  but I also found the reference to 30. 2nd PzDiv. divisional assets were concentrated in Kampfgruppe Schacke which also had Panther from 116th PzDiv. I prefer the last number and so 6 vehicles in RF! terms in this battalion. All models are Airfix and the ones camouflaged only in green are the very old soft plastic versions. The Bergepanther is a repainted Altaya. The Pz38t Gepard is SHQ. 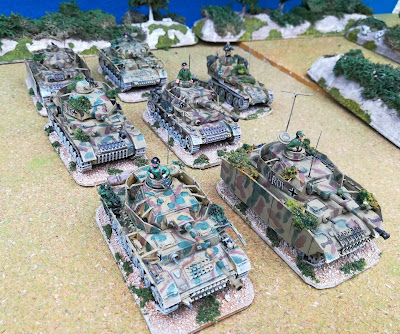 Again Airfix for all these PzIV with a another Gepard from SHQ. 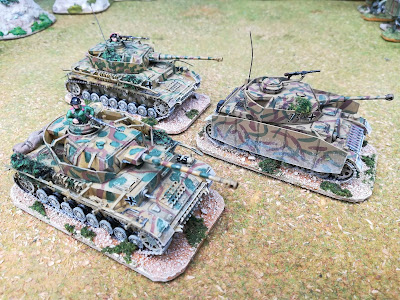 All of them got plastic card structures for the passive armour and longer gun tubes as the Airfix model is the F2 and the G and H version are the ones needed for 1944. 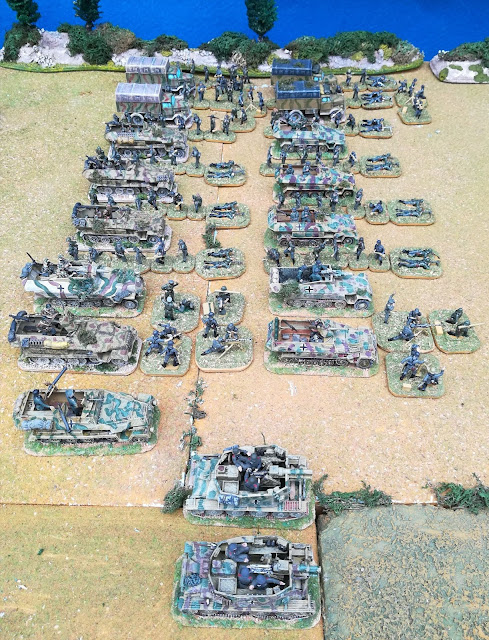 Pz Gren.Reg. 2 (left) is Esci and Hasegawa on its Sdkfz 251's and Pz Gren.Reg. 304 has Matchbox and Frontline Wargaming models. All Opel Blitz are Airfix. 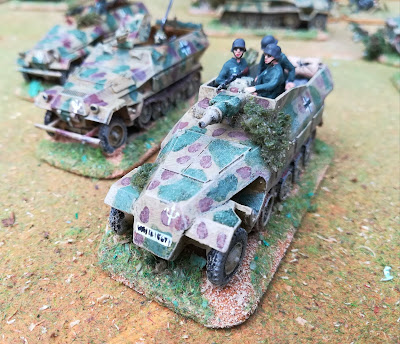 I painted tridents in front and back of all vehicles identifying  2nd PzDiv models like this Frontline Wargaming Sdkfz 251/9 with plastic crew. 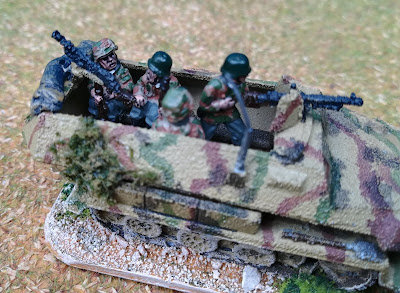 Others have Britannia crew mixed with plastic figures. I'm no racist! 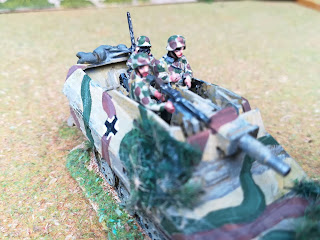 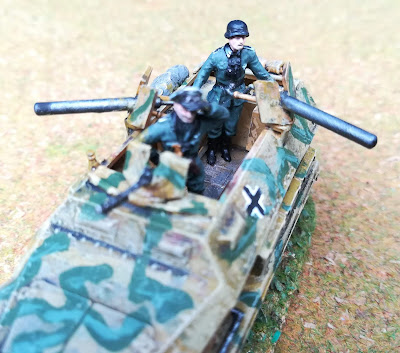 The Sdkfz 251/16 Fammenwerfer is an Esci model with Airfix and Matchbox crew. 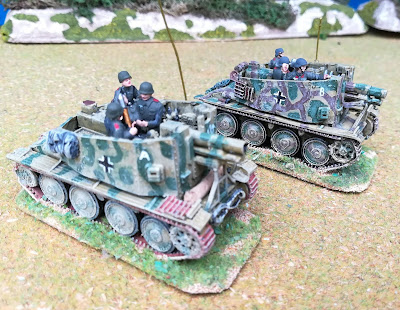 These two 38t Grille for Panzergrenadier support are Attack models with crews from other plastic companies. 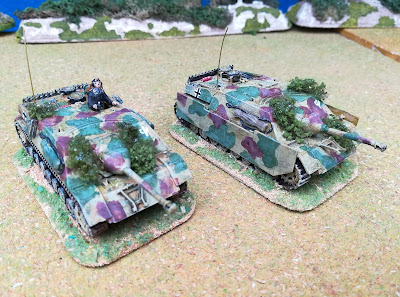 Esci Jagdpanzer IV from PzJäger Abt. 38. 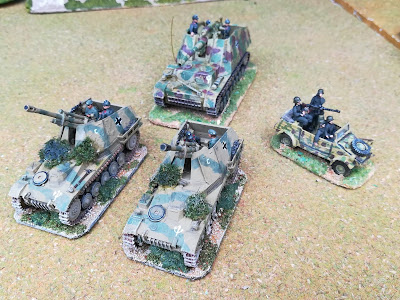 The full Art.Reg 74 is Esci in all Wespe and Hummel Sp's. Only the Kubelwagen OP is Hasegawa with Atlantic and Revell crew. 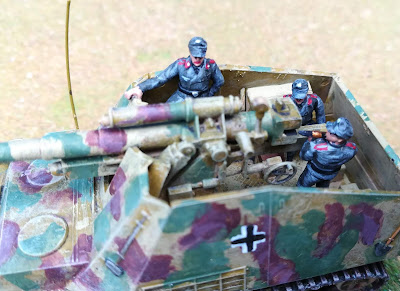 The Hummel has PSC crew. 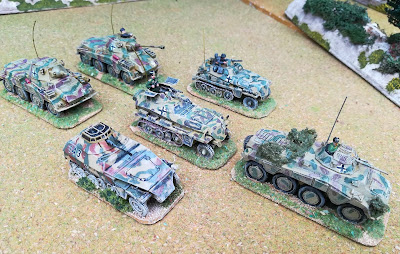 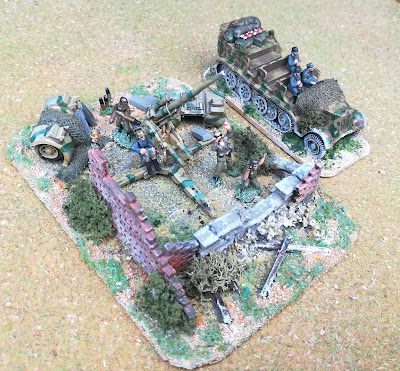 The Airfix 88mm set with gun placed in a small vignette to represent Flak Abt. 273. 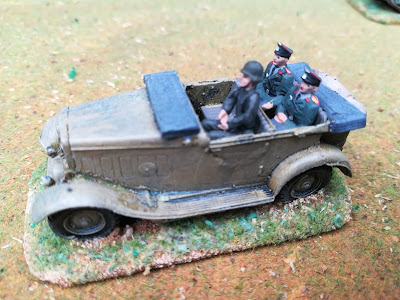 General von Lüttwitz seating in the back of a Frontline Staff car. I never know if he is the one on the right or on the left... 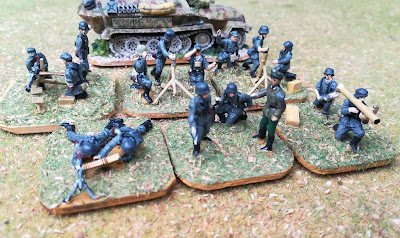 The infantry is a mixture of all old plastic brands available. I need a total of 16 infantry battalions so even these old ones have to be pressed into service. 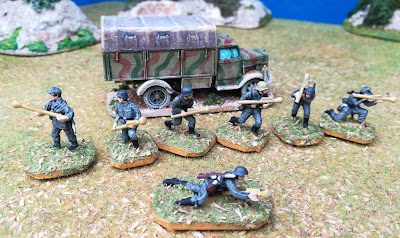 I always prefer to place more than less miniatures in my OB's. Probably this division was not so well armed. The problem is that sources are contraditory and I always prefer the numericaly stronger possibility. In fact if you want a wargame about Mortain the Germans must have some numbers otherwise the Bocage country that helped the Germans so much since June will quickly turn against them. Besides as I use mostly cheaper plastics I can keep costs down.