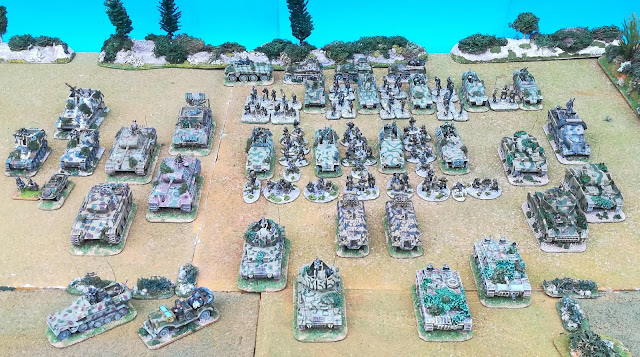 Now for 2nd SS PzDiv. 'Das Reich'. Infamously remembered by its massacres on the civilian population in the eastern front  and on the way to Normandy in Tulle and Oradour-Sur-Glane, 'Das Reich' division was pretty down sized by the time of Mortain specially in armour. For this big unit I looked mostly for 1/72nd scale models. 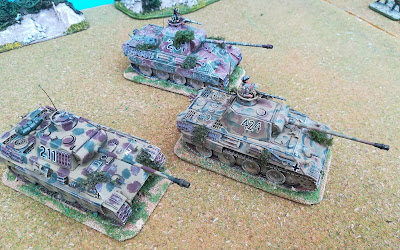 The leading Panther (Revell) is the  424 of the famous Ernst Barkmann. In fact Barkmann was not at Mortain enjoying a break after the events at “Barkmann’s corner” but its impossible not to field its tank even if Steven Zaloga doesn't like it. The other two tanks are Hasegawa. 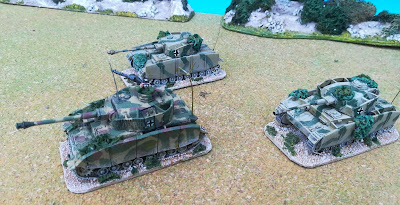 A bit of resin and metal for these PzIV. The leading vehicle is the Britannia version of the PzIV H, the other two are Frontline Wargaming. 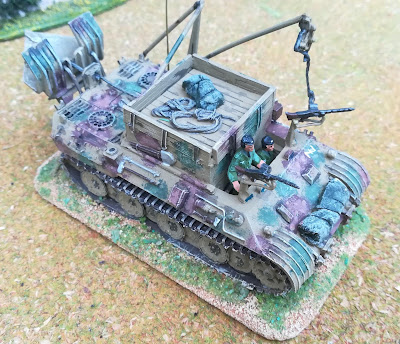 And a bit of recovery capability for the SS PzReg.2 in the form of this Bergepanther A from SHQ. A true shelf bender. 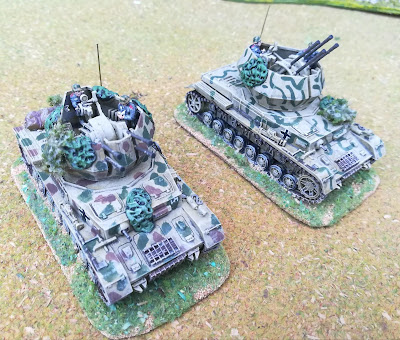 Flakpanzer IV Wirbelwind  from Hasegawa. SS divisions were always getting the newest material. 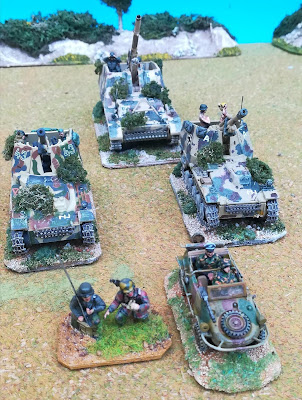 An all Altaya SS Art.Abt. 2 with Wespe and Hummel SP. The OP Schwimmwagen is Hasegawa and the foot OP team is Valiant. 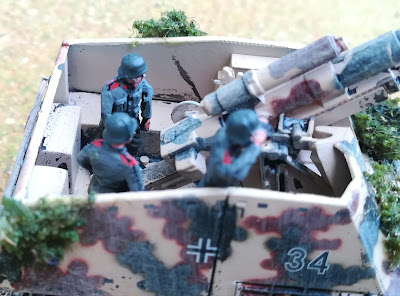 This Die-cast Hummel got a crew from Airfix. 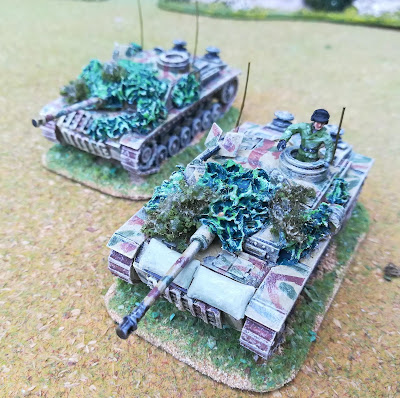 SS Sturmgeshütz Abt.2 got a pair of Armoufast Stug III. 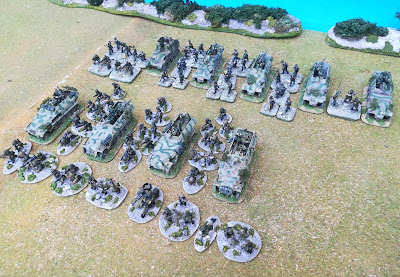 At Mortain both PzGren. regiments were quite depleted so I used the halftrack  battalions of both 'Der Führer' and 'Deutchland' regiments to portray its infantry (besides I have more HT than trucks ...). 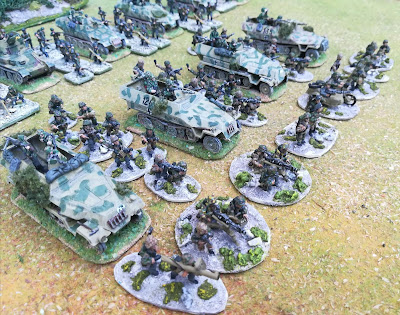 This battalion is made of Britannia figures which are a true delight. The Sdkfz 251D's are Hasegawa and the sole 251C is Esci. 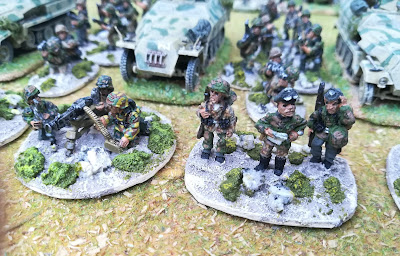 With their blowned up heads these figures are detailed and easy to paint. 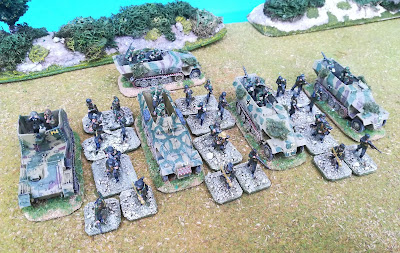 The other battalion is made of all available plastics turned into SS figures. The LMG's and Panzerfaust figures are Irregular Miniatures The Sdkfz 251D's are Frontline Wargaming. The Grille SP is Britannia. 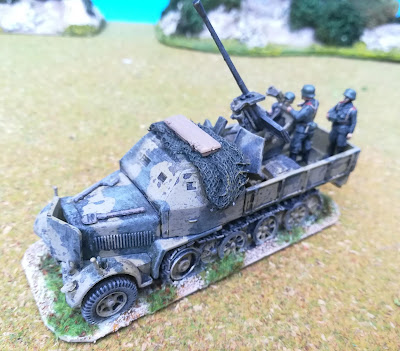 This Sdkfz 7/2 with 37mm AA gun for protection of the PzGren regiment is an Altaya model with Hasegawa and Esci crew. 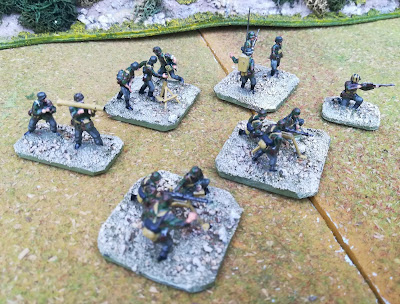 Plenty of conversions and brands as you can see here: Revell, Esci, Airfix and Armourfast. 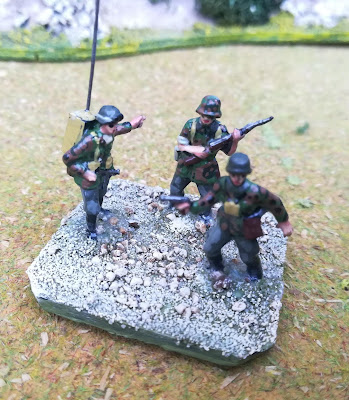 The Command stand has a radioman from the Revell Afrika Korps, another Afrika Korps figure from Airfix with new legs and an officer from Esci. 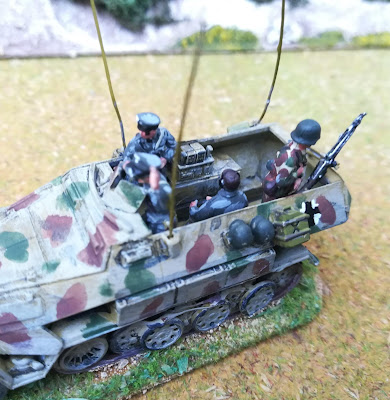 This command Sdkfz 251 is a conversion of a Matchbox model and it was fitted with a lot of radio equipment and antennas. 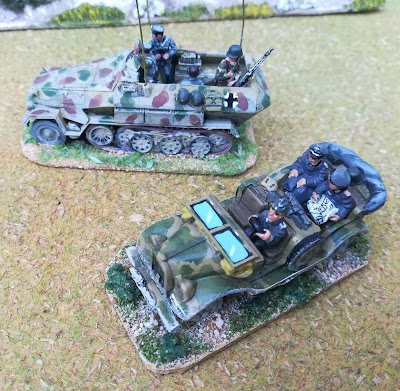 Gen. Lammerding  is looking at the map for his escape route after the war. Staff car and figures by Britannia. 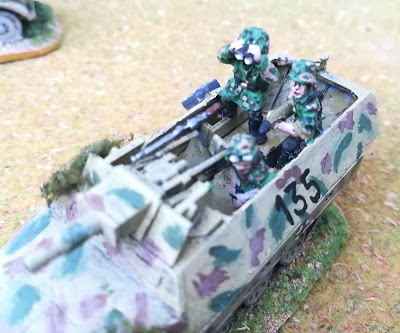 The SS figures have to have the splinter camouflage as in these Britannia figures inside a Hasegawa Sdkfz 251/9. 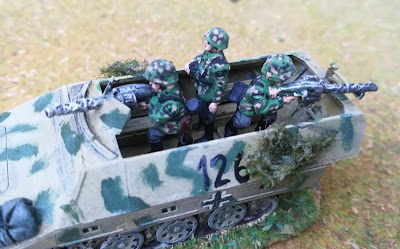 More splinter camouflage in these Britannia and Esci figures. 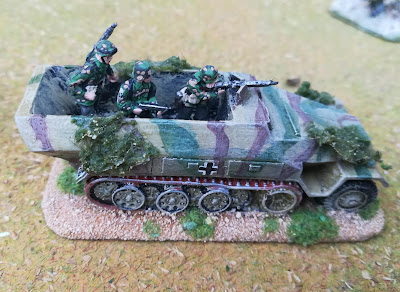 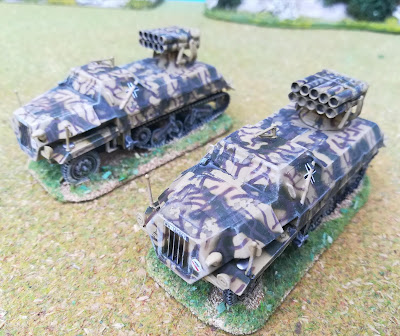 Posted by João Pedro Peixoto at 17:49