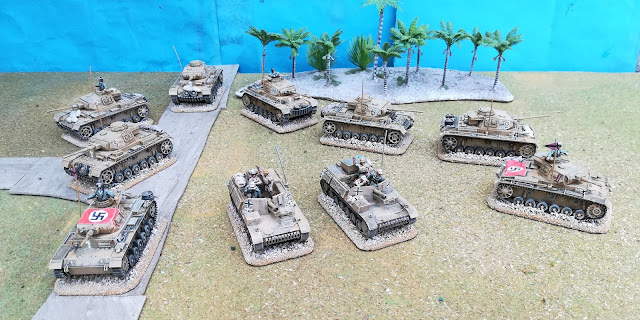 A mixed column of PzIII's both from 15th PD and 21st PD approaches the oasis of Ras-El-Angelamerkel following Rommel's plan to invade Egypt.
These PzIII are the last eight I needed for the two DAK Panzer divisions. Now they total forty PzIII and  only one PzIVD and a few PzII are missing for my DAK tanks to be complete. At the same time that it's great to be finishing a Corps size unit like the DAK one can't avoid the feeling of some sadness for something that is now over and that you were building for so many years. Of course giving stupid names to the places were your models are being pictured helps lowering the gloom... 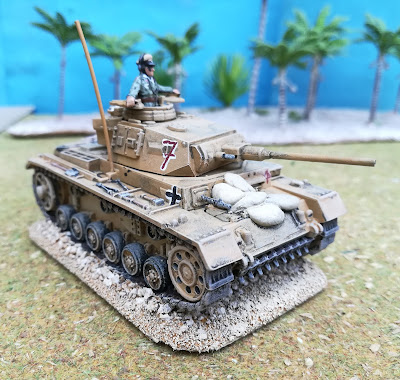 Six of the Pz III are J versions converted from the PSC PzIIIG/H by changing only the gun barrel. 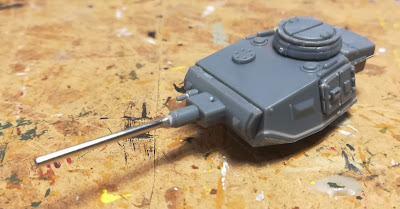 The conversion is quite simple. I used some metal hollow metal tubing I bought in my last raid in Lisbon. You just need to drill the jacket with a 2 millimeters driller and insert the metal tubing. The Pz III J already had the long 50mm L/60 gun but still used the mantlet of the shorter L/42 gun instead of the space armour frame of the later L version. 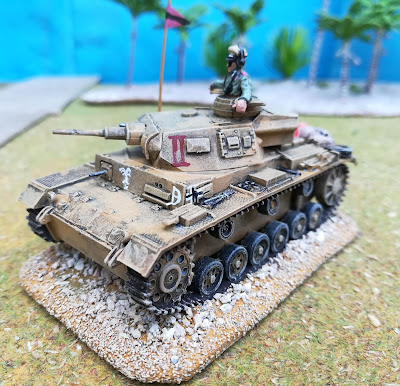 The two command tanks are S-Models with PSC commanders. They are straight from the box constructions without the typical rear antenna of the standard Panzerbefelhswagen in short supply in the DAK. 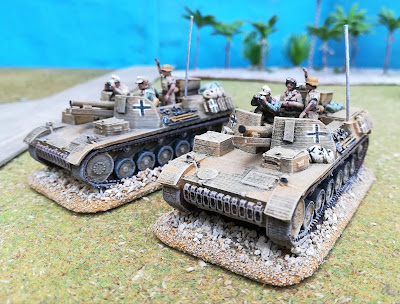 The two 15Cm sIG33 PzII's are hot from the printers BPM models. They are a nice rendering of this important machine for the OB of the 90th Light Division and a not very common model as only 12 were actually built. 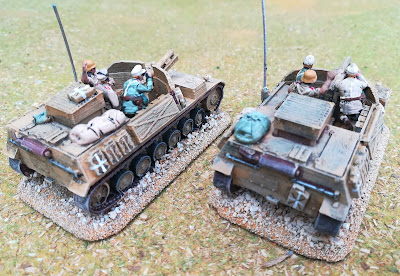 The usual stowage, antennae and crew was added as well as a left front vision slit that is missing. 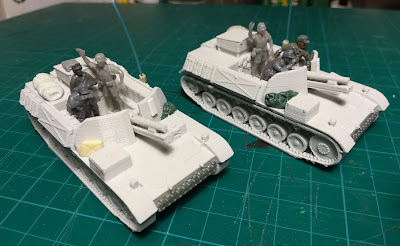 You can recognize the crew from the old trusty Airfix DAK surrendering figure, Matchbox hard plastic DAK figure; Hasegawa Tiger commander and PSC 50mm gun observer.
Next: A return to France 1940 with an other hartbreaking finish of some important machines of this conflict.
Posted by João Pedro Peixoto at 03:14