With two companies in the first line and one (understrenght) in support, with the M5 light company wiped out in a previous fight (please read the true reason in the last post) another Sherman battalion sprangs its attack on German lines. From the back there is command Sherman and, on top of the hill, a support M4 HT 81mm mortar carrier and Sherman 105mm Howitzer. 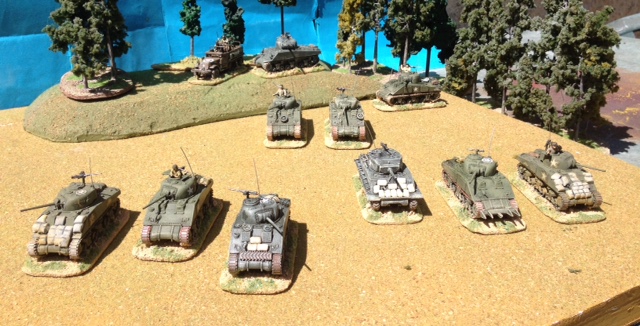 Maybe I should have started with this one. This battalion has the early M4(1942) model with M34 gun mount that in spite of its age soldiered in many units up to the end of the war. It could even be seen in units along M4A3E8's, one of the last models of the Sherman.
Another reason for bunching these models together is scale. They are mostly Airfix 1/76th scale with one Jumbo by SHQ also in 1/76th scale. My other 75mm Sherman battalions are 1/72nd scale. 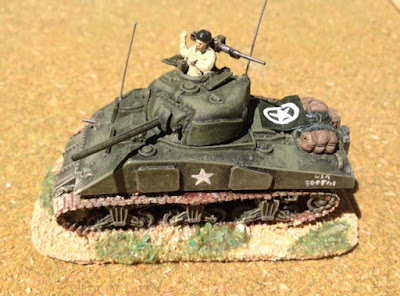 The Co tank is Airfix with added Fujimi's turret extra armour and figure; double antennae, HMG and stowage. The right hull extra armour is wrong as it only existed on the right side of the Shermans so there should be only one in the picture. Consider it a moving castle!!

A few more examples of improved Shermans: you can apply the usual sand bags or even a Cullin Hedgerow device taken from the Revell Cromwell. Other details as the Co Sherman. 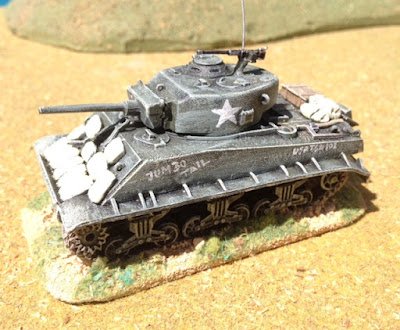 The SHQ Jumbo also had some extra sand bags on top of its already extra protection. 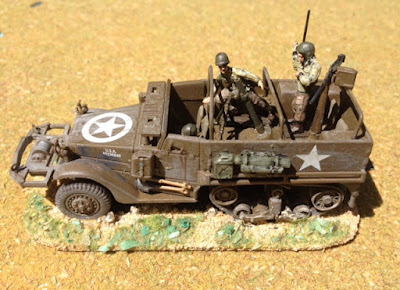 The M4 HT 81mm mortar carrier from Altaya is on a brownier shade of OD but quite passable so I left it as it came. I just added the usual crew of plastic figures.

Posted by João Pedro Peixoto at 09:41