As I told you before the idea of having all Mortain units was to have the ability to wargame any of the big campaigns in the West and even in the East. Before the Mortain series of posts I already had showed  a number of full units that had the Goodwood operation as background like the 21st PD, the 16th LFD, the Tiger Tank Abt.503, or the British 7th AD, a Sherman based Division or a Churchill Tank Brigade. Having the 21st PD in particular, which had over 100 Pz IV (20 + in RF! terms) allows you to have enough Pz IV to distribute along the Germans divisions at Mortain (21st PD was not at Mortain) or any group of divisions for many other campaigns of late WW2.

But Normandy is not over with Goodwood and Mortain. And if you want to be able to play all late war possible scenarios you need a few more things. Today I'll show you my German units for other sectors of the Normandy front and a few for late 1944. 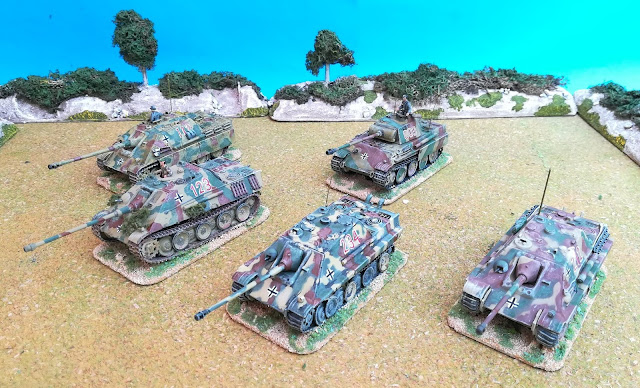 The s.Pz.Jag.Abt. 654 was equipped with one of the most deadly SPG's of WW2, the Jagdpanther, and became famous both in the Eastern and Western fronts. In the latter its first action was against British Churchills in Normandy which could do little against the terrifying 88mm KwK 43. The battalion never acted as a full force so I'm representing it with two companies of 2 models each with a Befehlspanzer Panther as the command vehicle of the unit. 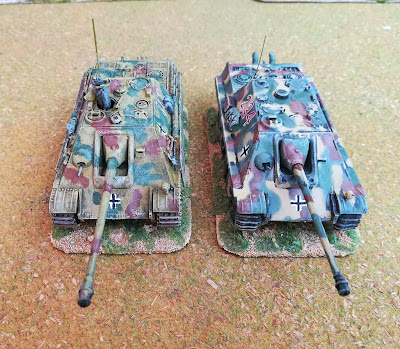 The models are a mixture of Esci (L) and repainted Altaya (R). Both are 1/72nd scale and the only visible small difference between the two brands is the length of the main gun that is slightly longer in the Esci version.

Another interesting characteristic of this unit is the German AFV cross painted at the front. I'm not sure if it was used in Normandy but it shows up in pictures of this battalion later in the war. 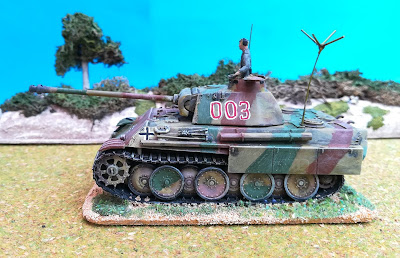 The Befehlspanzer Panther is an Hasegawa model with a new scratch built star antenna. 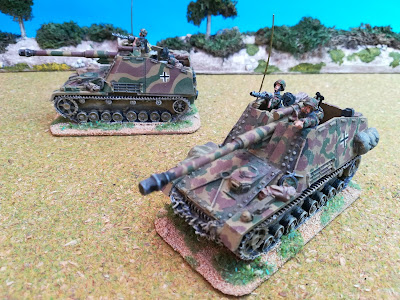 These two Nashorn are Britannia. The Nashorn was the first solution the Germans used to place the 88mm Kwk 43 in the chassis of a tank. Used at Kursk for the first time it was built up to the end of the war due to its success as a Tank-killer.  This SPG was not used in Normandy but Italy, Eastern Front and Western Front closer to Germany's border are all possible scenarios for these models. 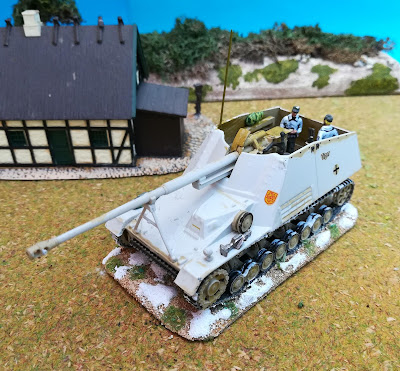 Just based and crewed and slightly weathered this Altaya Nashorn is ready for Winter war against both T-34 and Sherman or even against late Pershing tanks like the one destroyed at close range in March 1945 close to Cologne...

The gun barrel of the Britannia model is much shorter and thicker than the one from Altaya. The Britannia model is typical of the brand with a model that captures the main characteristics of the real thing and then uses sturdy details almost indestructibles on the table. On the other hand the Altaya version is all about accuracy and elegance.

Next: a return to Sekigahara 1600 before more late Panzers.

Posted by João Pedro Peixoto at 09:19