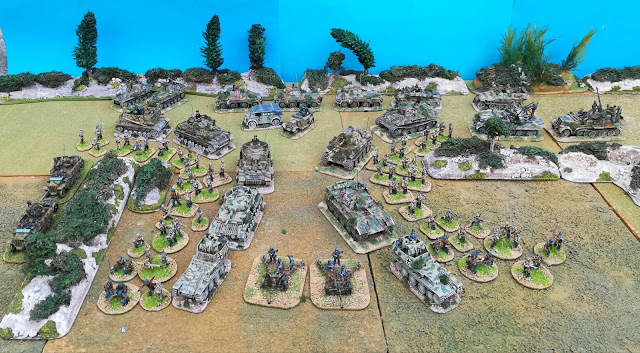 This series is finishing in the beginning of August, about the time of the Mortain battles just by mere luck not on purpose. Here you have the two Kampfgruppe in which Panzer Lehr was divided after Operation Cobra, KG Von Hauser and KG Ritgen. The CO of Pz Lehr. Generalleutnant Fritz Bayerlein reported catastrophic casualties from the carpet bombing of Cobra and the following assault by two US tank divisions. But it seems they were exaggerated as other officers from the division reported much smaller casualties. Apparently Bayerlein was trying to save the division from further damage. Thus the two KG of the division played only a small role at Mortain with Von Hauser behind the main assault and Ritgen  much to the rear.

In the top picture the two KG are forming. The Panther battalion is reduced to 3 (RF!) tanks, same with the PzIV battalion as the Lehr tanks were only a bit more than 30 around the 5th of August. On the right you have the AA assets of FlakAbt. 130 close to the remnants of the Pioneer battalion. In line at the rear the Recce bat.130 has its eight wheeled vehicles ready for action. To the left the SP's are providing some fire support while the AA half-tracks of the Pz.Gren. regiments are waiting on the side of an hedgerow. The Fallschirmjäger of II Corps gives the necessary infantry and PAK for this advance with Pz Lehr being subordinated to this Corps during the Mortain actions. 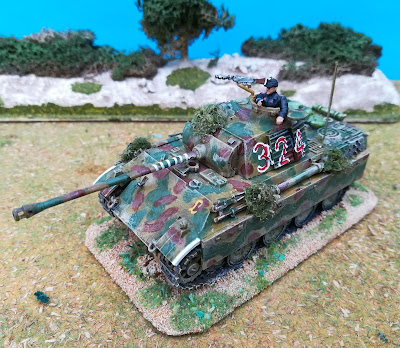 This Nitto/Fujimi Panther has its big white and red number painted over the turret protective track pieces. Another typical characteristic of Pz Lehr Panthers were the white painted front mudguards. A PSC crewman was the only addition to the model. 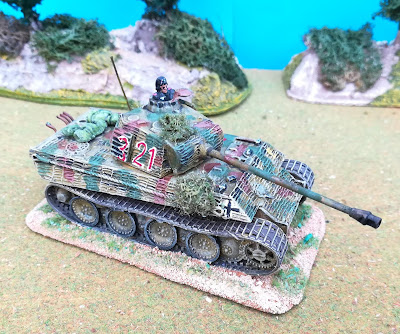 Now this one is a work of art. It was gift from my friend Jorge Faria, the 2nd biggest wargamer and model maker of this country. He carefully used a hot steel to carve the Zimmerit on this Matchbox model, something that many of us thought about but few had the ability to do. I only repainted it in order to have the same tones of colour in all models. 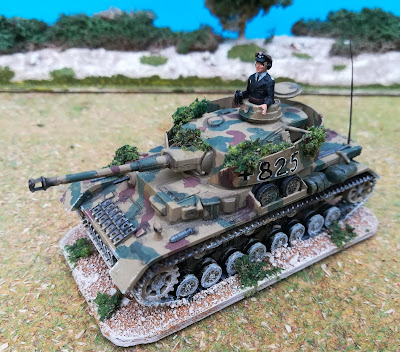 The PzIV are Esci built straight from the box with the usual add-ons. 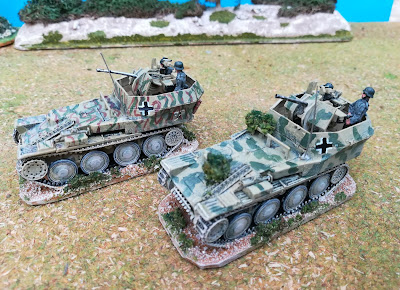 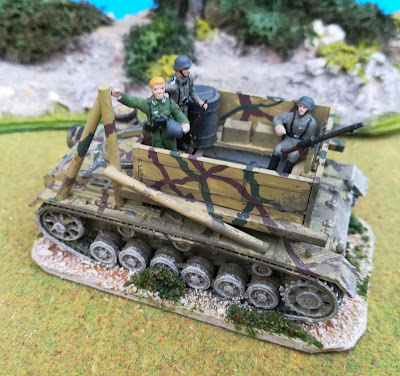 This Bergepanzer III is a conversion from the Matchbox Pz III. 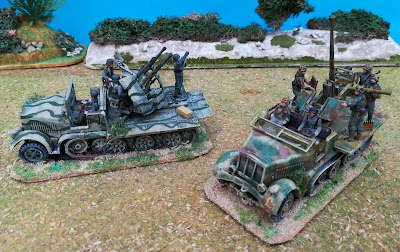 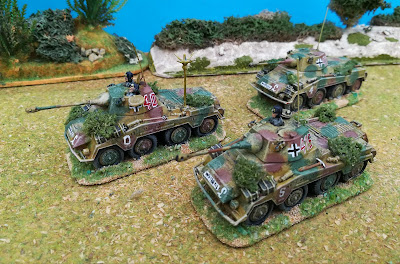 Probably Pz Lehr still had some of the 25 Sdkfz 234/2 'Puma' of Panzeraufklärungs-Lehr-Abteilung 130. I used three to represent approximately half of 4th company still  in existence a number probably exaggerated as the reconnaissance units of WW2 had the higher percentage of casualties. 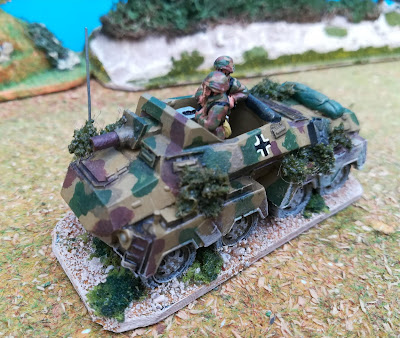 Another asset of the Recce battalion is this Britannia Sdkfz 233 with SHQ crew. 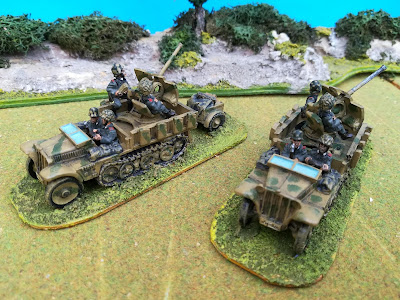 Two more Britannia Sdkfz 10/4 makes the Flak for the 901 and 902 Pz Gren. regiments. One day I will make this figures from the available ones in the Valiant box. 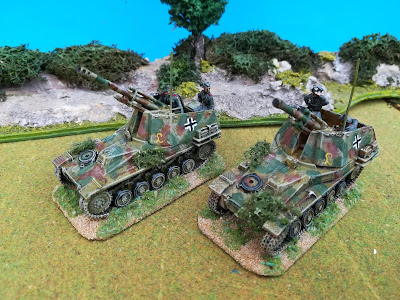 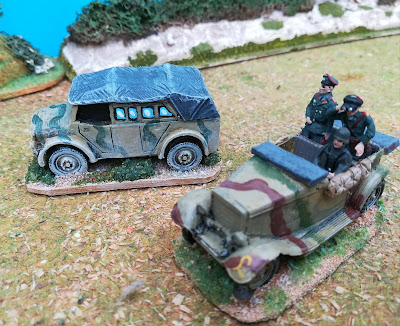 General Bayerlein watches the direction of the attack he thinks being a total mistake. But its Hitler's orders so its better to do something about it. The light car and Stoewer are Frontline Wargaming. 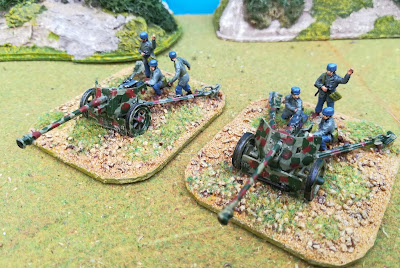 The FJ manning this Airfix Pak40 are also old Airfix and Preiser. 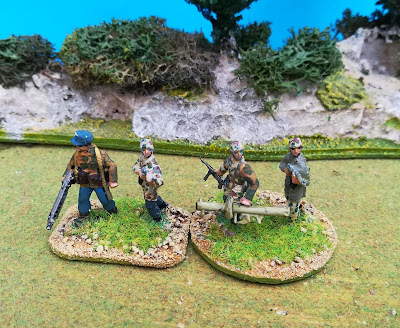 The main body of the two battalions of  FJ are Esci with a few Valiant conversions. 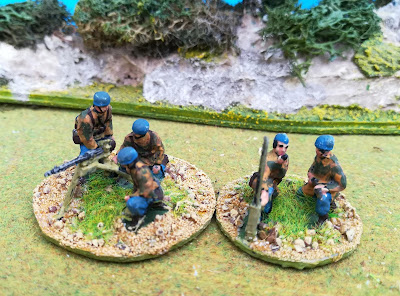 The MMG are Armourfast with Airfix heads. The Radio stand is Revell. 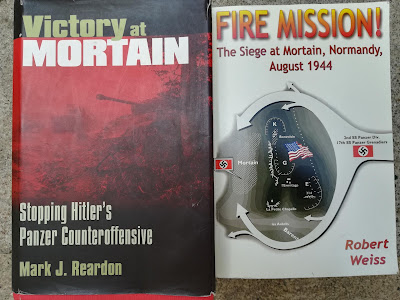 Now for some bibliography used in this series. To the right you have the Victory at Mortain book from M.J. Reardon. For me its the best account of the battles of the Mortain counteroffensive even if lacking detail on the German OB's. To the right  R. Weiss Fire Mission book centers its text on the 'lost Battalion' actions around hill 314. 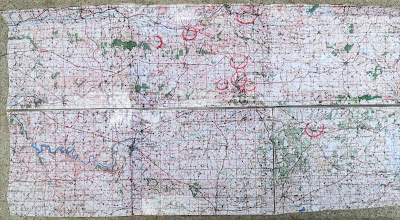 The 1947 Michelin map of Mortain is a very useful guide for the terrain were everything happened. I used this one I found in the internet. When all pages are placed like this and wrapped with tape it measures around 70cm X 40cm. 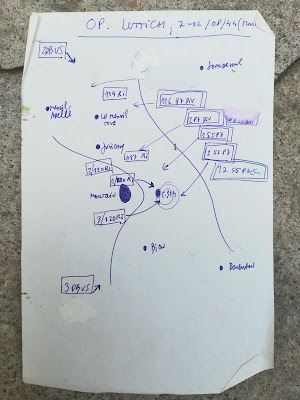 A quick map of the actions make you understand you need a table around 8 meters X 4 meters to cope with all units involved. 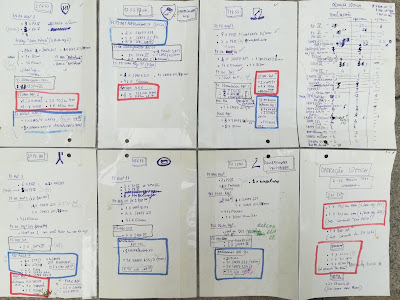 Along the years I built these helpful charts to keep a registration of all details I could find of the six big German units present at Mortain. Also wrapped in tape it was essential to add constant changes in numbers and weapons to the German lists as I was finding more references on this difficult matter and far from conclusion.

Posted by João Pedro Peixoto at 05:43