This main picture is quite anachronistic as Gen. Sykes's V Corps was spread in a much bigger area and not approching the battlefield in this manner. But in this way you can see all three division of V corps. On the far left, still on Cemetery Ridge, you have the Pennsylvania Reserves of Gen. Crawford 3rd Division; below them, close to the Slaughter Pen and Devil's Den, the 2nd Division of Gen. Ayres advances to their terrible fate at the Wheatfield, with the company of the small Col.Tilton's Brigade from 1st Division; finally, the bulk of 1st Division stands at the top of Little Round Top for its famous and decisive action of the second day. 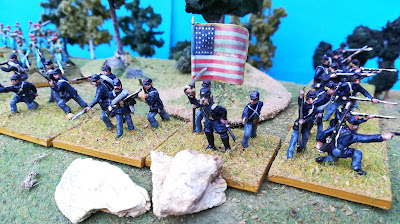 And here stands the 20th Maine with Chamberlain brandishing its sword and crying 'bayoneeeets!' to repulse Law's Alabamians. The figure is StreletsR and the rank and file is mostly Revell. This  seven stand regiment represents Vincent's 3rd Brigade. 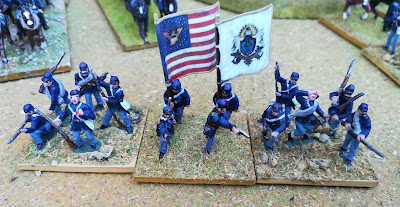 Tilton's small 1st Brigade is already on its way to the Wheatfield (and suffering casualties). The figures are Revell, ACTA, Imex and Irregular Miniatures. The flag bearers are conversions from Japanese WW2 figures. 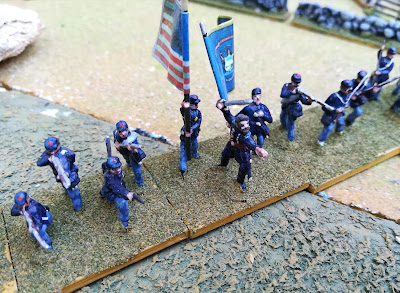 The 2nd Brigade of Col. Sweitzer is represented by the 4th Michigan with Col. Jeffords trying to take the lost colors and being mortally wounded by a bayonet, the only regimental commander to be killed in this way during the war. He could have survived if he noticed that the colours are already in the hands of his unit again as you can see here... 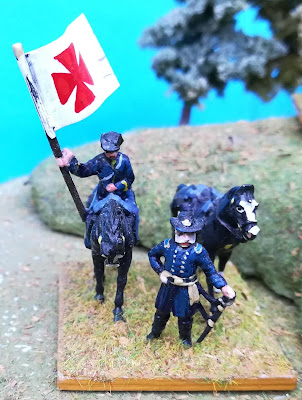 61 years old Brigadier-General James Barnes is the usual Revell body with another head to show the prominent whiskers used by 1st Division leader. 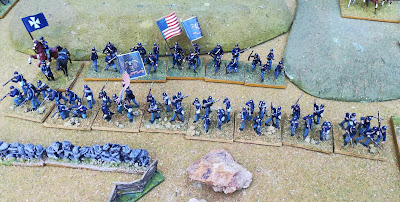 Gen. Ayres Second Division is also split with 1st and 2nd Brigades ( Day's and Burbank's, figures from the usual brands) in this picture... 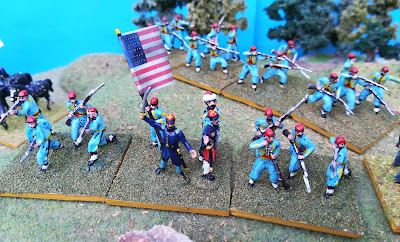 ... and to the right of Chamberlain, the 155th Pennsylvania representing  Weed's 3rd Brigade. The figures are Hat Zouaves with a wounded officer from StreletsR and another from a converted Esci figure. 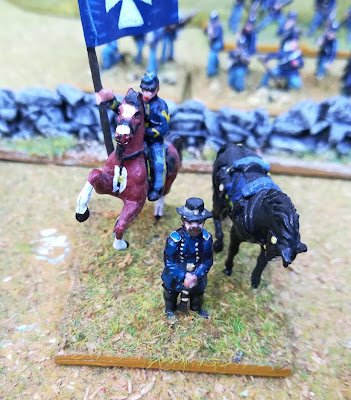 Gen. Ayres is a StreletsR figure. 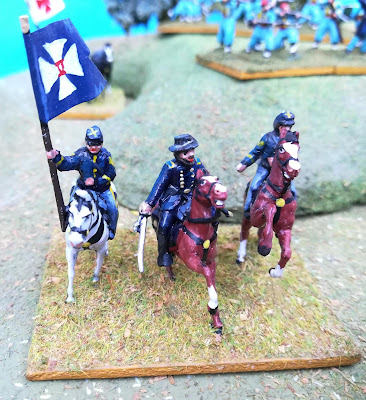 Major-General George Sykes is a conversion of Italeri parts.

The 3rd Division, the Pennsylvania Reserve Division, is here portrayed in its usual grey pants with Revell and Imex figures and StreletsR officers. Brigadier-General Crawford is at the top right corner of the picture with its long black whiskers converted from a StreletsR head pinned to a Revell body. 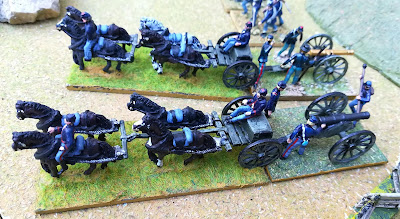 The V Corps artillery is a mixture of metal figures from Irregular Miniatures and plastics, including many conversions. 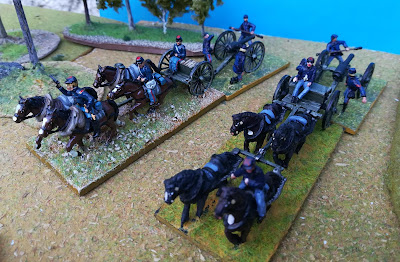 The same for these stands with converted artillery pieces to look like rifled cannons.

Next: Sedgwick's VI Corps, the Army of the Potomac.

Posted by João Pedro Peixoto at 02:08