Normally an Iraqi Corps artillery brigade has three battalions of towed guns. In Able Archer rules the 18 tubes of a battalion can be represented by 3/4 models (one represents five) so you have here a total of six battalions as the III Corps received extra battalions to support the Khafji operations. 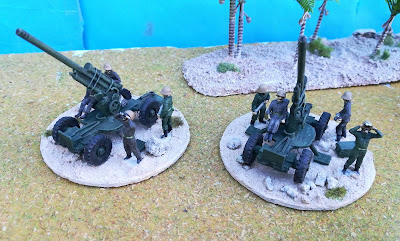 These are 85mm AA guns from Irregular Miniatures with metal Skytrex and Airfix converted gunners. 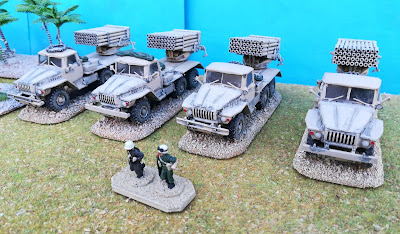 These BM-21 Grad are Modelism kits and are a very accurate depiction of the real thing. 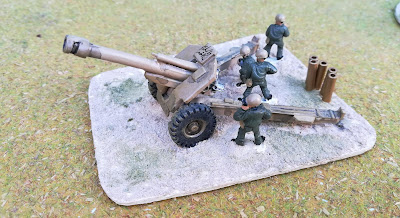 The 152mm D-1s guns and crew are Irregular Miniatures. 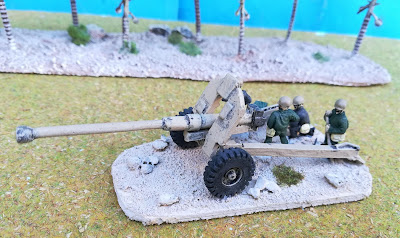 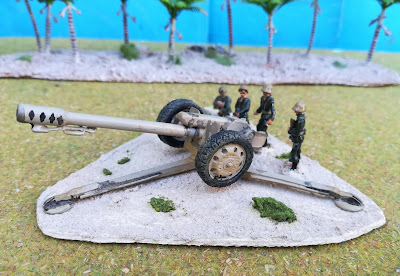 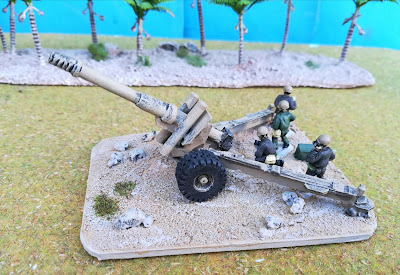 The 152mm M43/37 and crews are Irregular Miniatures and have shields and gun suspensions made in plastic. 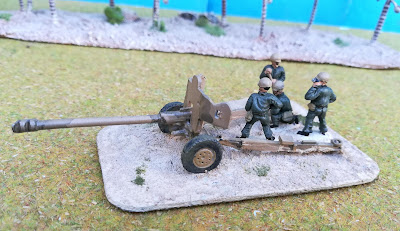 The 85mm AT gun D-44 and crew are more Irregular Miniatures. 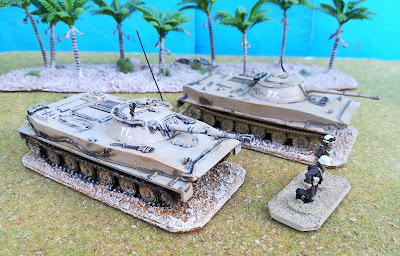 The closest PT-76 is a repainted Altaya and the other one is Skytrex both for a Corps reconnaissance unit.

This is the last big post on the subject as the material of the Iraqi Army is somehow covered.

What do I have for the Iraqi RF!/Able Archer:
- the 3rd Saladin Armoured  Division;
- the 5th Mohammed Al-Kasim Mechanized Division.
- the Corps support.

What is still missing:
- Straight Flush control and radar vehicles for the SAM-6  batteries (I'll go BPM for these).
- Three more K-63 for the missing battalion of the 5th MD (probably S&S models).
- Command BTR-50PU for the Recce battalion of the 5th MD (one ACE model on the table but not a big will to build it).
- Towing trucks for the Corps artillery (not easy these ones).
- A few BMP-2 for the Republican Guard as I only have one and also a few AMX 10P for the same units (probably BPM)
- Two more infantry battalions (have five for the 3rd Saladin but need a total of seven for the 5th MD; need to find Arab modern Infantry, hoping to be Caesar).
- A few Mig-21/23/27/29 plastic kits boxed/semi-built, Die-cast on the shelves to be finished or repainted.

Posted by João Pedro Peixoto at 06:37