Rapid Fire! France 1940 in 20mm - The transport vehicles of the Dragons Portés of the 5e DLC (Part1) 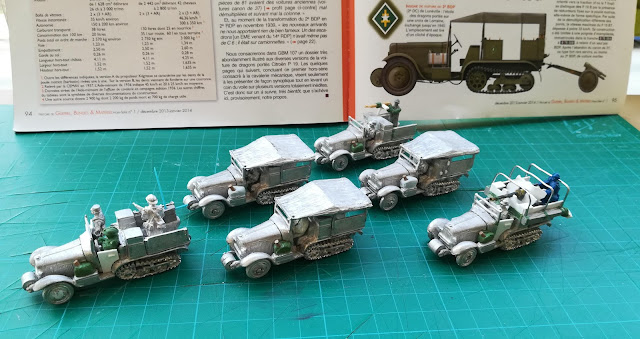 These P19 HT are from EWM and are intended to be the transport for the 1st battalion of the 15th Motorised Dragoon Regiment (of course I could say this unit's name in French but I don't want to impress you that much).
EWM produces two conversions of the P19, the fusilier vehicle and the staff vehicle. In the GBM magazine, the main source for France 1940 equipment, none of these staff vehicle shows up, so I will use six standard P19 for the whole battalion with four conversions. 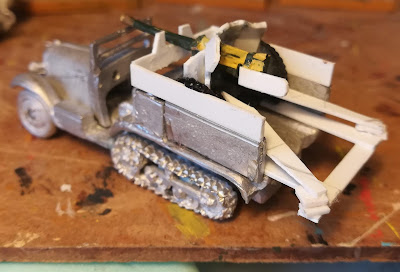 Starting with the support squadron, one of the P19 was used to carry the Hotchkiss 25mm AT gun. In fact the 5e DLC didn't convert any of their P19's to the Portee version and kept on towing the AT guns. The problem is that after looking at their pictures you just have to have one of them! 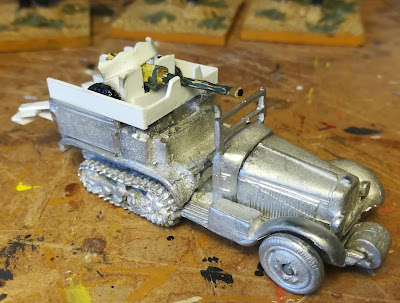 A plastic card structure was built for the gun and I tried to insert a Lancer 25mm gun inside but it just didn't fit. So I decided to scratch build one. I used a very old EKO 1/87th German 37mm gun as base and made the double mantlet out of Evergreen plastic card. The wheels came from some Chinese toys I had around as they are almost invisible inside the vehicle and will be covered by the crew. 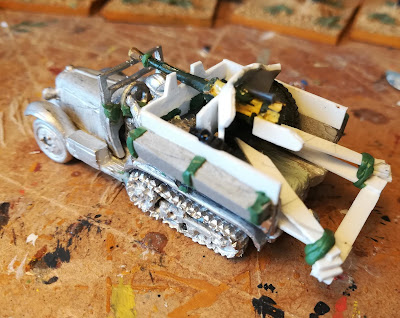 Then some rectangular hard foam structures were added to the sides to serve as the descending beams for the gun and also the rear part of the gun and supporting structure was added. 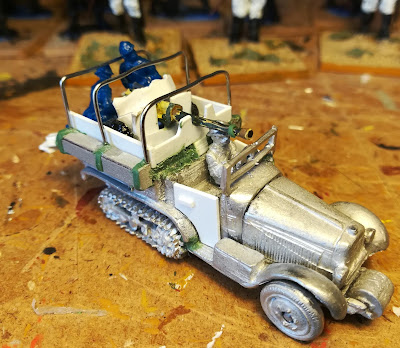 Finally some Hat artillerymen were added as well as the driver. Also plastic card doors were glued in order to have the P19B version were these changes were made. 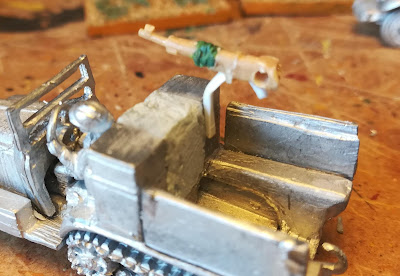 The P19 Voiture Mitrailleuse (See? What do you say about my French, hmm?) has some changes from the original. The two boxes behind the driver were united with two paste component and an Hotchkiss MG was added. For the MG I used a 37mm gun leftover from an S-Model French tank as a starting point, changed the barrel, drilled a hole for the handler and used a bit of GreenStuff for the bumper in the middle of the gun. 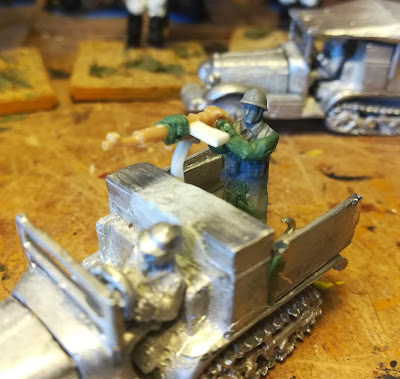 The MG firer is again the same Caesar figure with new arms I used with the Laffly S20's.  The door handlers to access the other MG parts are now already in position but skipped the photograph. 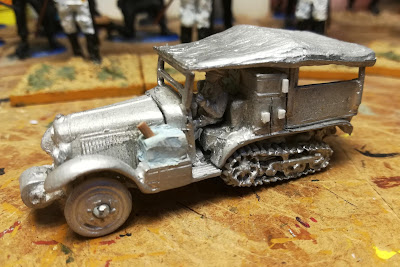 This is the mortar version. Basically the same as the MG version with connected boxes and door handlers to access the mortar and ammunition. 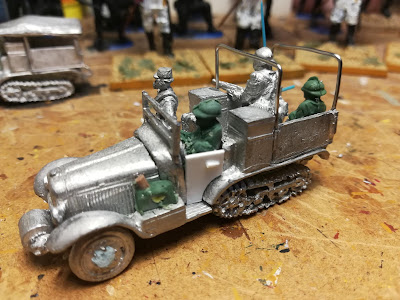 The command vehicle of the battalion could  very well be a Laffly S20 but I want to concentrate those on the DLM. Another normal P19 was used, a radio and doors were added as the P19B was used mostly in the command sections, some wire made the canvas armature and an Irregular Miniature French officer became the unit's commander.

Another addition was the exhaust added with GreenSuff to the right front side in all vehicles. 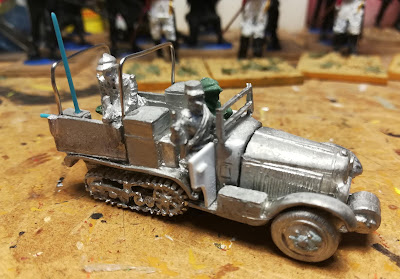 A few drivers had to be copied in GreenStuff as sometimes EWM forgets some parts. Well, nothing that we can't live without, besides EWM makes a great job on covering the first few years of the war and many other periods. By the way they just realeased  Ardennes 44 German Infantry and they look great.

Next: whether the infantry figures for the Dragons Portés, the vehicles for its 2nd battalion or the start of the Iraqi 5th Mech. Division for the 1991 Gulf War.

Posted by João Pedro Peixoto at 14:13