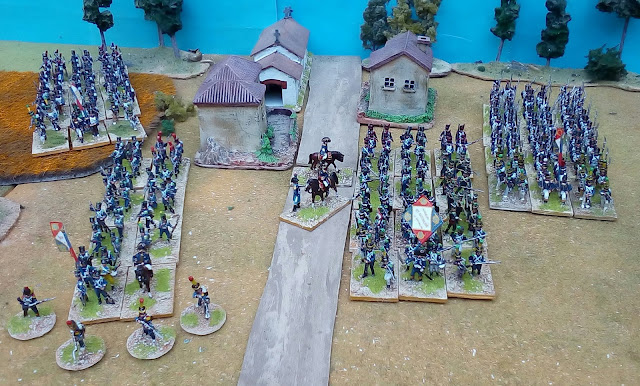 In part 2 you can see Heudelet's Division (Foy's Brigade to the left and Arnoud's to the right) marching through Santo António do Cântaro to attack the Pass Road. Once again this division is a mixture of brands and conversions. 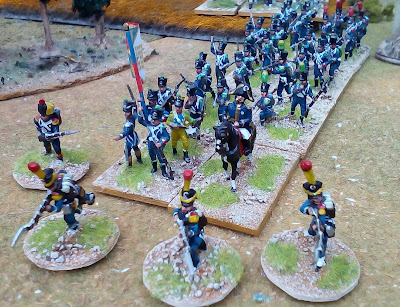 Here General Foy leads its 17th Leger up hill after having its ears heated up by Reynier only to be wounded a few minutes later. The figures are mostly Italeri 1st box of French with Foy being made from at least four different figures.

I also built and painted a large number of Voltigeurs. AoE is a brigade level game and no Voltigeurs are used but like this I can use them in other sets of rules. The ones showned here (L-R) are Zvezda with Airfix head, Hat, Zvezda and Hat again. 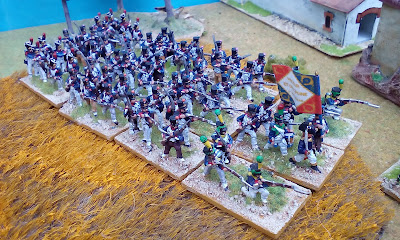 The 70e de Ligne is an all Hat unit from their lovely 100 figures box. As usual, with my childhood fears of having to divide parcels in the local toys shops with other costumers due to the small number of toys available, I amassed a large number of these Hat boxes. And this time I don't regret it as Hat apparently had plans to put an end to its production and replace them by a number of different boxes. L'argent oblige ... 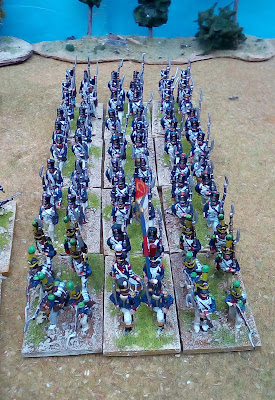 Now to Arnould's Brigade. The 47e de Ligne is another lovely Hat unit. 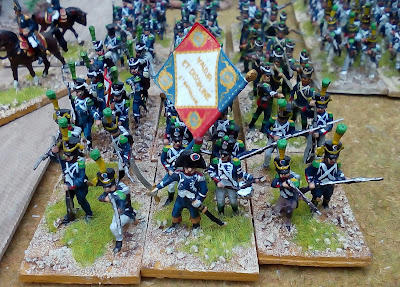 The 31e Léger is a mix of Esci, Zvezda but mainly Airfix and Esci Grenadier bodies with Esci and Zvezda shakoes. The officer is from Italeri 2nd set of French Infantry. 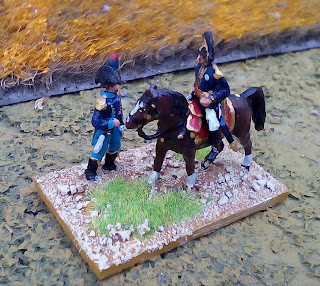 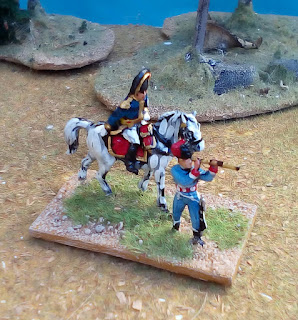 To the left you can see the true General Heudelet. The figure is the old Airfix AWI officer with a new head from Strelets R and sash and epaulettes made out from GreenStuff. The ADC is Italeri. To the right you have agin General Merle that by mistake shows up in the big picture of Heudelet's Division. Well, at least is a new picture were you can see the extra details in GreenStuff placed in both figures. This mistake only proves the amateurish side of this fantastic blog of yours that, yes I know, looks very professional but in fact becomes very crappy once in a while... 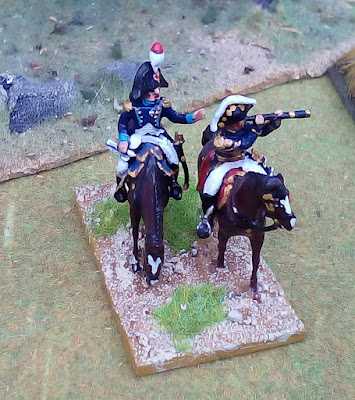 Finally General Reynier itself and ADC with added plumes in  GreenStuff. For the Brigade commanders AoE recommends one horse figure; for Division, one horse and one foot figure and for Corps, two horse figures.

Posted by João Pedro Peixoto at 05:32