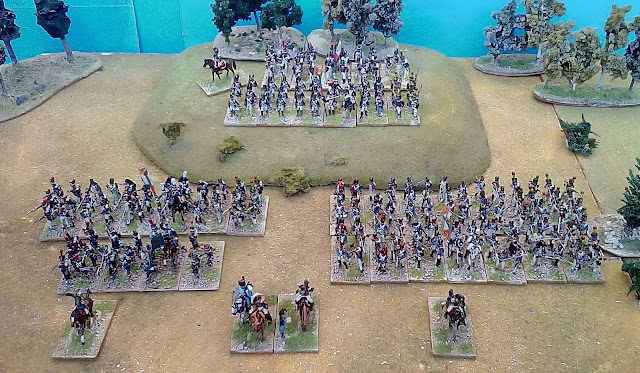 The 8th Corps of General Junot was kept in reserve for the length of the battle. To the front you can see Taupin's and Godart's Brigades and to the back, Ménard's. I opted here to represent only two regiments per brigade and expanding them to the size of the full brigades, otherwise each regiment would be represented by an average of three stands as this Division had mostly the 4th battalion of each regiment. 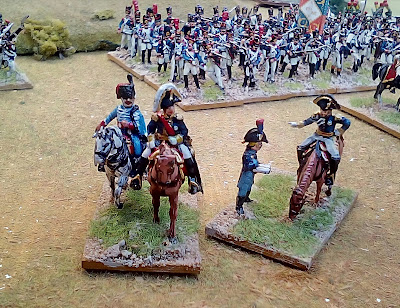 The veteran leader of the 1st Invasion of Portugal, Jean-Andoche Junot, the Corps commander can be seen here to the left. The basis of its model is an Italeri General from the Austrian and Russian command set. A few additions were made in GreenStuff and here is Junot probably cursing Massena for leaving him out of the battle. The ADC is Italeri. 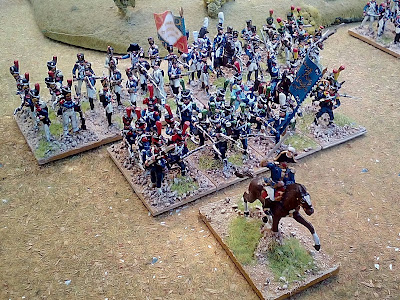 Led by the 15e Legére here comes Taupin's Brigade. The General itself is the mounted Airfix French officer. With a sash and new head it was easily promoted to General!

The 15e Legére is a full Zvezda unit. Not the same for the rear ranks, the 46th de Ligne, with figures from Hat and Zvezda (elite companies), Italeri 1st and 2nd box, some Italeri veterans with bicorne from the 1805 set, and a mounted officer from Waterloo1815. 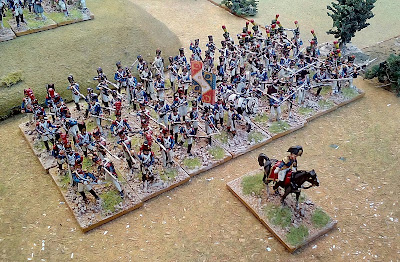 One of the largest regiment of the Armée du Portugal was the 22e de Ligne with four battalons that on its own constituted the full Godart Brigade.
The regiment is made of Italeri, converted Esci and a few Hat and Ykreol as Voltigeurs. 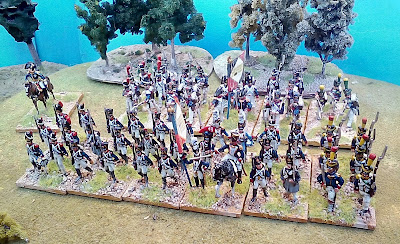 Ménard's Brigade has, to the front, the 19e de Ligne, with plenty of Esci and Italeri figures and a few Hat. To the back stands the 28e de Ligne with mostly Hat and a few Italeri. In this brigade I also included some sappers from Esci in the regimental command stands. 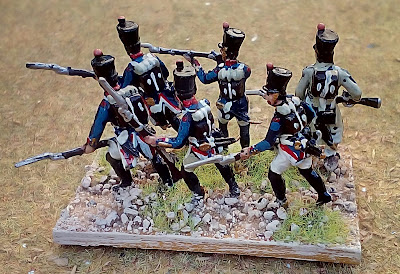 The converted Esci figures I was talking about are the kind you can see in the first row of this stand. I took out the tail of the short coat (yes, those famous ones that left many people sad when opening the boxes in the 80s - Damn, these guys are not Line!!) with an X-acto and glued the longer tails of the Esci and Airfix Grenadiers. Like this I managed to use a few dozens of the Esci 'Line' infantry, otherwise only useful for a very few number of Guard units.

Posted by João Pedro Peixoto at 05:50