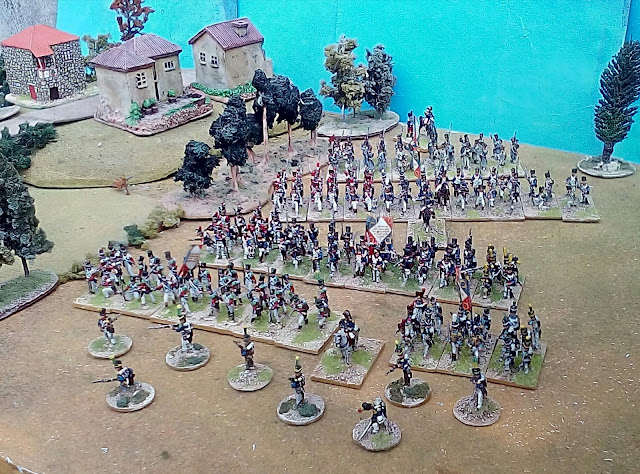 Loison's Division after beating the Caçadores and British lights out of Sula Village turns left to face the British and Portuguese line infantry and artillery posted below the Bussaco convent walls... 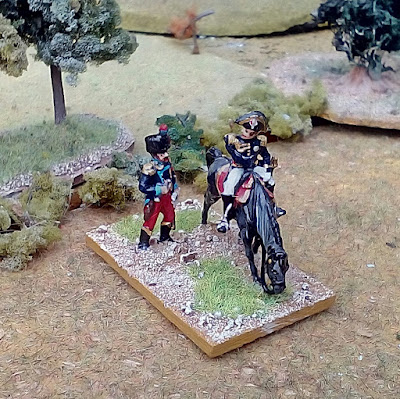 Loison was one of those characters of the Napoleonic days. In Portugal he got a very bad name for a number of mass killings in places like Évora and Coimbra and plundering everywhere he went. As he lost one hand in an accident he was known here as the Maneta (one-hand person). Even today when  someone dies we say 'Foi para o Maneta' (he went to the one-hand).

I scratch built the ruined arm of Loison by cutting the right  arm of this Italeri figure and replacing it with a piece of GreenStuff.

The 66e de Ligne of Ferrey's Brigade has Grenadiers from Hat, Fusiliers from Hat and Italeri and Voltigeurs from Esci with Airfix Hussar heads. The mounted officer comes from the nice but stupidly expensive Waterloo1815 Napoleonic Line Mounted Officers.

The 82e de Ligne (also Ferrey's) is Hat and Ykreol. This unit should only be 6 stands as this regiment had 1236 men but I added two more instead of building the small 2 stand of the 2nd battalion of the 32e Legére (413 men) of this Brigade.

My favourite unit in Loison's Division is the Légion Hanovrienne from Simon's Brigade. The figures are mostly conversions using Esci and Airfix Grenadier bodies with Esci shakos. The Voltigeurs are Zvezda. 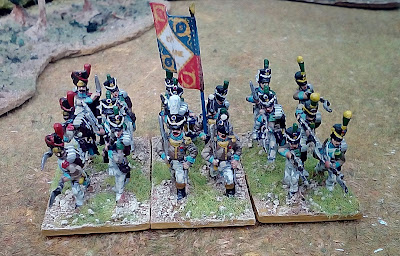 Small but with a nice brown habit comes the Légion du Midi. 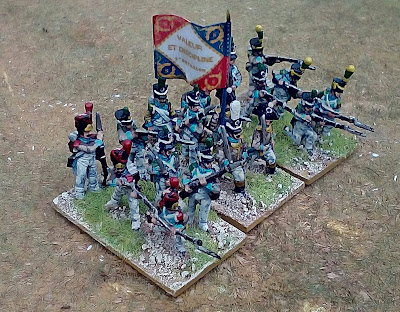 All figures are Hat from three different boxes.

Last from Simon's Brigade is the 26e de ligne from the Hat coated French infantry box. I couldn't find any proof of the French still using in 1810 the white linen overcoat they used in the 1808 invasion of Portugal (Roliça and Vimeiro) so I painted the overcoats grey-blue and dark yellow as usual in the French Infantry. 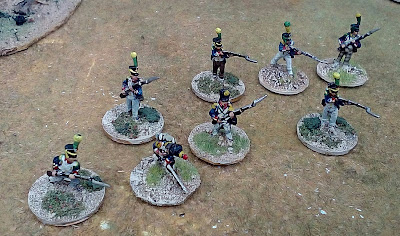 The Voltigeurs forming in front of the Division are a mixture of Hat and Ykreol. I use for their basing 1 euro coins... made of plastic and from superstores.

Posted by João Pedro Peixoto at 12:59