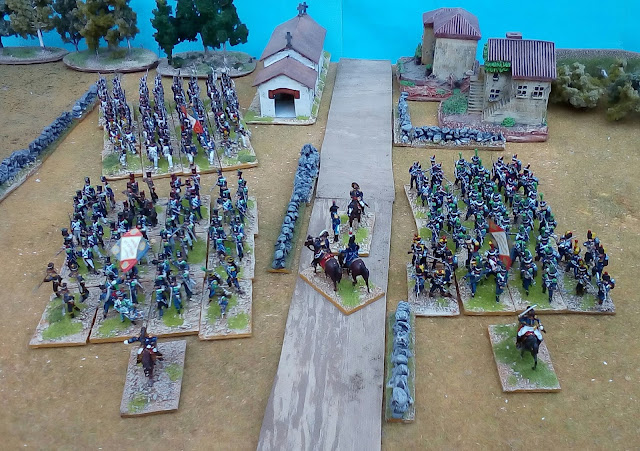 The battle of Bussaco (in fact it should be written Buçaco, but to make foreign spelling easier the name has been changed) was the biggest battle ever fought in Portuguese soil with over 110.000 men in action. It happened on the 27th September 1810, during the third invasion of Portugal, when Massena's Armée du Portugal, 64.000 men strong, attacked the Anglo-Portuguese  army of 52.000 men on top of a very steep mountain 14km long called Serra do Bussaco, 20km from my town, Coimbra. The attacked was made by Reynier's 2nd Corps, from the village of Santo António do Cântaro, and Ney's 6th Corps, from the village of Sula. The former should sweep the enemy from the top of the ridge and meet with the latter close to the Monastery.
Things went awfully wrong for the brave French and after over 4000 casualties and the biggest casualty rate in officers of all battles of the Napoleonic wars, the French withdraw to the valley leaving the victorious enemy on its original defensive positions for an extra day.

This will be another long series, with around 20 posts as I have all figures already made to represent the entire campaign. It will also be quick, maybe one post each two days, so hurry up writing comments (good ones) before you are out of fashion!
I used Age of Eagles rules for this campaign but instead of one stand for each 360/180 infantrymen/cavalrymen I used one stand representing 200/100 infantrymen/cavalrymen. I used also three rows of two men each per stand to simulate the French battle line.
The division showned here is Merle's 1st Division of Reynier's 2nd Corps leaving the village of Pendurada in order to join the Santo António do Cântaro attack. It had two Brigades, Sarrut's (Left on the Picture) and Graindorge's brigade (Right). 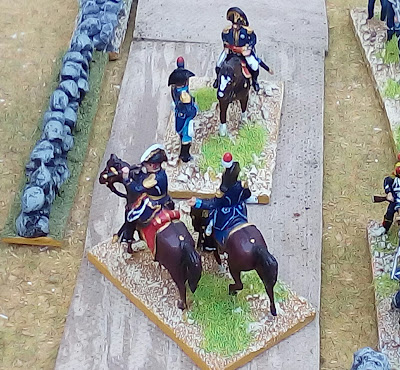 With two men on horse you have a Corps Command stand in this case the obvious General Reynier and its ADC. The other stand with one figure on foot is the Divisional command stand, General Merle. All figures comes from the Italeri French Command and Staff box, only Merle is the officer figure of Revell's Grenadiers. 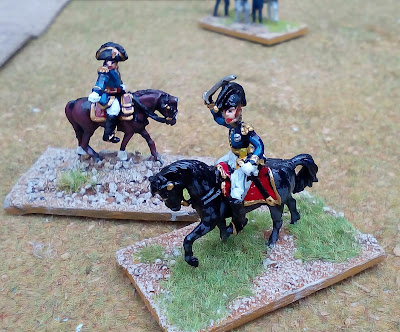 The two Brigade commanders are (L) an Irregular Miniatures figure and (R) a conversion based on an Italeri torso from Esci's Scots Grey, horse and legs from Italeri and head from Strelets R. 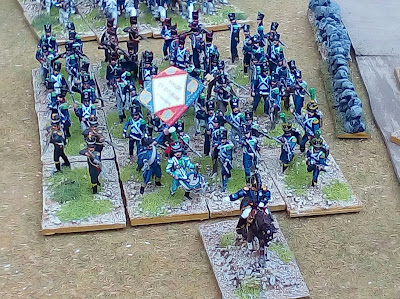 The 2e Léger follows Sarrut. The figures are mostly conversions with some Esci and Zvezda in the flank companies. 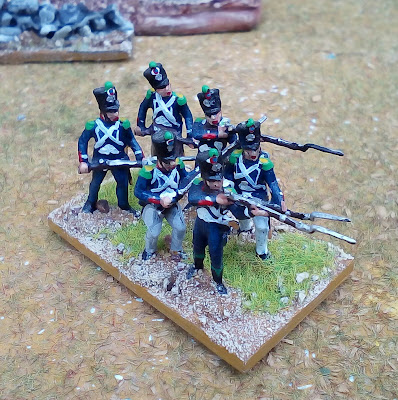 The 2e Léger conversions are based on the bodies of Esci Grenadiers with Esci line heads. 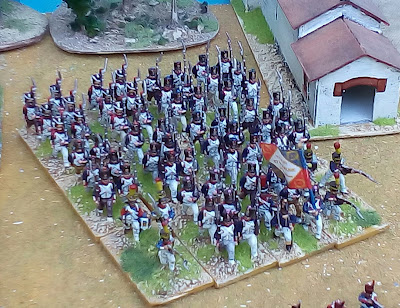 The 36e de Ligne is an all Hat regiment with figures from its 100 figures box unfortunately out of production. 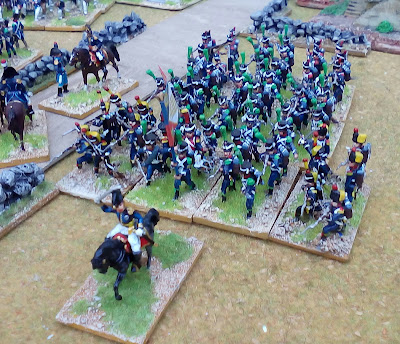 Graindorge's Brigade only had one Regiment, the 4e Léger, but very big, four battalions strong. 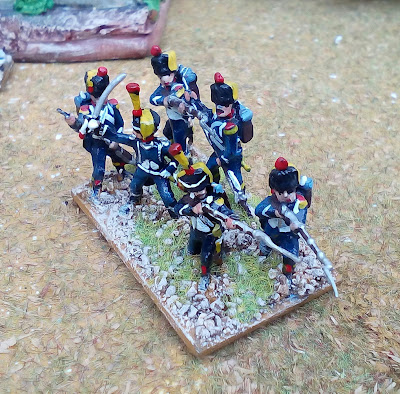 The Voltigeurs stands are a mix of Hat Voltigeurs and Zvezda figures with Airfix Hussar heads.

Posted by João Pedro Peixoto at 12:49