Rapid Fire! France 1940 in 20mm - The figures of the 2nd KRRC Motor Battalion 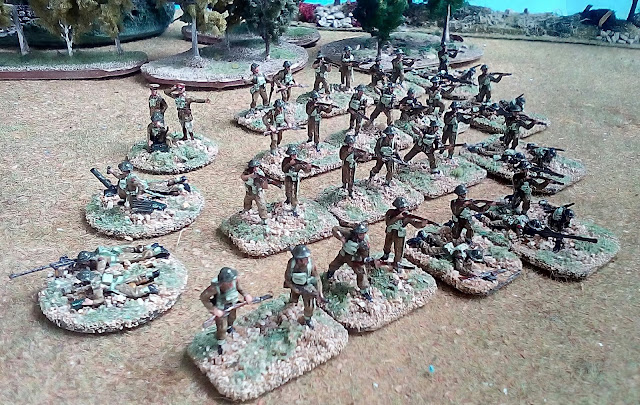 With all transport done for the 30th Brigade, the 2nd KRRC figures were made in the last few days. The main issue here was the obvious temptation to use the figures you already have for the 1944-45 period maybe with a few extra Boys ATR's. The problem is that the equipment of 1944, based on the 1937 Pattern Web Equipment, was the same as the one of the BEF infantry in 1940 with a big difference; the gas mask bag which makes the British soldier of 1940 quite different from the one of 1944 (besides new Helmets and new SMG`s, PIAT's and other pieces of equipment introduced after 1940).

So, what figures to use for these conversions?
- I have stocks of  classic Airfix and Matchbox, detailed figures, plain helmets but a bit too small (around 1/76th ) to go with the HAT figures I used for its transport Carriers and CS8's.
- Also a stock of big Valiant boxes could be used but by far not enough plain helmets as these figures were made with  Normandy in mind.
-I ended up by using the Esci British infantry with a few Airfix figures; WW1 Emhar British; Australian Revell and a few Matchbox for certain positions. All of them got a two component paste gas mask bag and a back pack were they didn't exist. Some of the Revell's Australians have the old Service Dress instead of the newer Battle Dress, which is correct as there was resistance to this change in the British army, one Guards officer saying it looked like a "third rate chauffeur" dress.

The HQ figures painted and ready to fight the Jerry's. The Boys ATR are extras sent to me by 3d Minigeneral boss, Pedro Pato. 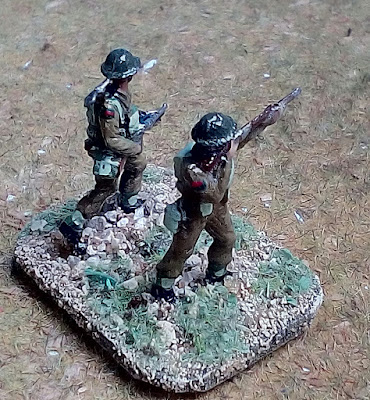 All 2nd KRRC figures got the green and red shoulder title they used in WWII. The SMG's are a later Thompson model but I left it as it was as any change in such a small  weapon would be too complicated.

The company's Boys ATR got an inverted T as support, and an Airfix lying figure next to it. They are ready to defend Calais up to the last man! Or better, to go along the Southern counter-attack of the tank brigades even if not historical...

Posted by João Pedro Peixoto at 09:10