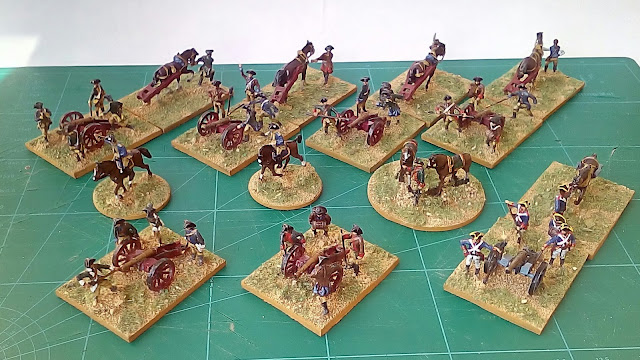 While looking for something else in my basement I found a box of primed and based stands for AWI. I made them some 2 or 3 years ago and this time of less work is an opportunity to reduce the stash. When I left Brandywine I only have to make for the British the Vaughn and Leslie's Brigades, two regiments of Hessians, the  three squadrons of cavalry and six artillery pieces (batteries). For the American side the situation was worse with  seven brigades missing and six batteries. Also a number of command stands are still missing for both sides. With this post at least the American artillery for Brandywine 1777 is finished.

As usual the figures will be mostly Revell and Airfix with converted Airfix limbers.

All the American artillery stands have pre-1179 uniforms so no blue and red for Continental Artillery but green, black and brown with various and made up facings. Figures are from three sets, two from Revell and one from Airfix. The limber is the body of the Airfix Napoleonic French gun stretched, burned and bent to look like a 3pdr AWI limber. 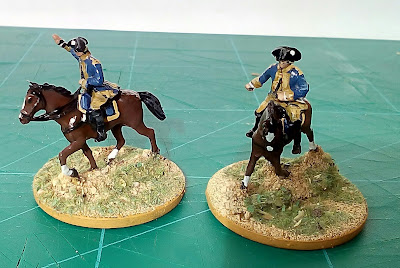 Two more Brigade commanders for the American made from the Revell Austrian Train Drivers. 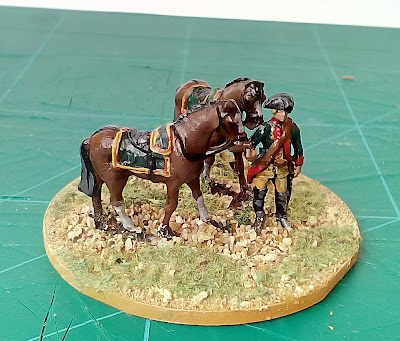 Finally a Horse Holder stand for the Hessian Jaegers. The figure is Revell Austrian Artillery and the horses are from the Revell British Napoleonic infantry set.

Next: I don´t know but it won't take long.

Posted by João Pedro Peixoto at 10:35