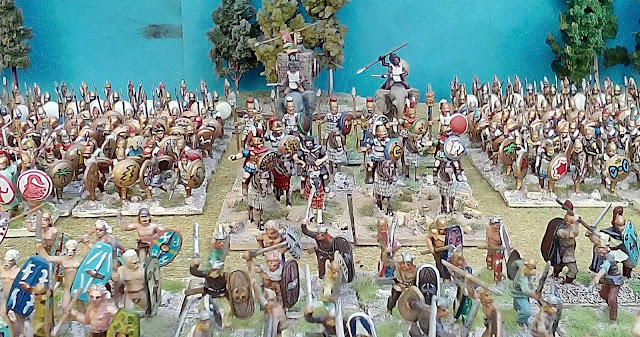 I made this army along several years and finished my last group of gallic warriors some weeks ago. I tried to keep the same style of painting and basing but many subtle changes happenned. In the end of more than 1000 figures it is one of my favourites adventures into this crazy idea of mine of building full historical wargaming armies to set them quietly in the shelves.

The powerful Cartaginian army of Hannibal Barca arrives at the plain of Cannae and prepares to follow Hannibal's orders for forming a large convex bow in front of the Roman army tpo absorb its impact... 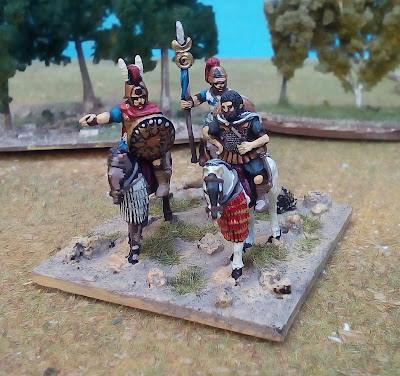 Hannibal mounted on his brave Belleus. Next to him is Maharbal, Hannibal's 2IC. The army's command stand is Newline Designs. 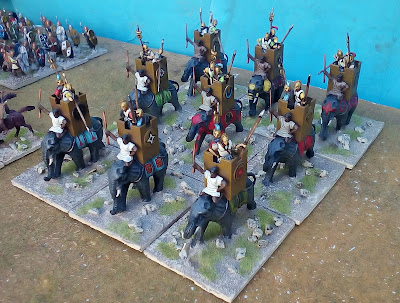 Not at Cannae, of course, but needed elsewhere namely at Zama, follows a group of Hat elephants. 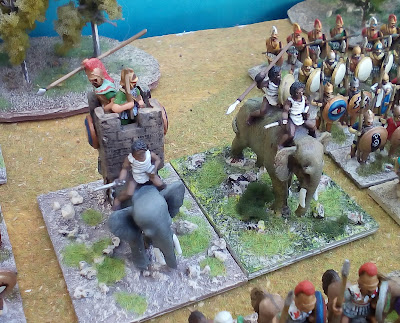 Protecting the back of Hannibal itself , two Newline Designs stands of elephants in a not very favourable position for the spearmen in front...

Here, Hannibal is surrounded by his faithful Liby-Phoenician phalanxes. Later in the battle, these two groups will be placed in both ends of the battle line, and they will be crucial to defeat the bottlenecked Roman legions in a pincer movement. 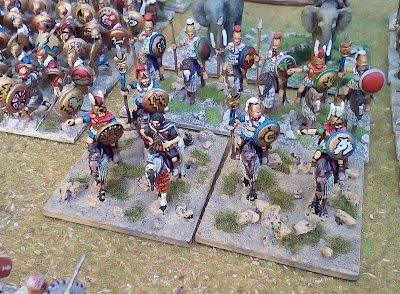 Hannibal and his Citizen Cavalry bodyguards. 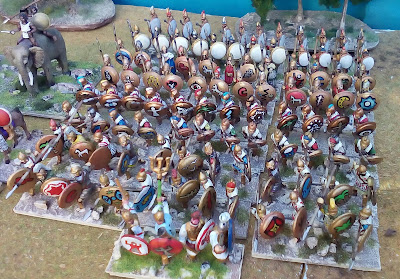 The left wing phalanx. The phalanxes are made mainly of Newline Designs figures but the front ranks also have some Hat miniatures. Every single shield is a different design making these units slow painting groups. In the end I even went to the Lybian ministery of tourism site to find some extra designs!
All other ethnical groupos are the same regarding shields: only the Numidians figures have more or less the same pattern, all other, Spanish, Gauls, Carthaginians have different shield designs. So some 900 different patterns. The good thing was that this army was made along several years, interchanging modelling with other periods of history, otherwise I would be in a loony house. 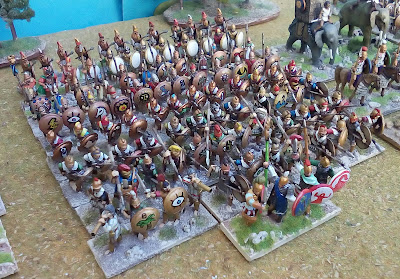 The right wing phalanx. Both command stands are Hat miniatures. 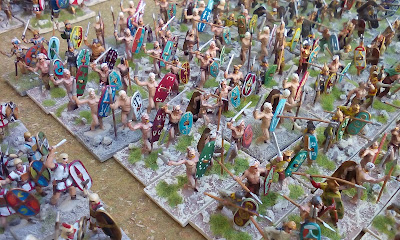 The biggest group in the Carthaginian army were the Gauls, recruited when Hannibal made his journey from Hispania to Italy.
Here you can see Revell, Italeri, Newline Designs and Airfix all mixed in. 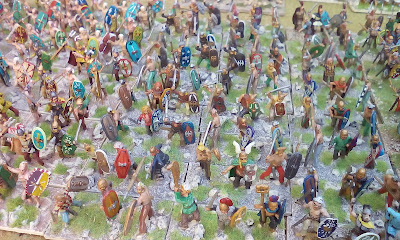 Having a large contingent of Gaul figures is very helpful as they were long lasting enemies of the Romans. 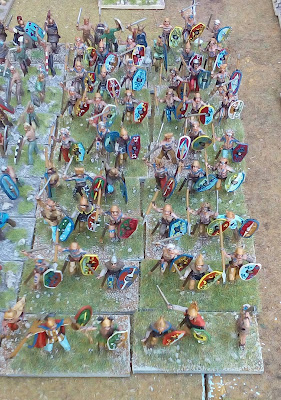 This group was the last to be painted and includes some blue tattoed bodies.

Gallic Cavalry. Again many Italeri, Hat and Newline Designs. Whenever I can I have a metal figure at least per stand to make it heavier and more varied. 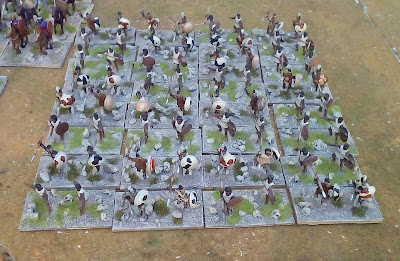 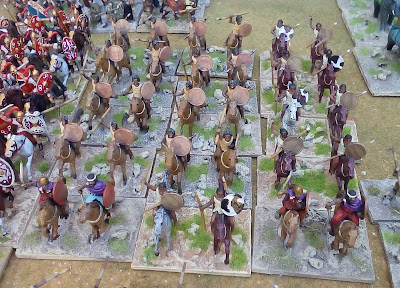 Numidian cavalry made out from the usual Hat and Newline Designs. I placed two commanders in  different stands anticipating Zama when there were rival contingents of Numidians in the battlefield. 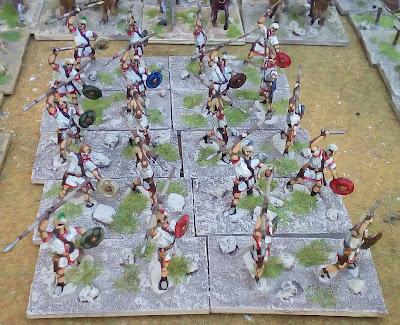 The Spanish Caetrati are all Hat miniatures. 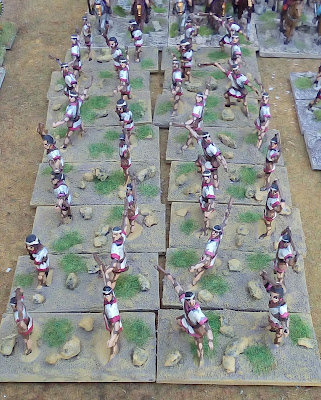 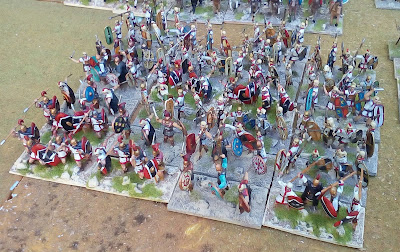 Spanish Scutarii. These came from the two boxes of Hat miniaturers that contemplates these longlasting enemies of Rome. 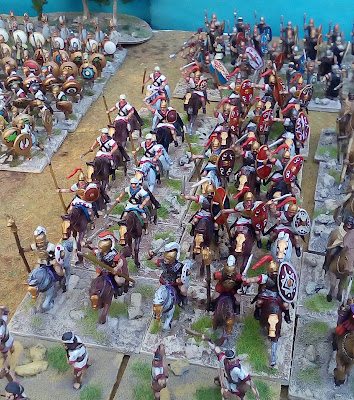 "Round shield" and "Long shield" spanish Cavalry. The command satnds are Newline Designs and the rest is Hat miniatures. 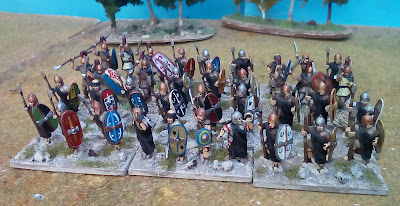 Celtiberian spearmen. Mostly are Newline Designs with some three stands of Hat Miniatures. 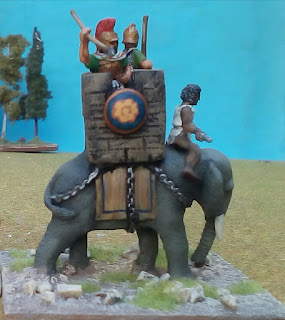 The Newline Designs miniatures paint extremely well and the figures are detailed and very well proportioned.


Next: Houses for Normandy, made in China and repainted in Portugal.
Posted by João Pedro Peixoto at 14:17