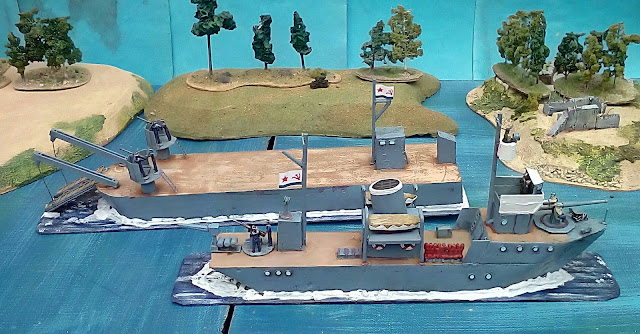 The landings of the 255th Naval Infantry Brigade and of the 563rd Independent Tank Battalion at South Ozereika, February 1943, became famous in Russian military history not only by the courage and sacrifice of the attacking forces but also by the way it failed. Like Dieppe, this landing is taught in the Russian military academies as a way NOT to perform an amphibious landing.
This time, while coming back to Rapid Fire! light blue book ("Bavarian blue" as a Napoleonic buff would say), also known as the third supplement, I was hooked by the tasty VI page were you can see the bow of a large landing craft in the Ozereika landings.Years ago a lot of time was lost trying to find precise information about Russian landing craft only to come empty handed. Probably there was plenty of material in Russian language but nothing in English and much less in Portuguese. Nowadays much more information exists and I strongly recommend the site Engines of the Red Army made by Oliver, a fantastic artist and researcher. Here is the link for this particular operation:   https://www.o5m6.de/redarmy/m3a1_osereika.php
Regarding Ozereika I found in the stash a KP PO-2 aircraft, an ICM TB-3, Hat Romanians and Pegasus Russian naval infantry. But the main attraction for me are the landing craft and support vessels. So, more scratch building on the way! Besides who can resist Russian naval infantry carried in Swedish barges with US made tanks fighting Romanians and German Jägers? I can't for sure. 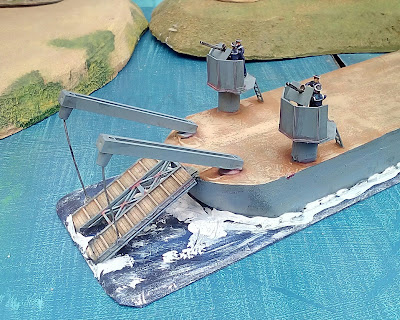 Three old Bolinders, old barges from Czarist era, were used to transport 30 M3A1 light tanks and a few trucks.  These old barges were one of the reasons for the failure of the operation as they were slow and hard to maneuver (the original Bolinders engines were finished) and they had to be towed by minesweepers and then, closer to the beach, by smaller tows. 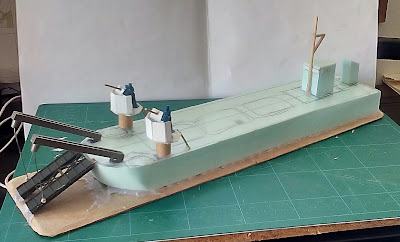 Blueboard was used for all major structures and wood and plastic for the smaller ones. The size of the real thing should have been 1 meter long but the model was kept at 45cm, enough to carry 3 tanks and 1 truck.

This is the aim (picture taken from Engines of the Red Army blog). 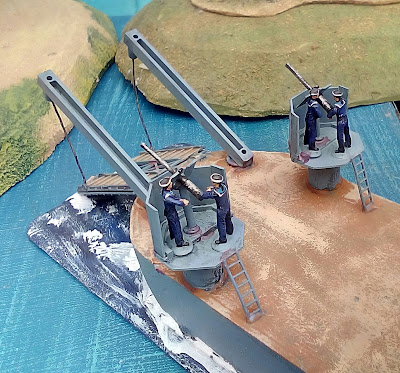 The bow of the Bolinder is equipped with two scratch built AA guns. The ramp on the bridge was built with parts from the Matchbox AVRE Churchill. 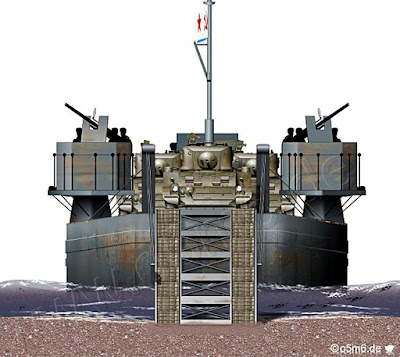 The correct waving shape of bow and stern was kept aside for speed of construction. The image is taken from the blog Engines of the Red Army. 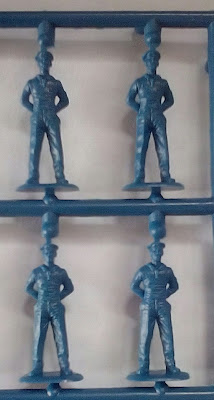 The Soviet sailors came from the Revell box of Kriegsmarine as the uniforms are very similar. The arms were carefully cut out and placed in a way it looks they are manning the guns. 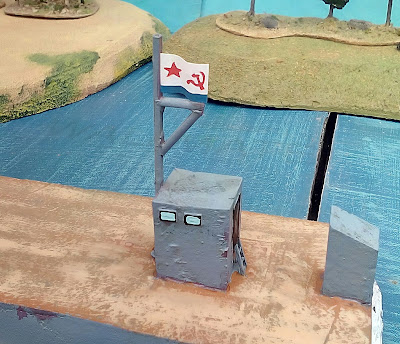 The stern of the boat was reduced to a minimum of details as I couldn't find much information. 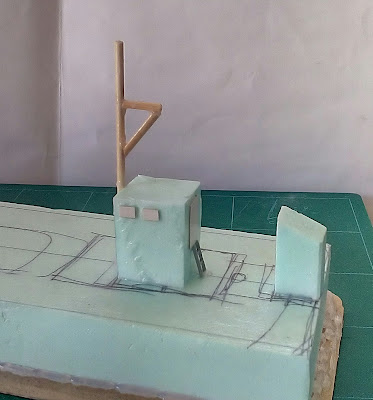 All masts mast are barbecue sticks. Doors and windows are card. 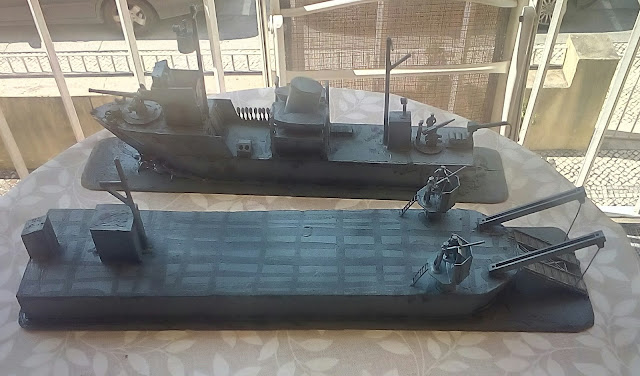 The ready lot. All Blueboard parts took two layers of PVA glue for it to cope with the acrylic primer spray. After the primer Vallejo Blue Grey was dry brushed all over. 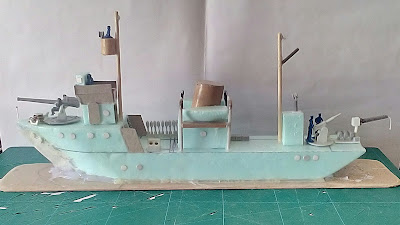 The Bolinder number 6 was towed by the minesweeper T-412 "Areseny Rasskin". 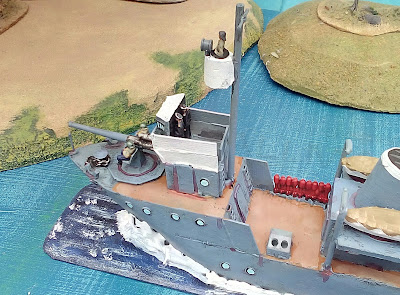 The final model is no more than a caricature of the true boat. Over 1 meter was necessary to represent the real thing while this model is 35cm. This last lenght is an obvious compromise when you need a gun, a control tower, a chimney, vacant places for naval infantry and depth charges all in the same model. 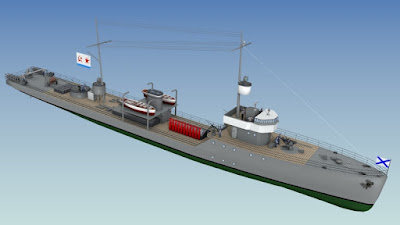 This is a correct model with the elegant lines, albeit in a smaller scale,  of a Fugas class minesweeper. 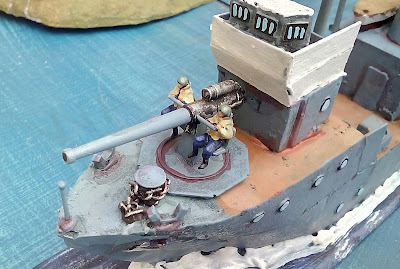 One of the reasons to build a Russian minesweeper is that Master Richard in his Bavarian blue book mentions a "102mm gun" from a destroyer as support. This model can be used both as a Bolinder tow and as a support weapon. The gun came from the Matchbox Corvette and the artillerymen from the Tamiya modern torpedo boat. 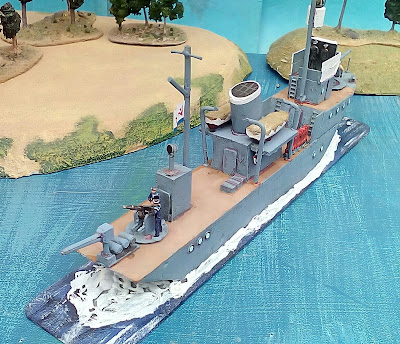 Much of the deck is free of details for several stands of infantry to fit in. 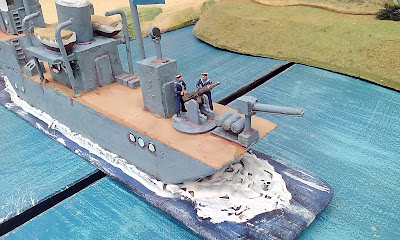 A few more Revell conversions were used to man the 37mm AA guns at the stern. 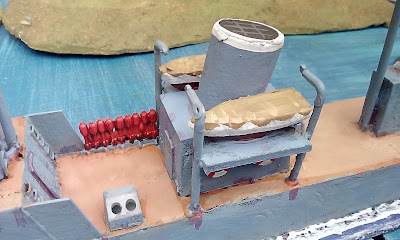 The lifeboats are Blueboard, other parts came from the Matchbox Corvette, the stairs are Airfix from the Commandos box and the flags are hand painted.

A few more pictures as my English is finished for  now!... 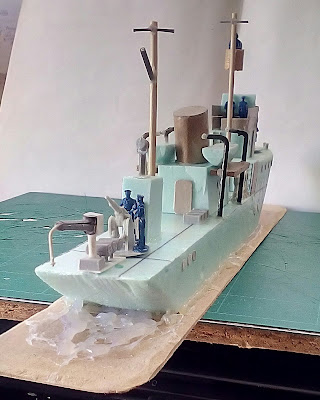 Next: Part 2 of the South Ozereika landings.
Posted by João Pedro Peixoto at 14:40