Rapid Fire! Conclusion of the 26th VGD in Bastogne - The Intriguing Feldersatz Battalion 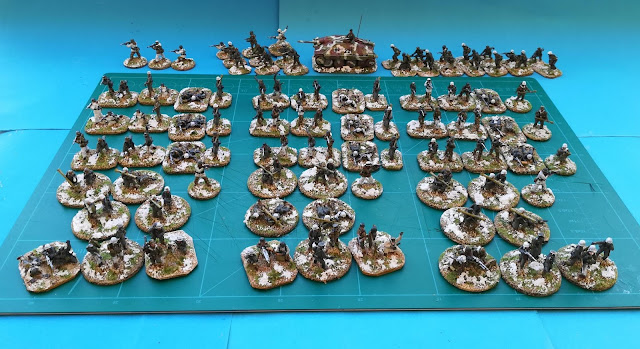 Years ago I built a Volksgrenadier division according to its six battalion/ three Regiment structure and obviously obeying Herr Richard Marsh and his Battle of the Bulge supplement. You can see it here:

One of the intriguing points in the Bastogne siege is how the 26th VGD (Volksgrenadier Divisions had around 10.000 men) could have besieged a bigger and better quality unit like the 101st Airborne with 11.000 men during more than one week. If it is true that the 26th VGD was not alone, counting with other units of the 47th Panzer Korps, it is also true that the 101st was not alone as it counted with tank, Tank Destroyer, stragglers  and many artillery units.

Eventually many other units participated in the siege on both sides, some just passing by, making countability more difficult.

To increase problems many sources, including the CO of the Division, Gen. Heinz Kokott, place the 26th VGD at 17.000. But how can a VGD be 17.000 strong if its organized according to the 1944 OB for infantry with only two battalions per regiment, so less than 10.000 men?

After looking a bit everywhere, mainly in internet forums where other people placed the same question,  the solution seems to be that the 26th VGD had a big Feldersatz Battalion (FEB) of several thousand men, used as replacements for the numerous casualties expected in the Ardennes campaign, something that really happened. A bit like the assault companies of US infantry for D-Day, reinforced at 50% as they also expected a high volume of casualties.

The difference between the 10.000 paper organization of a VGD and the real 26th VGD 17.000 men strong makes you build at least four new battalion sized forces that you can see in the big picture above: three infantry battalions and another one at the top, with the Hetzer tank dividing it, to reinforce the Pioneer and the Fusilier battalion of the Division.

Most of the figures are old plastics from Airfix, Matchbox and Revell with a few newer PSC and some metal from SHQ and Irregular Miniatures. 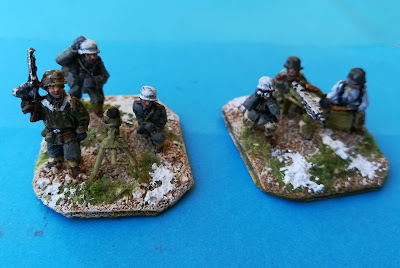 Some stands of Irregular Miniatures 80mm mortar and HMG. 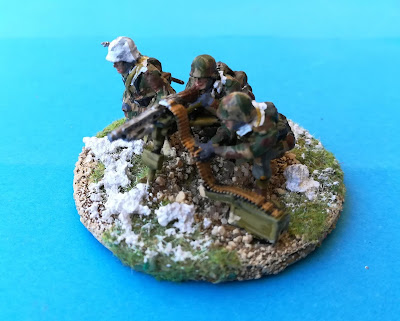 The PSC cleverly engineered solution for the HMG. 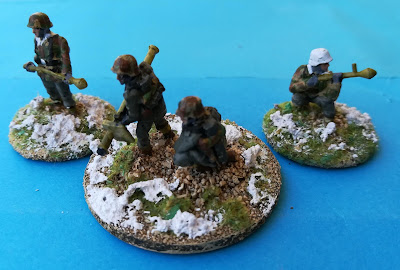 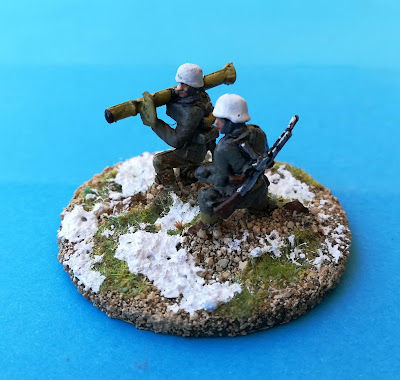 Some conversions also made are the support figure for the Esci Panzerschreck made out of two figures from Matchbox with the MP44 assault rifle from Armourfast. 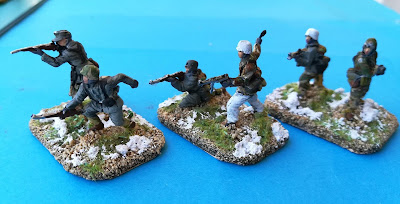 Airfix and Revell living together in harmony. The Airfix figure comes from the DAK box but with gloves new uniform and camouflage trousers becomes a nice Volksgrenadier. 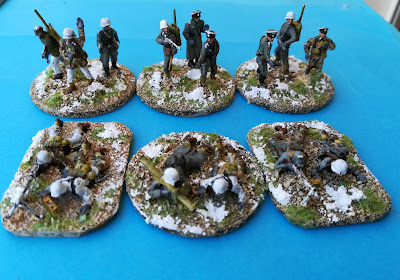 The Command stands have radios placed on the back of Esci and Airfix. The Officers are PSC, Esci, Matchbox, Fujimi (the greatcoated one) and SHQ. The lying down figures are Armoufast, Revell, Airfix and Matchbox. 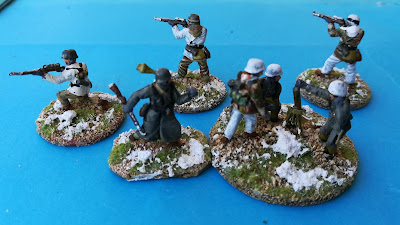 Esci and Revell for the snipers, Revell for the Pzfausts. The 80mm mortar stand has an Esci (surplus from the Nebelwerfer set) and Matchbox figures, the kneeling one again a conversion.

For speeding painting I used the same grey colour for the gloves; webbing was all black, haversack and canvas gaiters were all khaki, etc. Also the camouflage schemes were generally the Field Grey jacket, the camouflaged or white smock and the same for trousers and helmets. 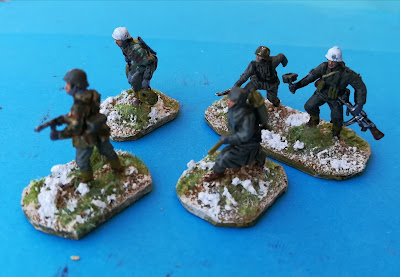 Pioneer from Revell lead by an Italeri figure. 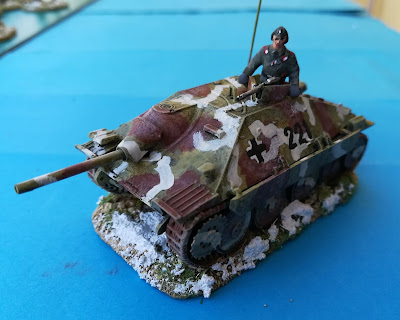 This is my fifth Hetzer, a bit too much as only three are necessary for the Anti-tank battalion. The camouflage comes from Osprey campaign 145 about the Bastogne events. With one extra Hetzer it makes two companies and with this big FEB may be I start also another VGD as two are necessary for the St Vith actions.

Next: have no idea. Better, too many ideas but don't know what to choose.

Posted by João Pedro Peixoto at 12:49