These are the last two battalions for the Georgian Light Infantry Brigade of 2008. The unit is more or less complete. It has up to now:
-  Three battalions of infantry like the two in the picture plus the mortars that are already shown.
- Three BMP-1, three BMP-1U Shkval and three land Rover (last two groups in this big picture) as IFV and infantry transport.
- One battalion of T-72 SIM tanks (6 models, maybe one missing for command).
- One battalion of MLRS (3 BM-21 models).
- Six Dana 152mm SPG's.
- One Humvee and three Digdoris  for reconnaissance. 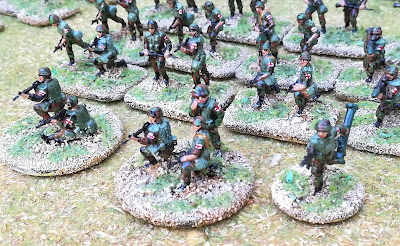 The infantry is the usual mix or Revell and Esci moderns with a few old metal Skytrex in the command stands.

Next: ACW and for quite a long time as I will be posting the armies of Gettysburg for the Fire and Fury rules systems.
Posted by João Pedro Peixoto at 10:27