General Pender's Division forms its battle line against Doubleday's Corps in the afternoon of the first day of battle. To the front Lane, Perrin an Scales' Brigades sprang the attack with both the Hagerstown road and the Chambersburg Pike forming an arrow pointed towards the enemy. To the back, as reserve, there is Thomas Brigade.

Lane's Brigade is represented here by the 28th NC. All figures are charging and are taken from all possible brands.

Thomas Brigade is here the 45th Georgia, again with a mix of brands this time in more relaxed poses.

Perrin's South Carolinians have the 1st SC Rifles as its representative unit. Again many brands forms what is intended as a firing line. 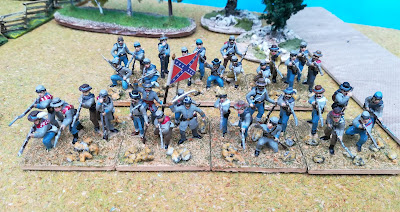 Scale's North Carolinians have the 13th NC as its representative unit with an all Italeri brigade. 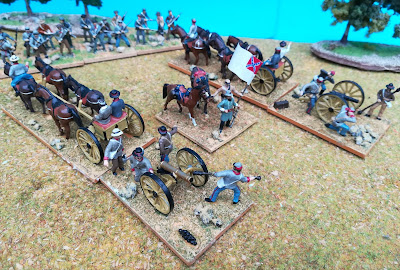 Maj.Gen.William Pender surveys the advance of its Division in the middle of the fire of the Divisional artillery. Pender's figure is the many times useful Revell officer. The artillery is Imex with the usual head swap.

Next: A small break in the ACW for my latest build, the Companhia de Engenharia (Engineer Company) of the BrigMec.

Posted by João Pedro Peixoto at 12:52