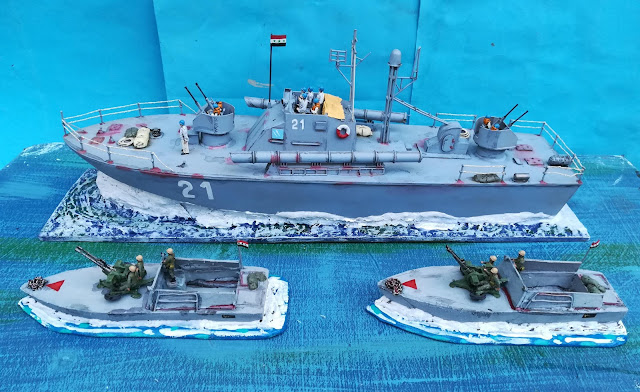 On the night of 29th January 1991 the Iraqi navy tried one of its two daring and courageous sea raids of the war. For that the Iraqis used 17 'small Patrol Boats' from which infantry was landed in Saudi Arabian territory in order to support the attack of the III Corps at Khafji. I could never find any information about exactly what these PB's were. Recently I found these pictures in the web: 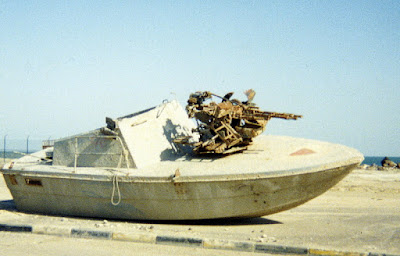 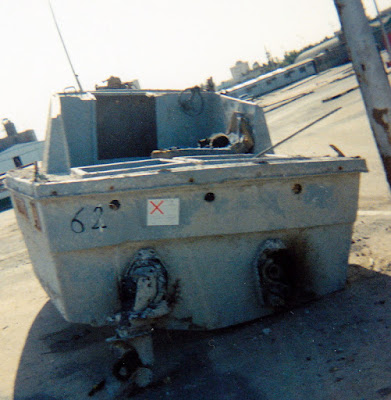 They came under a Google search for the Iraqi Swari Patrol Boats and they were referring  to an abandoned Iraqi PB at Ras Al-Ard, Kuwait in 1991. I'm not sure that these kind of PB's were the ones on the 29th of January raid but as I have no more information I had a go at scratch building a couple of them.

The P6 Torpedo Boat that goes along the two PB's on the first picture already had its article two years ago. If you want to visit it you can go to: 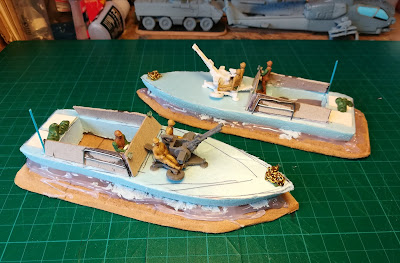 The PB's are apparently indigenous designs but not even that I'm really sure. I used Blue Foam to get the basic shape of the boats and some card for the driver/troop compartment. The figures are Modern Esci figures, the ones holding a MG42. I used two of them as drivers with GreenStuff arms and four others as firers of the BPM ZU-23-2. The original pictures clearly shows the 14,5mm Soviet HMG instead but I didn't had them at hand. 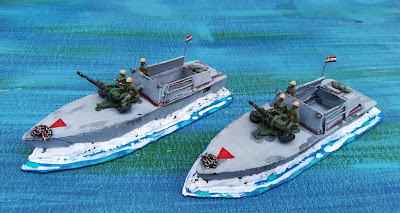 The boats were painted as close as I could to the photos of the real thing which includes a red triangle on the deck. So may be the raid was made by Republican Guard units? Never find any confirmation. Its just a thought. 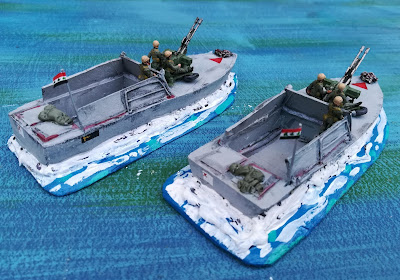 I made the troop compartment large enough for some six/eight figures each. 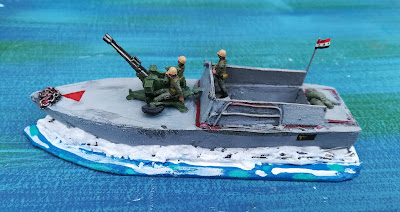 The usual anchor chain was added as well a small Iraqi flag. 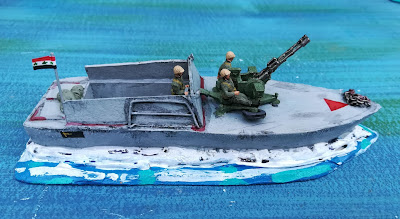 The sea was made of a mixture of hot glue and and some ready to use plaster  I had around.

This raid finished very badly for the Iraqis as the PB force was completely destroyed at sea by RAF Jaguars. Maybe due to the level of destruction this force suffered there aren't many details available about the 'Khafji Patrol Boat Raid' (as I call it...).

Posted by João Pedro Peixoto at 13:20