Anderson's Division was composed of five Brigades from Alabama, Florida, Georgia, Mississipi and Virginia and here is prepared to finish Sickles' salient on the second day of battle. 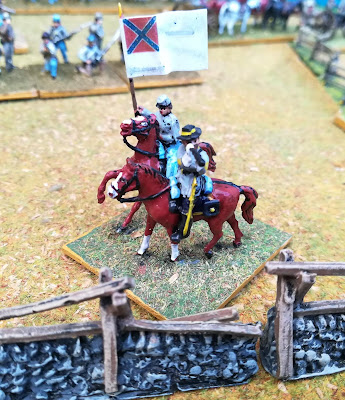 Gen. Anderson is a figure from Italeri with a resin Airfix copy as Divisional standard bearer.

Wilcox Brigade is made of mostly Italeri figures with the usual conversions and head swaps.

The smallest Brigade in the ANV was Lang's Brigade. Figures from all brands including some metal  Irregular Miniatures.

The same for Wright Brigade of Georgians.

Posey's Mississipians is another mix of brands. By these days figures started to get scarcer and some bases got only three poses and even a few figures are firing pistols...Mahone's Virginians had their picture erased inadvertently but they are very close to the picture above even sharing the same basing the only difference being that Mahone's has one more stand. 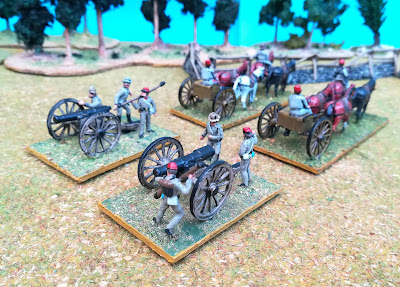 Divisional artillery mixes metal and plastic and also some infantry recruited to man the guns and suitably converted.

Next: Lee's HQ and some cavalry to finish this Gettysburg series.

Posted by João Pedro Peixoto at 12:17