This post start a very long series of probably over 20 post dedicated mostly to the 3rd Iraqi Armoured Division ('Saladin's' Division) but also to other units of the Iraqi III Corps during the war of 1990-91, like the 5th 'Mohammed al-Kasem' Mechanized Division. With little effort the same models can be used for most of the Iran-Iraq War of 1980-88 and up to the 2003 Iraqi Freedom operation, that is, the US invasion of Iraq.

I chose this Iraqi Corps because its the one that participates in the Khafji battle and ends up fighting with the majority of the big allied units: 1st UK Armoured, 1st and 3rd US Armoured, etc.

Another resaon is the great article by Cookie Sewell on the Saladin's Division on Military Modelling magazine Vol.30 No.8. Along 10 pages you can find almost everything on how to model this division.

The Saladin's division was one of the best Divisions of the Iraqi Army, almost equal to the Republican Guard division, equipped with the best Iraq ground forces had: T-72 tanks, BMP-1's and 2S1 and 2S3's artillery systems.

I'll start with the 1st Armoured Regiment of 12th Armoured Brigade of the Saladin's division. 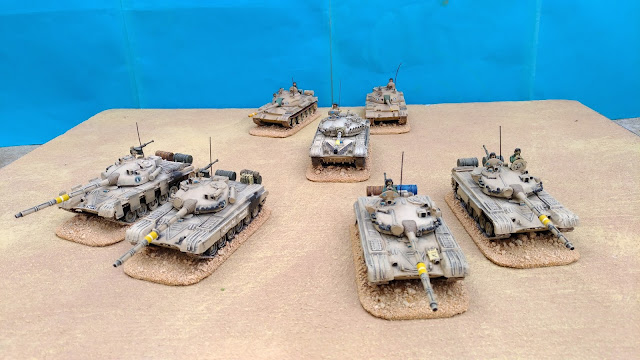 In spite of using the British term 'Regiment' the Iraqi tank units (in fact all branches of the armed forces) were mostly organized in the soviet style of three companies with a total of 35 tanks, thus 7 models for the Rapid Fire! set of rules. 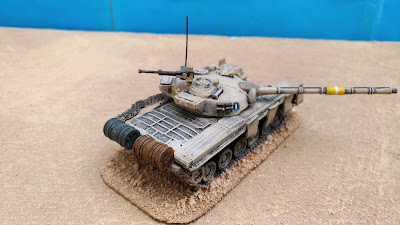 Four of these T-72 are in fact conversions from the Revell's T-80 (first row, first picture). Many years ago the model of the T-72 was rare and, few months before the UN intervention started, there was the suspicion of the Russian T-80 have been sent to Iraq. Even the well informed French magazine Defense et Armement, included the T-80 as a potential weapon of the Iraqis. This led me to buy all Revell T-80s I could find. After finding it was false I had to do something with some 10 of them. So I converted them to T-72s. 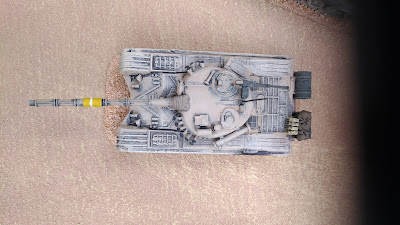 I used my trusted EverGreen plasticard to build the 'V' shaped optical protection to the front; the engine grill on the back and plenty of parts in the turret: smoke dischargers; snorkel; fire extinguisher and searchlight. Also the side skirts suffered some changes as well as the drums placed at the rear. Like this they look like the T-72M or the 'Assad Babyl' T-72M1, built from knock-down kits supplied probably by Poland. The one on the second photo is an early version with gills instead of the rubber skirts. 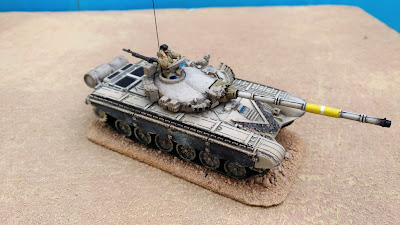 The command tank of the Regiment is a Forces of Valour model. Impressive and expensive the model has some mistakes namely on the height which is too much. 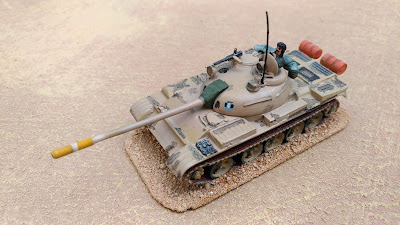 Finally the T-55 was still present in the Division and would probably have been replaced if the Iraqis had more T-72s. All the T-55 of this Division are metal Skytrex. They are simple but nice renderings of the real tank.

Next: prepare your self for many posts like this one or change to another cable TV channel.
Posted by João Pedro Peixoto at 09:56