These two WN's controlled E1 entry and, maybe due to incomplete works and sheer distance to WN63, WN 64 became one of the 'soft spots' of German defences something the americans used to their advantage. 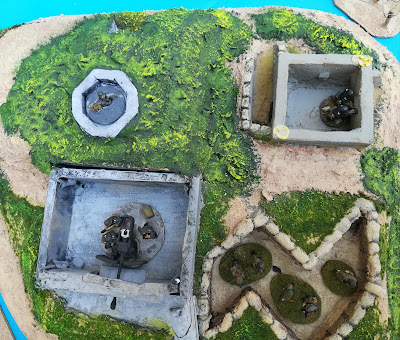 The 'uncovered' defences of  WN 65: a bunker with a Britannia 50mm gun; a 50mm mortar in Tobruk (Esci conversion) and a MG 42 from Britannia in another Bunker controlling the Access to E1. 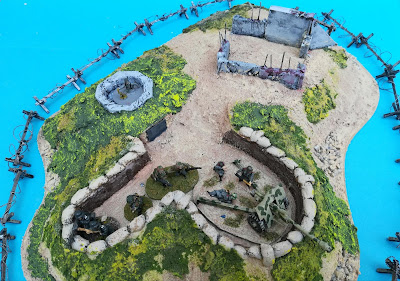 Now the 'soft spot', WN 64. All its defences are on the open with the bunker to house the Russian 76,2mm gun still far from finished. I scratch built a Russian 76,2mm (SHQ crew) field gun instead of an Infantry Gun by mistake. I'll try to find the one from Zvezda in order to correct this mistake. 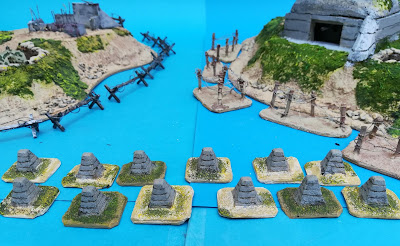 E1 entry. Here you can see the two types of barbed wire I used for this scenario. To the left you can place that one over rough terrain as it has no base. On the right, the barbed wire with sandy bases is better on the beach itself. On the center the Dragon's teeth are Britannia.
Next: as I don't want to have my pants on fire its time for the American Landing Craft.
Posted by João Pedro Peixoto at 15:58