The battle of Maipo, 5 April 1818, was one of the largest battles ever in South America. Around 10.000 men, more or less evenly divided between the Spanish Royalists led by general Osorio and the Liberation army led by the famous General José de San Martin, fought  until almost half of these men were casualties. This battle marked the end of Spanish rule in Chilean lands in spite of the colonial domain in other parts of South America continued for some decades more.
Due to its size Maipo allows to paint and model plenty different units both Infantry and Cavalry in different and colourful uniforms. Don't forget to google sentences like 'uniformes independencia chile/america del sud' for instance in order to find plenty of fine information in Spanish language on these wars. Even if Spanish is not your strongest feature the images will help you a lot. 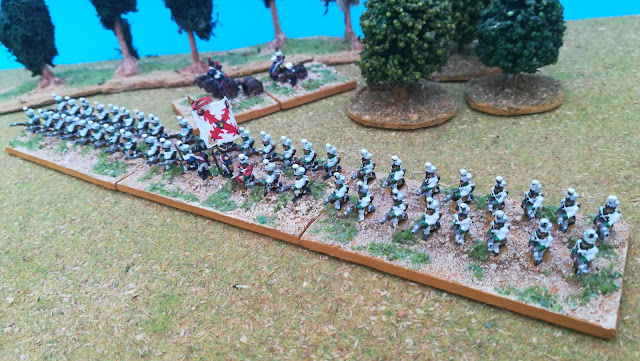 One of my first units to be finished was the Burgos battalion. The uniforms of the Spanish were mostly white with colar and cuffs of regimental colour making them easy to paint. The flag is hand painted. This battalion had almost 1000 men at Maipo and thus the three bases with total of 48 figures. 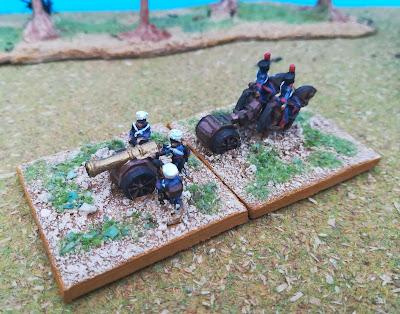 The artillery piece is made of the full artilery gun with artilleryman plus two infantry figures with rifle taken out and in one of them replaced by a ramrod.
The artillery limber is another gun without the gun tube and with two cavalry figures pulling it. 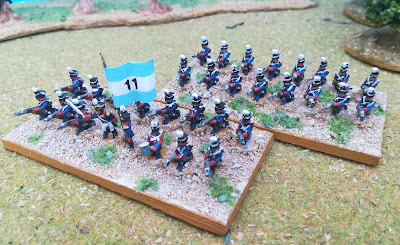 The 11th Argentinian battalion had around 450 men, typical for a 'Liberation' battalion and was smaller than their Spanish counterpart. Again a hand painted flag with its battalion number showing clearly something all armies should have done to help future wargamers. 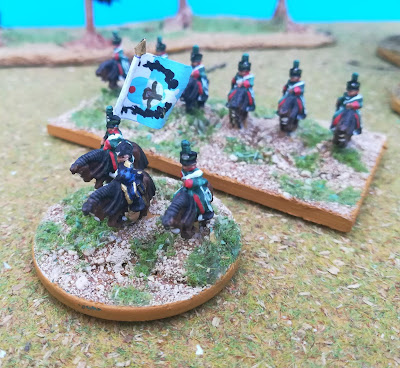 General José de San Martin himself with escort. The shako of a cavalry figure was heated, squashed with the fingers and then cut to the shape of a bicorne. 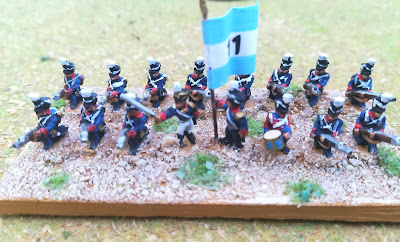 In the center of this base you can see the main changes to the infantry figures. The officer was cut out of the cannon and a small plastic piece placed as a sword and the same happened to the standard bearer. The drummer is a standard infantry figure with a small cylindrical piece of plastic attached.
Next: an interruption for my Anglo-Zulu war in 20mm.
Posted by João Pedro Peixoto at 09:53