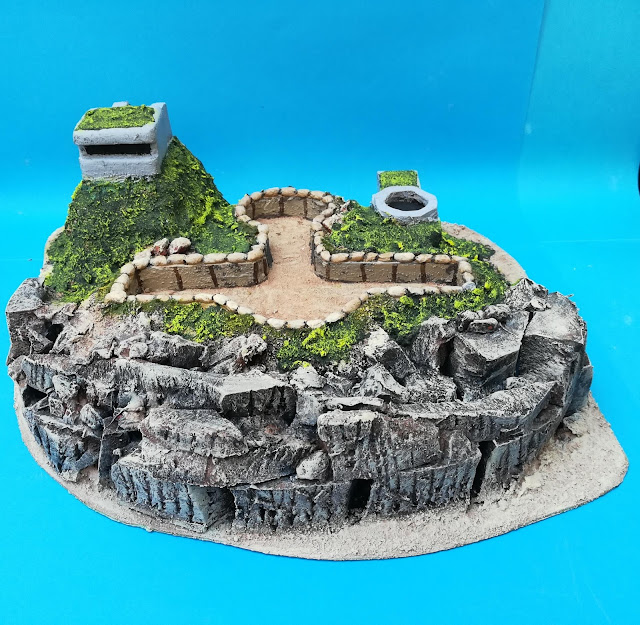 This the last post of this series about the Omaha beach scenario. Sixteen posts ago I started to show you the western German structures, starting withWN 73, and now I'll lead you to the easternest of them all, WN 60.
This one frankly was a little made up. Only the cliffs and the OB that Colin Rumford ordered are a real try to capture our usual compressed reality. All the rest is probably closer to 'Guns of Navarone' than anything else. In spite of having a nice plan of the WN 60 I opted for the high OP and cross shaped trenches which will leave our nice Pope Francis absolutely delighted. 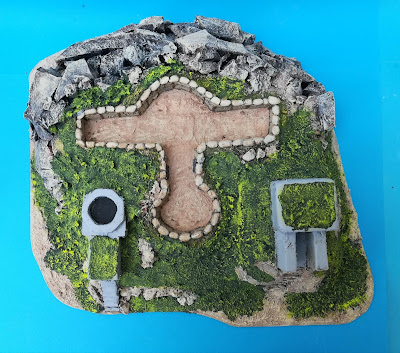 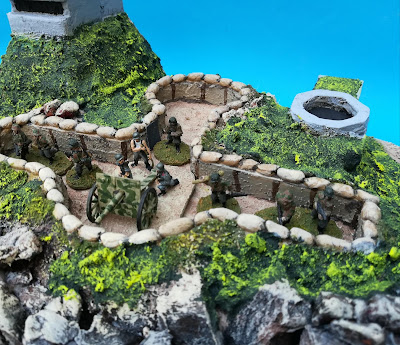 The manned trenches with an all Irregular Miniatures crew. In fact these trenches were not very effective as the cliffs in front hide many US survivors that reached them who would then attack this strongpoint from the rear. 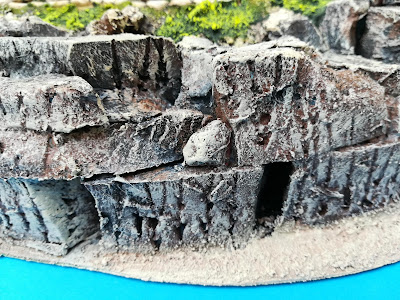 The cliffs are made out of hard Styrofoam as usual. I opened vertical cuts on it with a blunt knife so more crevices could show up. The cliffs were painted black, then dark Brown and finally sand colour with some true sand mixed in. Don't forget to add some PVA glue on each of these operations to garantee some durability of the painting. 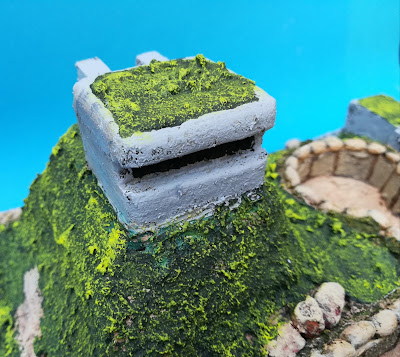 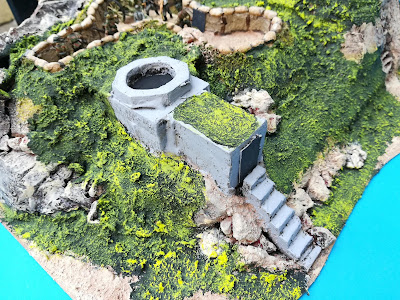 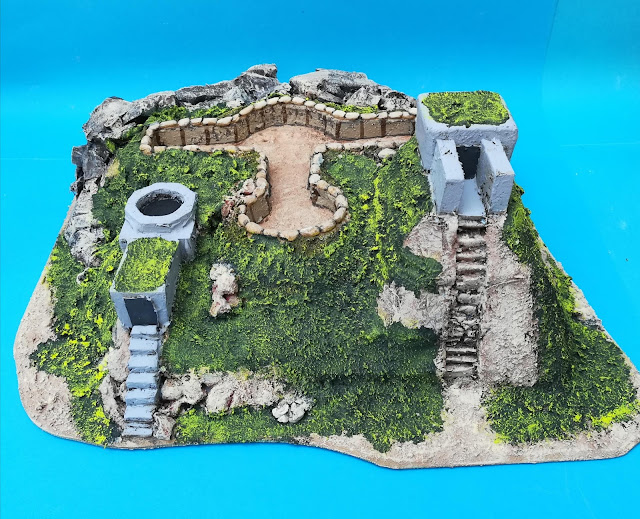 A rear view. Only three bombs from the preparatory aerial bombardment hit the German defences, but apparently one of them struck the strairs to the OP against my wish. 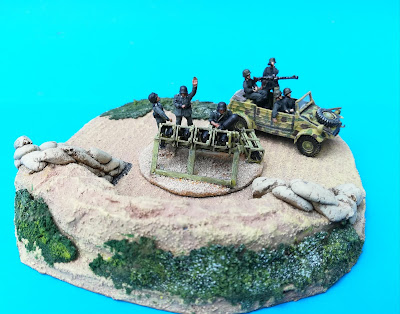 WN 67 was a Wurhframen (32cm rocket launcher) pre-sighted position with around 40 rockets. 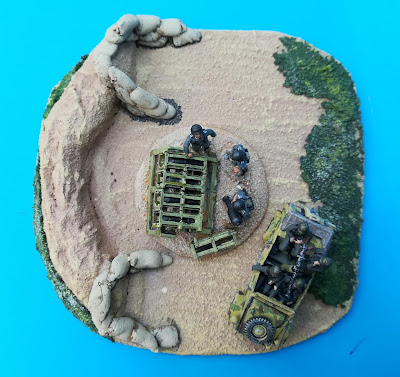 I built a ground metal stucture for four of them out of plastic card and added PSC and Hasegawa crewmen. The Kubelwagen is Hasegawa with Atlantic and Revell crew.
Here it ends Colin's WN's for his scenario on RF! book on D-Day. I've added WN 63, in fact a simple command company bunker on the road to Colleville-sur-Mer, and the Colleville Cemetery, today a big American cemetery with almost 10.000 US WWII servicemen buried there. 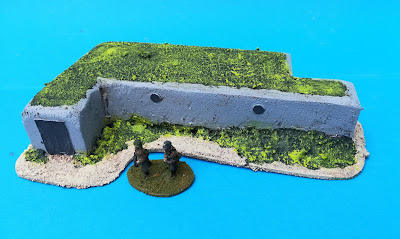 WN 63 was a simple bunker for transmissions and command. The very helpful book of George Bernage on Omaha Beach has some nice plans of it. 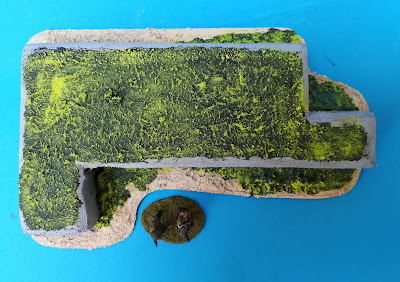 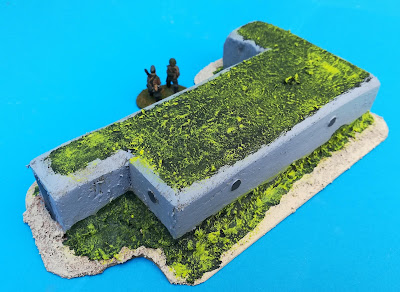 One solid block of styrofoam and some paper roundels for the respirators and card doors made the thing. 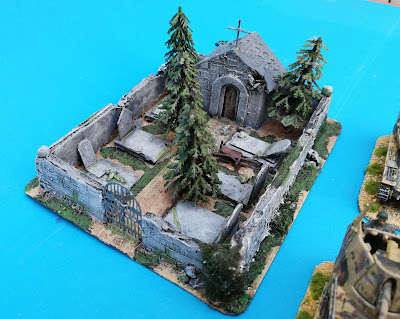 The cemetery is also an extra and may be the beginning of my Zombie wargames. It was made in card, birthday cake trees and a  photo etched door I had lying around. 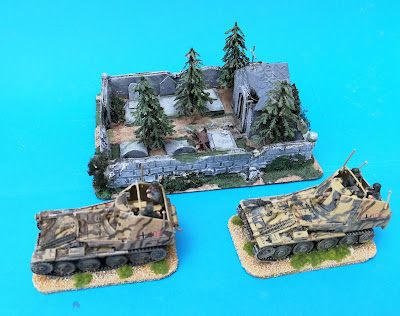 I took the oportunity to repaint two Altaya Marder III SP's and crew them with plastic figures for some of the reinforcements from 352nd Division.
As I told you this is the last post of this series.
As reference books for this series I used the inevitable RF! D-Day Campaign Guide by Sir - he and Richard should be by now - Colin Rumford   and also the Heimdal book on Omaha Beach by George Bernage. Mine is in French but there is also the English text version. For me its an invaluable source of information, with clear plans of US assault and German defences and some nice pictures of the real places.
Next I feel like going to South America and get rid of the Spanish (and Portuguese) rule in the beginning of the XIX century. First I was thinking doing so with 10mm Risk miniatures but that fever already passed and I'll do it with my beloved 20mm plastic Napoleonics. But to keep my RF! friends busy (which I know they are not) I'll soon start a series of posts about the British D-Day beaches.
Don't forget to support the mighty Sporting CP in its struggle  to defeat the horrendous Benfica and Porto, the two real faces of evil on earth! In particular Benfica (as my son is Porto) that has around 6 million supporters, they say, in a total population of 10 million. So if most of our awful forest fires are man-made it means most of them are ignited by Benfica fans. Obvious conclusion.
See you soon.

Posted by João Pedro Peixoto at 07:23