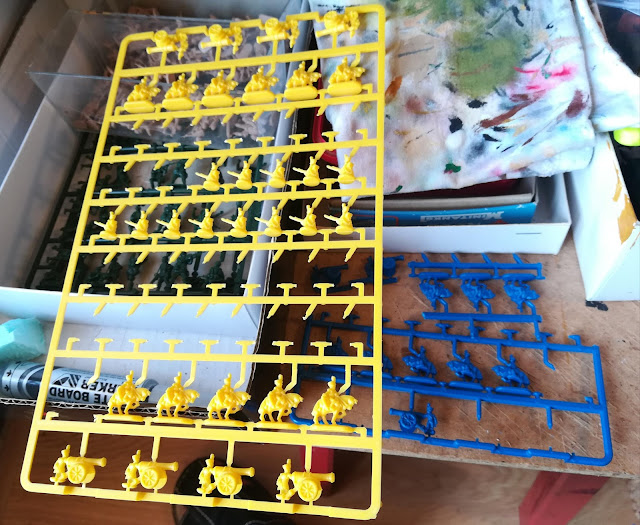 I the 80's I was crazy about playing Risk. Strategy, conquest and pieces moving from one continent to the other. I remember thinking 'If only this game had real miniatures'. And in the 90's they really came. Parker released a big game with no less than 360 Napoleonic miniatures 10mm tall. I was really hooked by these figures on those days. The level of detail and anatomy was very good and in plastic! The best material ever!
I bought one just to remember the good old days... than another just because one day two boxes can be useful... and another one because it was ... 2nd hand and cheap! I ended up with more than 1000 miniatures. Projects? Alamo, Peninsula, Waterloo. No, because all those minis had French style Shakos and turning them into Texans, Prussians or British  would be too complicated and all these ended up made in 20mm or 28mm. So they sat in my basement for another decade or so. Recently I looked for  a period of warfare where I could use them and both sides had French style Shakos and not many conversions would be necessary.
I really wanted to paint and model these ones and so I found the Wars of Independence of South America. Both Spanish on one side and Chileans, Venezuelan, Argentinian, etc on the other side had uniforms based on Napoleon's army and the battles and campaigns were very interesting and so I dove into the life of San Martin, Bolivar and others and learned a bit more from the history of the region. After all, learning is the aim of our hobby.
Each Parker game of around 1997 version (newer versions of Risk have XVIII century figures and the latest some new Napoleonics with rifles that look like a Bazooka) has six frames, each carries 40 infantry, 12 cavalry and 8 cannon. If you look on 2nd hand sites you can still find them. Besides with each one you find you have almost everything you need to wargame the period. And lastly, you probably have the game at home! 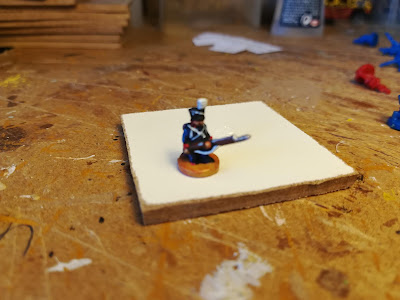 The only problem of this version from the 90's is that the infantryman is kneeling which is good for forming square against cavalry but a standing figüre would be much better. Well, we must do with what we have...
I painted an isolated one, just to see if I could still paint such a small thing. It turn out easy, the main difference from bigger sizes is the size of the brush which had to be smaller, that's all.

Then I made a number of conversions. Limbers from cut off cannons, as I saw from others in the Web, artillerymen with muskets replaced by ramrods, cavalry turned into flag-bearers (with some GreenStuff help) and generals with Shakos turned into Bicornes. The artilleryman that is together with the cannon was carefuly sliced from its gun and used as flag-bearers and officers. 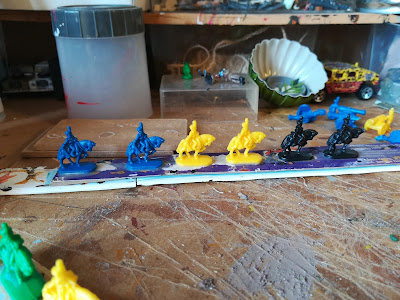 The cavalrymen are great figures and they will be used in almost all units of South America between 1808 and 1829. 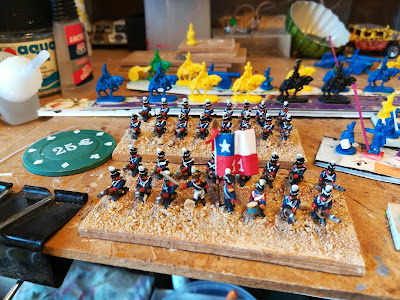 Here you can see some Chileans as line infantry and three conversions on the command base, an officer with a plastic card sword, a flag-bearer (these two are taken out from the cannon model) and a drummer with removed rifle and a small plastic cylinder glued. Normal plastic glue can glue this plastic making conversions easy. 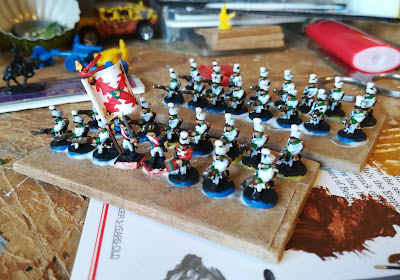 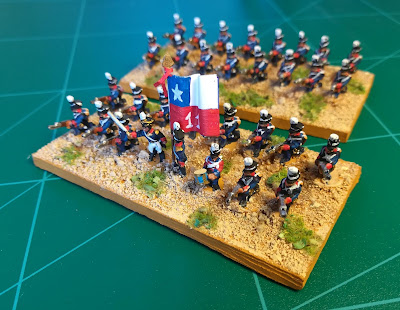 A fully painted and based infantry battalion will have 32 figures in two big bases each 8cm X 4cm. This number divides well with the 8 companies of a battalion of those armies. The big bases, Impetus style, are also nice as they really give the idea of mass and allow for a better modelled diorama-like basing.
The cavalry will be 6 figures per base of 8cm X 4cm and an artillery base will be one gun with 3 figures on a 4cm X 4cm base. 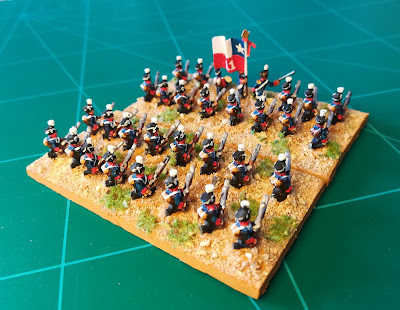 One last word for  the fantastic site of Steve Balagan. Its armies are 15mm but the level of research and the way he presents its models are not only inspirational but also a true source of information.
If you can write a little Spanish you can improve your findings on the subject as the issue is something obviously big for South Americans.
For now, and also depending on the availability of figures, I aim at representing both sides of the Battle of Maipo 1818, one of the biggest battles in the story of that continent which virtually made Chile independent. In the future, if the future let me, I will models the armies for the Northern campaigns of Bolivar.
Posted by João Pedro Peixoto at 14:35