A way to store and organize wargame models 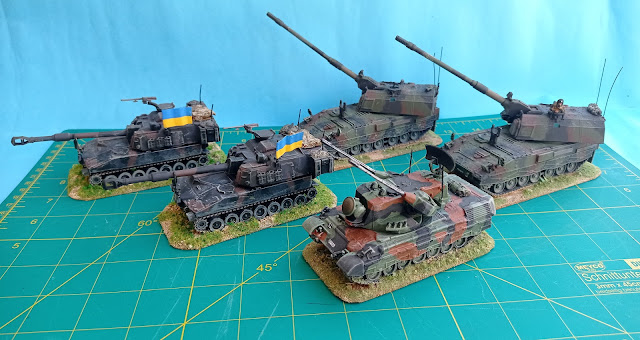 This one is a quickie as I don't have much to brag about. All models are Die-cast Altaya with extra antennas and figure on the Pz Haubitze 2000s and flags on the M-109s. The M-109 are the A6 Paladin model but close to the models the Ukrainians received from different sources. Only the Gepard was painted in NATO colors as it was green originally. Luckily the original paint schemes are quite good so a bit of black wash and some sand dry brushing and the erasing of the German crosses and licence plates  makes them good for the Ukrainians.

Next: More 2022 Ukrainian and Russians or a video on the way I organize the basement to store the collection, something thousands of you have been asking. Well in fact it was just one of you but that one is worth a thousand.

Posted by João Pedro Peixoto at 01:43 No comments:

The 17. SS Panzer Grenadier Division Götz von Berlichingen arrived Kampfwert IV, very diminished at Mortain, so it was placed under the command of the 2. SS Pz Division Das Reich division during the operation.
Panzer Lehr had its casualties during Operation Cobra exaggerated by its commander, General Fritz Bayerlein, so that the division would be able to rest. It somehow worked and the division was placed in the reserve during Operation Luttich.
Posted by João Pedro Peixoto at 07:25 No comments: 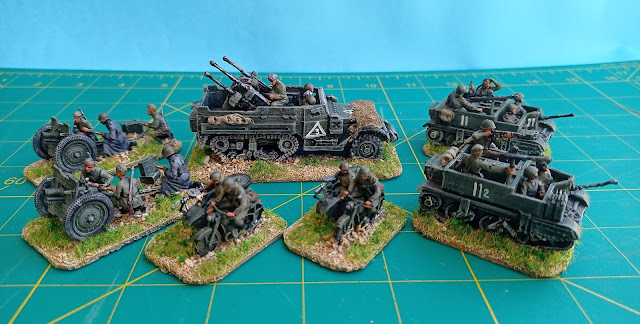 This one is just to complete some Russian OB´s where these four types of vehicles and guns were in short supply or didn't exist. 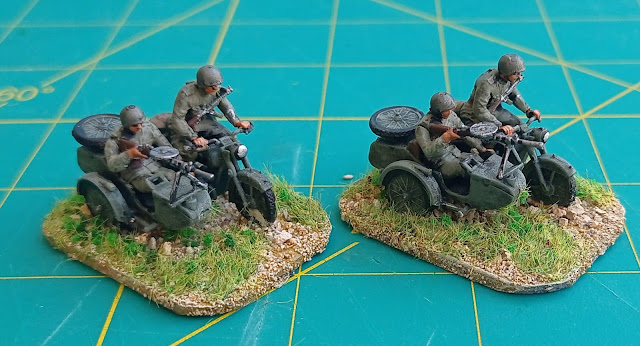 The M-72 motorcycle with side-car was one of the two more common motorcycle in the Red Army (the other one was the Lend-Lease Harley Davidson 42 WLA). The models are Zvezda.  Still need to apply some colour on the uniform insignia but not sure exactly which. 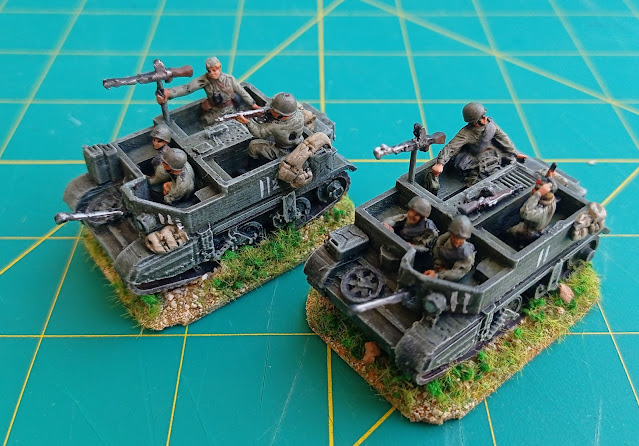 For Steve Shann´s book "Seelow Heights" you need a pair of Bren Carriers. The models are 3d PLA prints from Minigeneral and the figures are my own conversions from soft and hard plastic figures (Esci and Revell) with arms made of GreenStuff. 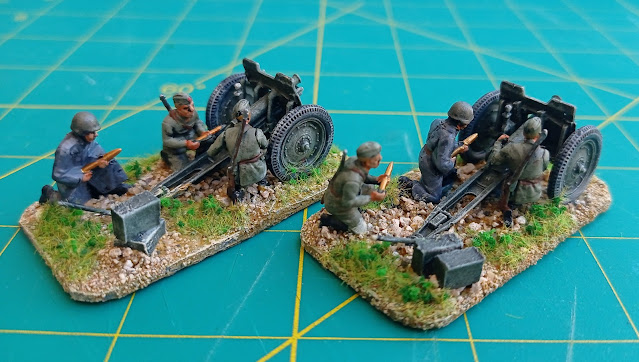 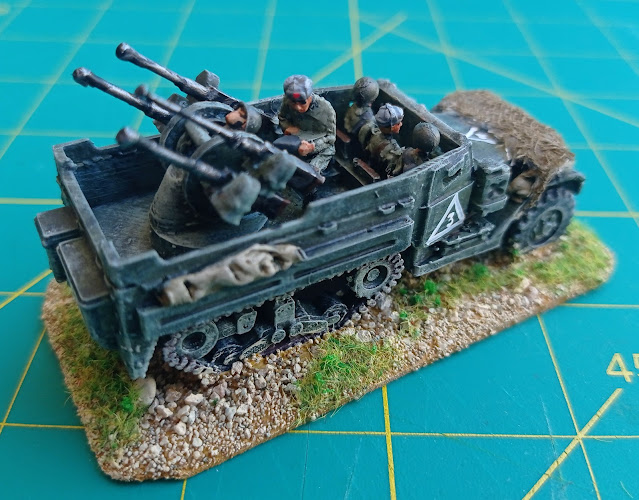 Another Minigeneral 3d print, a Lend-Lease  M17 MGMC based on the M5 half-track, again for Steve Shaan´s book.

Next: last part of the video on the Germans at Mortain.

Posted by João Pedro Peixoto at 00:45 No comments:

While the 116.PD was a newly formed division with plenty of problems and missing units (even if interesting in modelling terms with several old AFVs), the 1.SS PD LSSAH was one the most powerful units in the Mortain offensive, still with a big quantity of PzIVs and Panthers.
Note: when mentioning the Recce battalion of the 1.SS PD I say that it "was not present at the battle of Normandy" when I wanted to say it was not present at the battle of Mortain.
Posted by João Pedro Peixoto at 10:49 No comments:

The 2. PD was one of the best equipped divisions in Normandy. Even at around 50% the division was considered Kampfwert I for the Mortain offensive managing to get to the farthest point of the attack, at Mesnil-Adelée.
The 2.SS PD "Das Reich", famous for its war crimes, managed to conquer Mortain itself and its men tried hard to take Hill 314, from where Lt. Robert Weiss directed a murderous indirect fire on the advancing Germans.
Posted by João Pedro Peixoto at 12:46 No comments:

This series of 4 videos will show my way to build the German army that attacked the US lines in southern Normandy from the 7th to the 12th August, 1944. There are a total of 6 understrenght divisions - 5 Panzer and 1 PzGrenadier- with a total of 300 vehicles and artillery models and around 600 infantry figures (more or less 3 full strenght Panzer Divisions).
Today´s video is about the readings that inspired and helped to organize this large group of models and also the Web assets you can use to do this many times forgotten important battle of the Normandy campaign.
Next: the 2. Panzer division and the 2.SS Panzer Division "Das Reich" at Mortain.
Posted by João Pedro Peixoto at 06:53 No comments:

A late war Soviet army in 20mm for Rapid Fire! rules (to go along Shann'...

This is the third part of a series of videos on the Soviet army of WW2. This one follows Steve Shann´s book 'Seelow Heights' but can be used from the summer of 1944 (operation Bagration, for instance) up to Berlin itself. The models are all usual plastic resin, die-cast and metal brands and 3d resin printed vehicles.
A few notes : the Recovery T-34 are Atlantic conversions and the SU-85 are Fujimi which I forgot to mention.
Posted by João Pedro Peixoto at 01:04 No comments:

This is an incomplete Russian Mechanized Tank Corps (MTC) for the beginning of the German invasion of USSR (Operation Barbarossa). The Russian Mechanized Tank Corps was hastily created after the reports showing the success of the Panzer Divisions in the west. The problem was that it was too large and, coupled with the problems of Stalin´s purge on Soviet officers, subsequent problems of command and control, lack of radios and mechanical breakdowns, it became an unwieldy mass of force. Even so there were already the T-34 and KV-I and II in its ranks and this made the Mechanized Tank Corps a powerful opponent to the Panzer Division (even if at Dubno, for instance these modern tanks were less than 15% of the more than 3000 Soviet tanks in six MTCs ). The MTC is also an opportunity to field in the same armored unit vehicles like the BT-7 and the T-26, and the big ones like the T-28 and the T-35. They were fragile and old machines in the battlefield but become great miniatures on the table or shelves.
The models are Fabbri, Esci, Matchbox, S-models, MiniGeneral, Fujimi and 3d resin prints, including some conversions, mostly turning a group of T-4/41 into the 1940 model.
When I mention a converted T-26 at the beginning of the video I forget to mention that its based on Polish 7TP as both shared the basis of the Vickers 6-ton chassis.
Posted by João Pedro Peixoto at 11:28 No comments:

These large two units, two Russian 1943 Tank Corps, have been on the making for ... hmmm, decades by now. It includes plastic kits made almost 40 years ago and 3d resin prints with a few weeks. The vehicles are Frontline Wargaming, Britannia, Esci, Matchbox, Fujimi, Dragon, MiniGeneral 3d prints, resin 3d prints, Kooperativa, Armoufast, Atlantic (these last two includes some crazy conversions) and Altaya die-cast. The artillery is mostly Irregular Miniatures, Altaya and conversions. The infantry is a mix of all available plastic brands with a few Irregular Miniatures and Skytrex.
Posted by João Pedro Peixoto at 11:29 10 comments: