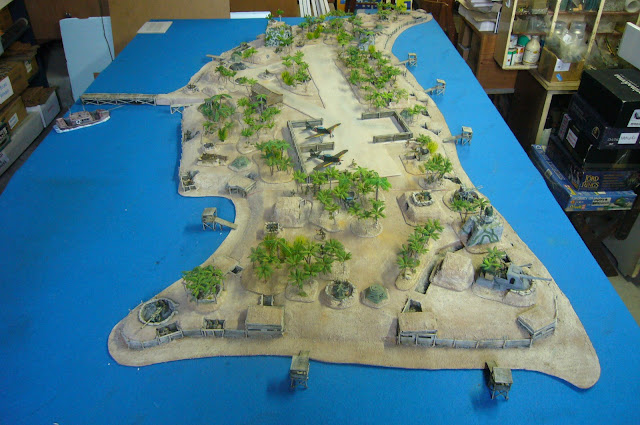 I took some detailed photos of my Betio/Tarawa wargames table prior to the american 20 November 1943 landings, with the japanese dug in waiting for it... One of these days everything will have to be stored to prepare one more wargame (destined not to be wargamed, as usual).

This layout is scaled down to Rapid Fire! figure and weapons organisation. 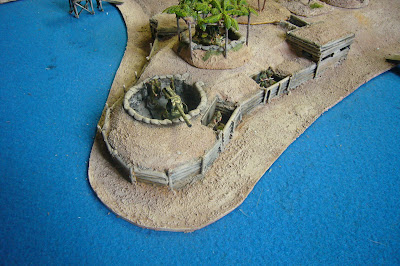 The northwest defences with  140mm naval (open revetment)  and a 70mm AA. 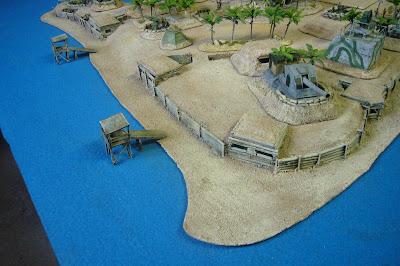 Opposite south. An 8 inch gun with its searchlight. 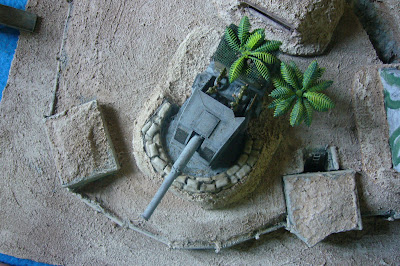 The crew of the 8 inch are old Atlantic figures transformed into artillerymen. 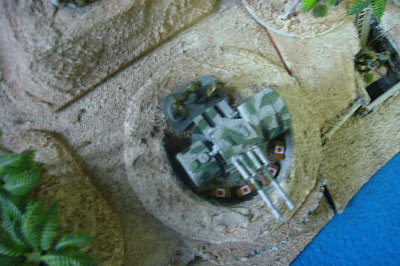 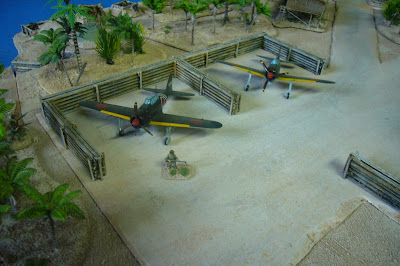 Two Zeros in the airfield. 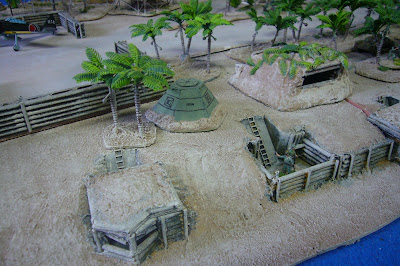 Several types of bunkers and dugouts  protecting the south beach. 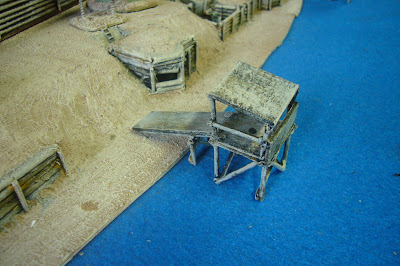 The latrines. Afraid of deseases ( there were 5000 japanese and Korean in the island) the japanese built this kind of latrines in the seashore. When the Marines landed they had bullets waiting and some strange things floating... small mines they thought? 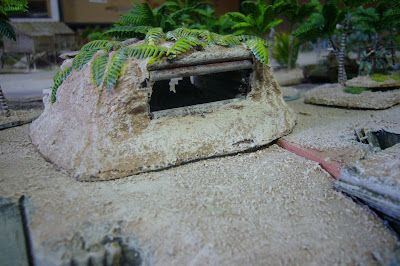 The protections for field guns. You can see the separation between the tiles on the right. The whole island is divided in three large parts for ease of storage. 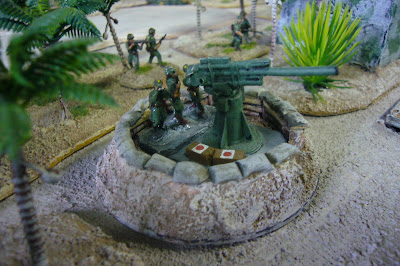 75mm model 88 in open revetment (Irregular Miniatures based but heavily transformed). The japanese soldiers are painted in a greenish tone as they are not regular infantry but SNLF (sort of, but not the same, as Marines). 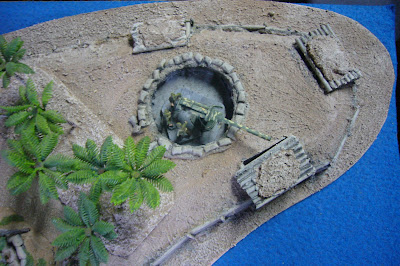 140mm naval gun in the east tip of Betio. 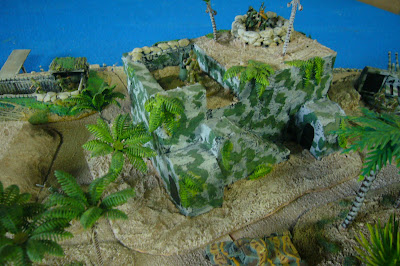 The command bunker with an Ha-go type 95 nearby. While in the outside in the beginning of the battle,  the japanese island CO was killed by US  naval guns. So the defense of the island was left without proper command. Even so the japanese inflicted thousands of casualties on the Marines. Just imagine if  Admiral Shibasaki had survived... 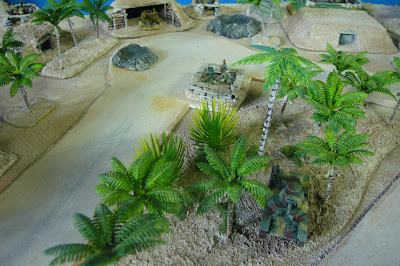 The east end of the airfield. Another Ha-Go  hidden in the coconut trees and some shell craters (Frontline Wargaming) near a 13mm MG (sandbagged position). 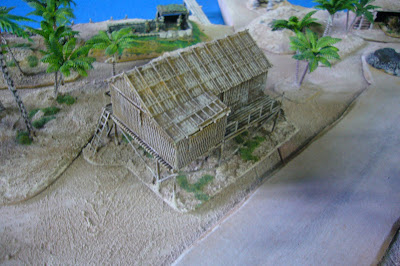 The Airfix house for the pacific. It had to appear. East end of airfield. 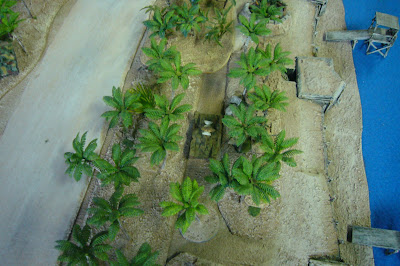 The 3rd  Ha-go hidden amongst the trees. 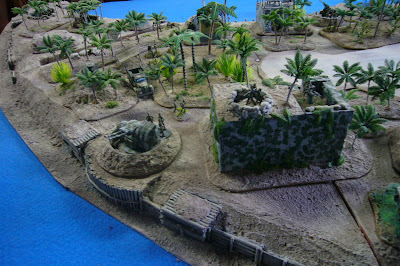 The east part of Betio with the Co post and another 127mm naval gun emplacement. 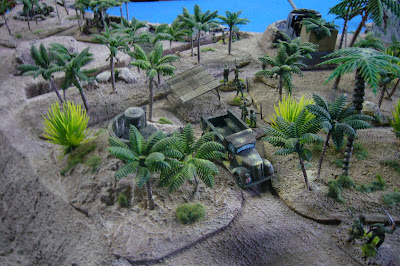 A range finder (left) and a truck (Fronline Wargaming) near a depot in east Betio. 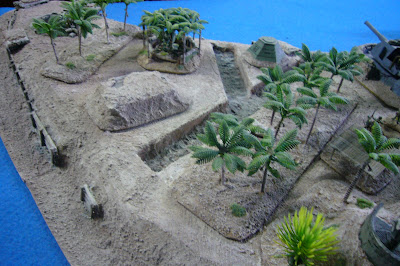 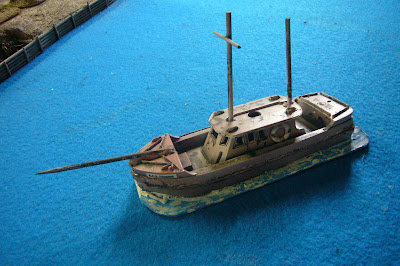 The sunken Nimanoa that made part of the landscape on those days. 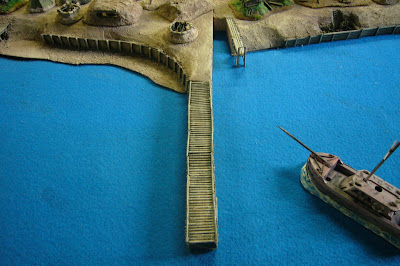 The main pier looking at the lagoon. 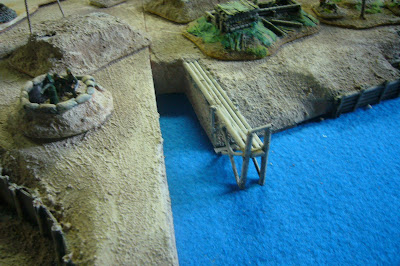 The secondary pier with a Frontline Wargaming bunker nearby. 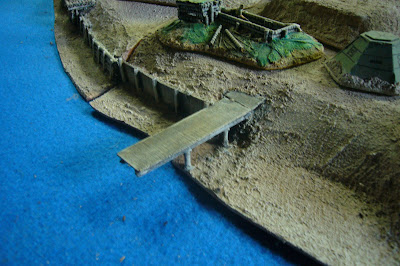 A third pier in the east. 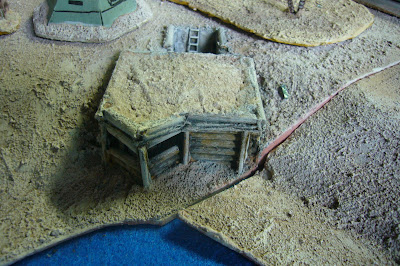 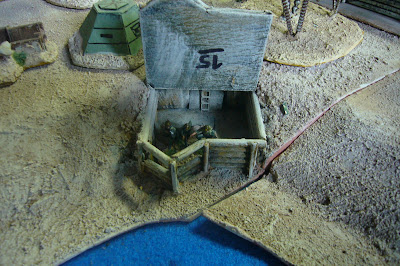 Open. All the closed bunkers have lift off roofs. 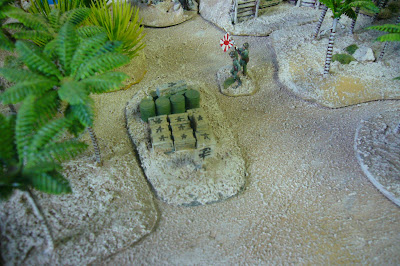 Another depot in West Betio. 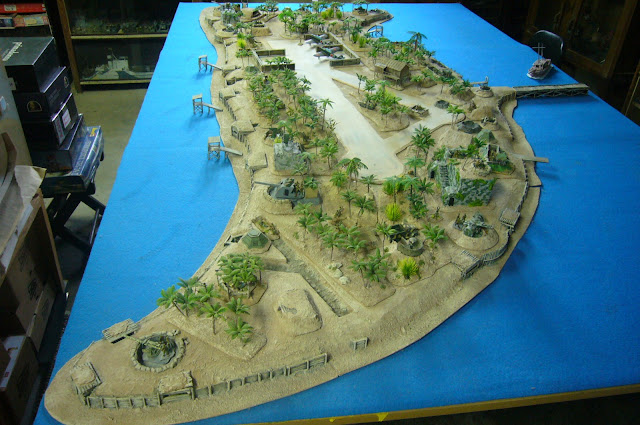 Betio from the east.

And that´s it. Most of the material showed is scratchbuilt in the most diverse materials - Evergreen; polistyrene tyles; wood, etc. The water is a tailored carpet. The trees were bought in two large bags in a pastry shop.

The pieces of terrain are all detached, as I intend to use some of them in other layouts, nevertheless they were built specifically for this scenario.

It took me some 2 or 3 months to build all this stuff. You need good information for accuracy and all the details were taken into account down to the last MG emplacement, its shape and size. In some books (Osprey campaign for instance) but also in the internet you will find loads of very good information, as the americans pay a lot of attention to Tarawa and the Pacific campaign having dedicated sites on the subject.  I dont regret a second all this work as our hobby is a great way to learn and detail the past in an unique way.

One of these days I will show you the Marines and their LVT´, LCI´s, LCVP´s and LCVBCFDSRPGFSTVBFDGRTS´s...and their Destroyers (yes, in 1/72nd scale)...

Posted by João Pedro Peixoto at 13:17