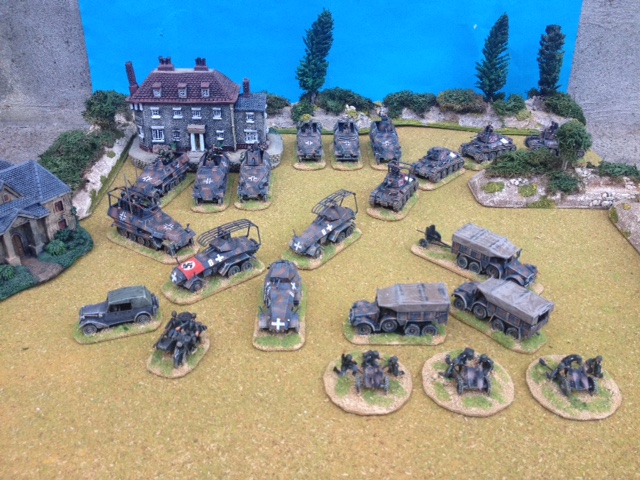 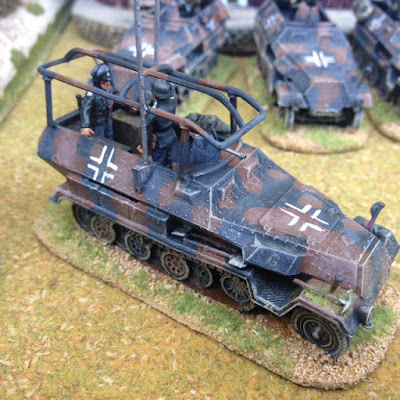 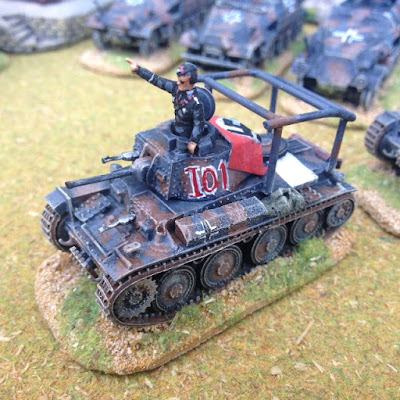 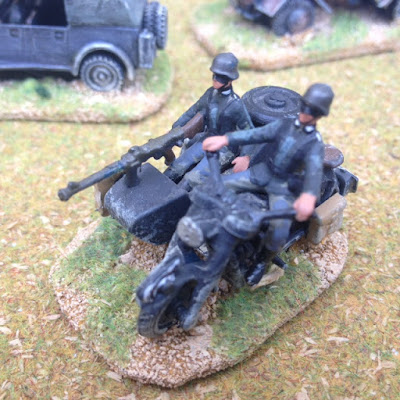 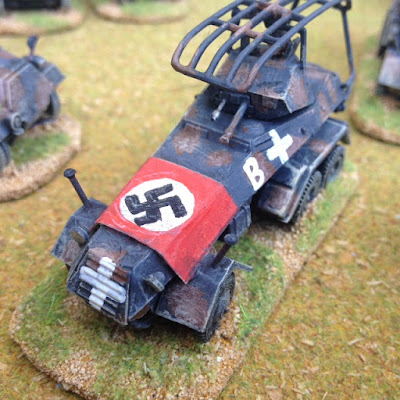 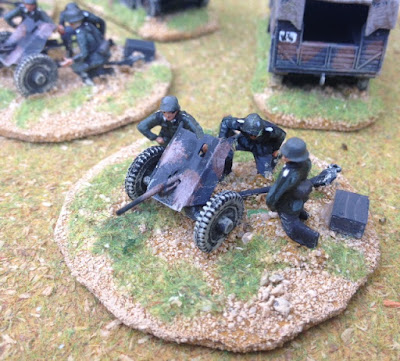 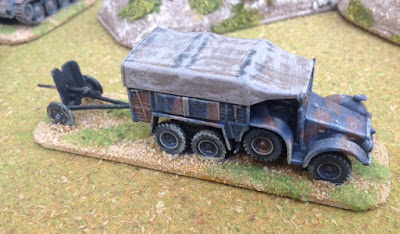 
With this post starts the presentation of my Gulf Wars ground armies. I have the full Iraqi 3rd Armoured Saladin division, the 5th Mechanized division and  many Qatari, Saudi, US and British  battalion sized units to show you. I'm in the process of basing the tanks for Rapid Fire! but basing is all they need so I hope to speed up the posts to keep your nails and hart safe... 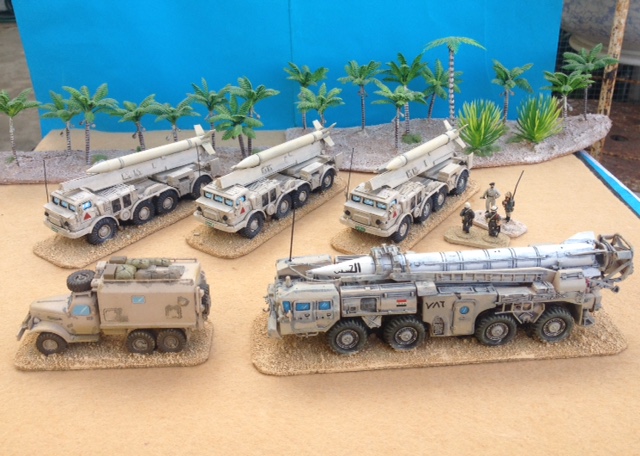 A Frog-7 battalion is parked while the even more famous Scud-B passes guided by a communications Zil-157.

The Zil is an ICM plastic model. The Scud-B is a resin ARMO model. The Frog-7 are conversions from the Uragans of the last post. 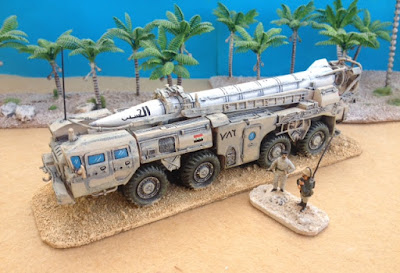 The ARMO model is a beauty. The amount of parts and detail forces you to use a careful painting. The figures standing by are ordinary command sections I'll show you when posting the Iraqi infantry. 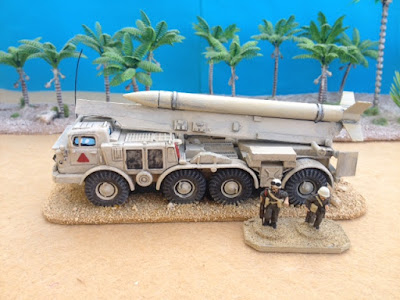 And here it is the Frog-7 with the famous red triangle of the Republican guard. All vehicles were painted Vallejo Iraqi sand. The missiles on the Frog-7 were painted buff as they appear to be in a different color I saw in photos of captured vehicles.


The Frog-7 (Luna M), ground to ground missile system, was one of the last vehicles I still needed for my Gulf Wars Iraqi army.

This vehicle exist in resin but its expensive and I wanted at least three.

Somehow I remembered not to place the missiles from the 4D Puzzle Model S-300 AA missile system inside their tubes. Without knowing I had the beginning of the Frog-7 as the S-300 missiles are similar in shape to the Luna M.

When the Fabbri/Amercom (not sure about the origin) showed up in Portugal with the name Veículos Militares the number 2 was the BM-27 Uragan which uses the same Zil-135 truck as the Frog-7.

After looking carefully at the plans the main changes are relatively easy to be done:

Take out the 16 missile pod and its support from the Uragan and use Plasticard tubing, rod and plate for most of necessary parts. 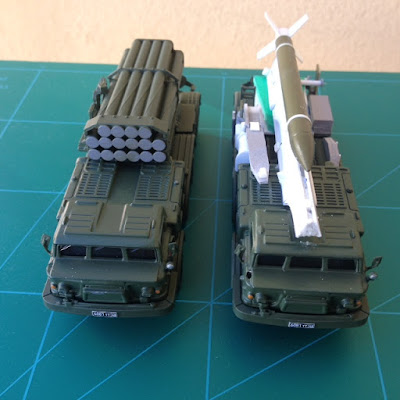 The launching ramp for the missile is in a triangular shape. Be careful with this part. I made mine 2 or 3 mm thicker and it shows. 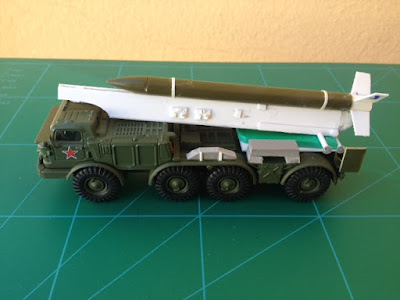 The end of the missile (from the S-300 AA missile) had to be increased in 1 cm for proper length. The missile elevator was the trickiest part. I burned and twisted a number of plastic parts until I got this ugly thing. 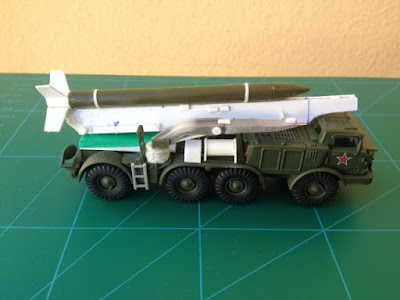 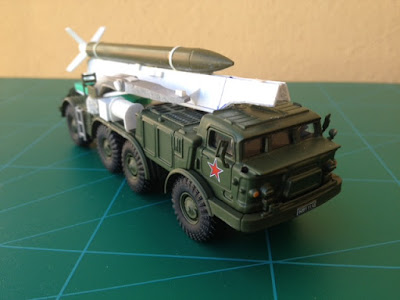 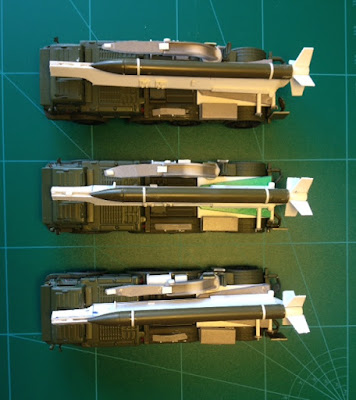 With all this scratch building no Frog-7 is exactly similar to the other but the final result is Ok for me. 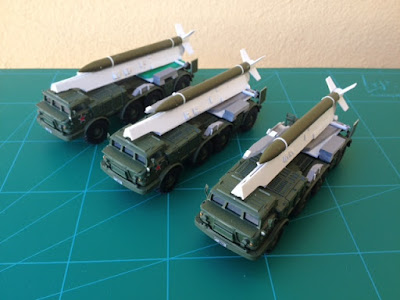 One of the most difficult parts in these diecast vehicles is to open them and extract parts as it is needed here. Find a screwdriver that fits ONLY and tightly in one of the three sides of the triangle and apply some strenght in order to unscrew it. 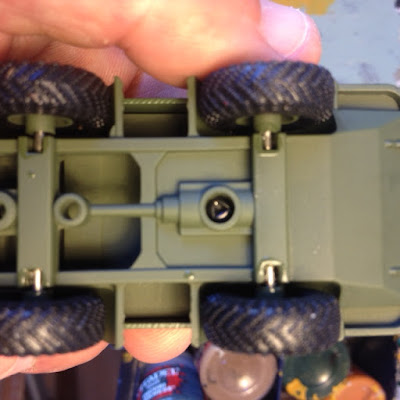 Most of the faults are hardly seen after priming. 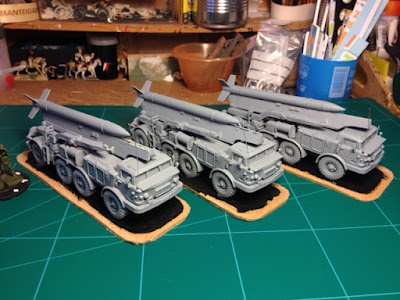 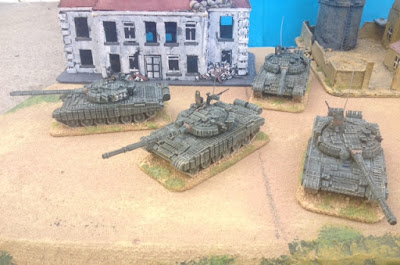 These models paints easily as the detail Mario Laranja placed is fitted nicely and the most compex parts like the frontal lights are simplified but still making their part. 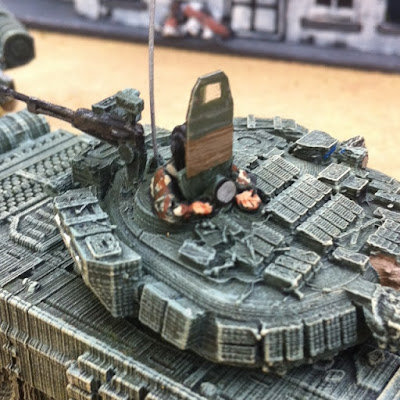 The turret Mg's are metal Skytrex.

Some seams from the 3D printer can be seen but in some places they even add to the detail!

Posted by João Pedro Peixoto at 08:05 No comments:


Last toys to arrive are these 3D prints by my friend Mario Laranja. In order to see his awesome work you should pay a visit to his blog

and drool at paper tank models, houses and such.

If you are close enough to Algarve you just yell his name anywhere and someone will lead you to him.

As soon as Brigada Tripeira spy network informed me that Mario had bought a 3D printer I asked him for 10 T-72 BV. I had the pleasure to pick from his house this first group of 4  and look at his fantastic latest material like other 3D tanks in 15mm and card houses. 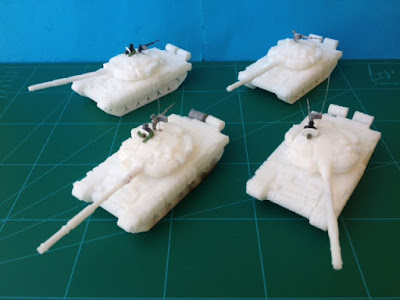 The only parts I asked him not to print were the MG's and the open turret hatches as I have some left overs from other models. 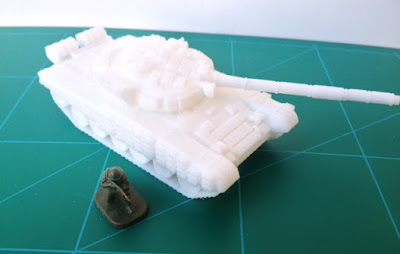 The white plastic doesn't let see the level of detail of these 3D prints but you will see after painting that these are really good. 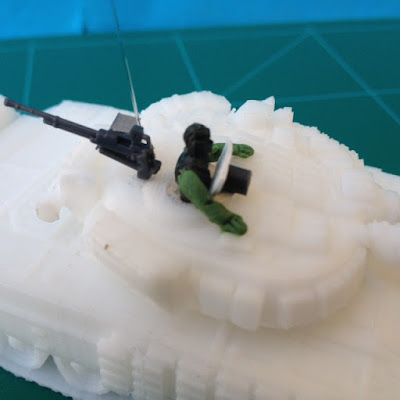 The usual few extras like antennae, MG and torsos with GreenStuff arms. 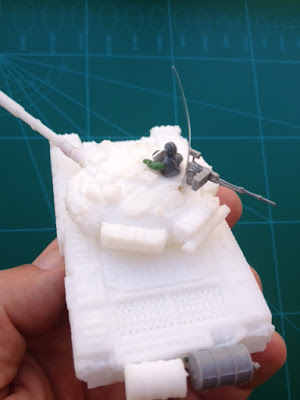 The final result is great and with only two parts - turret and hull - you can't have an easier model.

Posted by João Pedro Peixoto at 16:06 No comments: